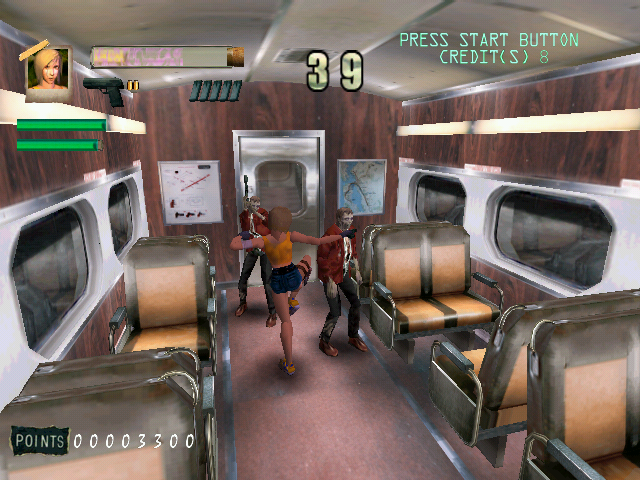 B-grade zombie flicks are a dime a dozen. Their poor production quality and acting is often seen as more of a benefit than a detriment. Sega’s House of the Dead series is a stellar example of this on account of this, being quite favored among rail shooter enthusiasts and comedy seekers alike. With over-acted, and poorly lip-synced ham in tandem with incredibly dumb writing, it’s hard not to enjoy oneself as the bullets fly. Perhaps this is the driving design decision behind a 1999 3D beat-em-up spin-off to the series bearing the incredibly stupid name of Zombie Revenge. 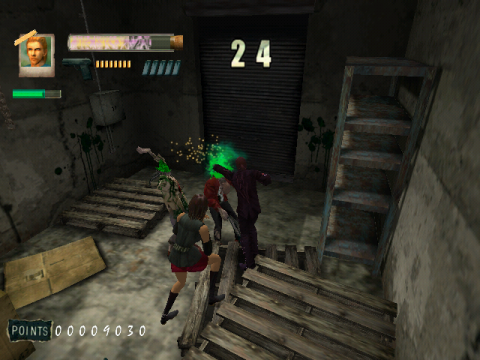 Set in loose continuity with the events of House of the Dead, Zombie Revenge presents the plot of a secret U.S. government effort. Rather than making arms, armor, ordinance and bullets, their goal was to make soldiers. The antagonist of the game who. in complete unoriginality. goes by “Zed” loses his parents to this project. His plan is to use the “U.D.S” or “Undead Soldier” project to wipe out humanity in vengeance, resulting in the still rather silly name of the game. The UDS project goes dark, a year later an outbreak of the UDS virus occurs in Woodside City.

To counter his efforts, the series regular organization known as AMS dispatches three agents. The first of which is the bafflingly named Stick Breitling. An agent in his mid-twenties, Stick is the balanced character. His parents were members of the organization GOD that participated in the UDS project. Linda Rotta is the second member of the team, being the youngest AMS agent at 22. Her hand-to-hand skills are lacking but she’s the fastest draw, able to fire bullets quicker than the other two. Filling out the third team slot is 32 year old Rikiya Busujima, a Japanese agent who understands but can’t speak English. Stick and Linda are fluent in both so the team can communicate without issue. Busujima is a hand-to-hand specialist able to wield ki and make zombies explode by forcing it into their bodies. 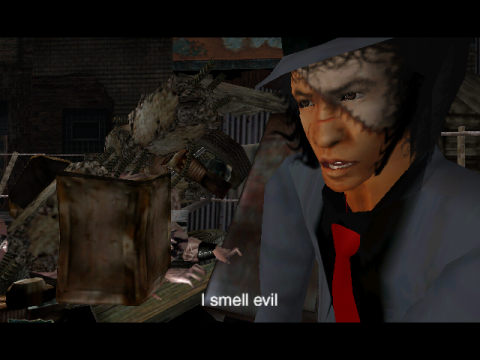 Stick and Linda fit in well enough the heroes from the House of the Dead series, but Rikiya is just crazy ridiculous. For starters, he’s modeled after actor Yusaku Matsuda, known for the crime thriller Resurrection of the Golden Wolf, as well as the late 70s/early 80s television drama Tantei Monogatari, complete with his distinctively puffy hair, except a ridiculously powerful, shirtless version of him. One of the alternate costumes even lets you dress him up like his TV alter ego. Also, his punches can set things on fire. Zombie Revenge was never a particularly popular game, but he stood enough to be included in the 3DS crossover strategy game Project X-Zone.

Bare fists and bullets are what the team brings to the situation, each brandishing a pistol and their own arsenal of close combat maneuvers. Zombie Revenge sports three buttons: punch, guard, and gun. Punch is fairly self-explanatory, with each character having their own combos. Some combos require the use of the Gun button despite not involving sending bullets at anything. When it’s not a part of a combo, the gun will fire upon the current target of the game’s auto-lock system. Holding one’s fire for a bit will cause the lock-on to graduate it’s color from blue to red, with fully aimed bullets being quite devastating. Holding the gun button will cause the character to wind up and expend five bullets to fire a penetrating shot that has unlimited range and high damage, though there is no auto-aim available for this. Ammunition for the gun is limited, but every single enemy in the game will drop bullets upon being killed so it’s difficult to run out. 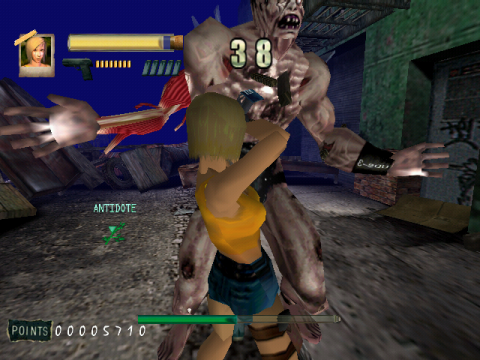 Enemies often come in large groups and while the repertoire of the team are formidable, sometimes some extra help is needed. Thankfully throughout the game there are many weapons to pick up and use against the oncoming hordes. From the humble machine gun to rocket launchers to the zombie-genre favorite flamethrower, there’s plenty of bullets and ordinance to even the odds. Many zombies will even come armed with long-arms and will use them if not dealt with quickly, a problem that can lead to taking a lot of damage very quickly. As the team take damage, in addition to their life bar decreasing, a purple haze will begin to fill into the bar as the infection of the virus increases its hold. If the bar becomes full, the character becomes poisoned. Their movement will plummet and their actions will be restricted leaving one in a very vulnerable state. The poison will wear out slowly over time, but can be dealt with more expediently by picking up the antidotes dropped by enemies alongside their many bullets. 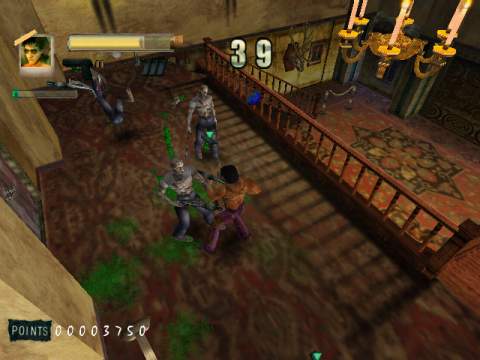 The enemy variety is largely standard slow-moving, brainless moaning zombie faire. A quick glance can tell the player everything needed to know. In addition to the walking and swinging variety, there are poison-spitters, weapon-carriers, infuriating tiny hatchetmen and more incidental varieties. The quantity of enemies is the primary threat you face as it can be very easy to be overwhelmed when faced with six zombies in a small room or hall. It is rare to take just one hit from anything as the hordes will not hesitate to pile on to the player and deal very serious damage to them very quickly. This becomes a focal point of the game’s shortcomings, as it is very easy to end up in a situation where the auto-aim targets something other than what would be a priority target, leading to taking damage. The worst thing the game can do is have an enemy drop a weapon under the character’s feet. While simply walking over bullets and antidotes will claim them, pressing either punch or gun will pick up a weapon, causing all attempts to attack result instead in picking up the weapon and getting hit. This problem is compounded if the character already has a weapon and thus will continually exchange weapons. If this happens while surrounded, and movement isn’t an option, it’s basically a death. 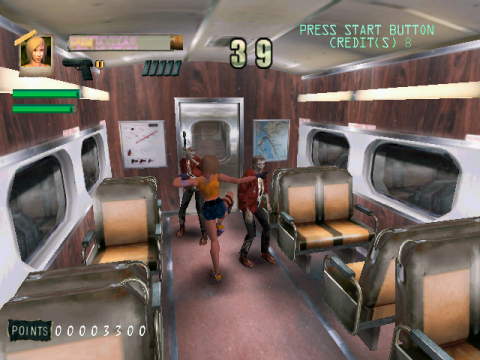 The graphics for their time are quite sharp and there’s tons of gory appeal as zombies can be catastrophically damaged when beaten or filled with bullets to the point that they explode in many gooey green parts. So saying, facial animations basically don’t exist beyond cheap mouth flapping which, combined with the bad character dialogue, makes Zombie Revenge sound appropriately B-grade. The music is mostly over-bombastic horror tracks that suit the setting but aren’t anything to really write home about. 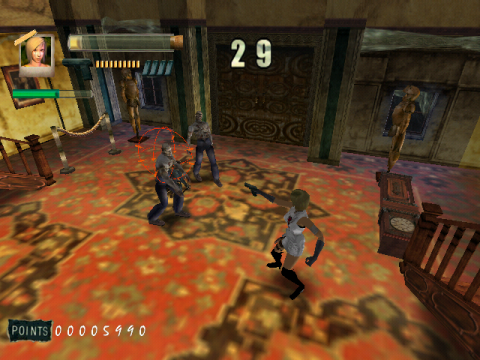 Released initially for the arcades on Sega’s NAOMI hardware, Zombie Revenge received a faithful Dreamcast port. The port adds many things such as a versus mode, VMU-based character raising mode and a Vs Boss mode. Chief among these additions however is Original mode. While arcade mode is single or two-player, Original is strictly single-player and offers Normal Mode, Bare Knuckle Mode and Gun Mode. Normal plays almost identically with Arcade Mode with the addition of unimportant pick-ups. Bare Knuckle Mode removes the use of the gun but enhances melee attack damage. Gun Mode makes hand-to-hand a joke and restricts ammunition to two sets of bullets, but makes each shot do obscene damage. Given the difficulty of the game, most people will only ever see the credits by playing Gun Mode. There are a few extra costumes added to this home port too. 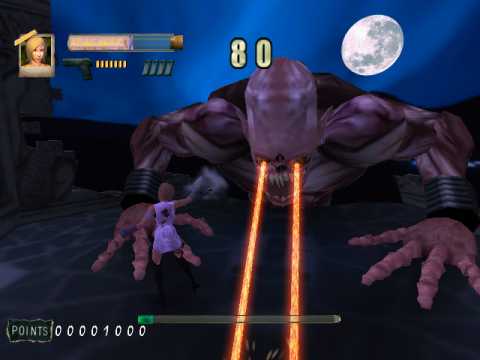 Zombie Revenge is the kind of game you can have a lot of it. There are many secrets to be found which can enhance replayability. There are many neat touches to give the game a lot of charm, such as using a hold attack on the first boss will instead make you yank a pipe out of its body to beat it with.. It shares some DNA with the similarly over-the-top Dynamite Deka series, except several levels more insane. This is especially true in the final areas, where Zed flies around a platform and zaps you with lasers, until he takes enough damage, morphs into a demon based on the Magician from the House of the Dead, and transports you through a psychedelic tunnel of colors. The other tie-ins with House of the Dead are neat if you’re aware of them – one of the later levels takes place in the famous Curien mansion, complete with a remix of the theme music. There’s more bullets on the ground in a single play-through than Doom. But with an almost quarter-muncher degree of difficulty and controls that can cause frustrating deaths, it’s difficult to recommend it as anything other than a curiosity.