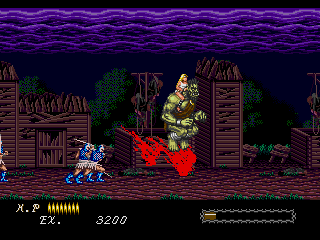 Dahna: Megami Tanjou (or “Dahna: Goddess’ Birth” in the fan translation) tends to draw comparisons to the Rastan and Golden Axe series. Like them, it’s a relatively rare example of a Japanese take on Western fantasy that is completely devoid of anime influence. Gameplay-wise, it’s closer to Rastan, being a side-scroller rather than a beat-em-up, with a similar set of moves and certain shared elements, such as the long-ish levels or the occasional downward slopes that cause your character to accelerate as they descend. The resemblance is no coincidence, as several members of Dahna‘s staff had either worked on the first two Rastan games or would work on the third the following year. For some reason, however, Dahna was published by the short-lived IGS (not to be confused with the Taiwanese arcade company of the same name) rather than Taito, which is probably why it has never been considered a spin-off or spiritual entry in the series. 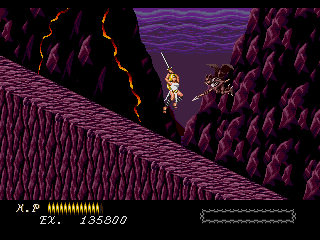 Beyond those similarities, it does have an identity of its own. For one, it’s a much darker game. Dahna is forever traveling beneath dark blue or fire-red skies, when her surroundings are not literally on fire. In the wreckage of the town where her journey begins, dead bodies hang from the remains of their former dwellings as everything burns. And whether she cuts them down or tramples them beneath her ogre’s feet, her enemies bleed. One of the bosses is a four-armed, two-headed knight; as you hit it again and again, his limbs fly off, then his heads. Later he returns, one-armed and headless, to fight you again. The somber beauty of its world is the game’s strongest attribute, and largely sets it apart from the rest of the genre. 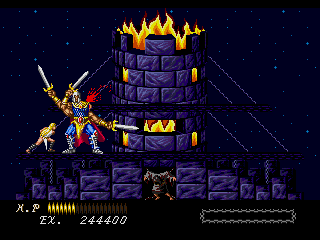 One head down, one more to go.

And then there’s the gameplay.

Dahna is not a bad game, but it’s one that can be hard to like. This is attributable to its designers’ decision to burden it with an odd and clumsy control scheme, forcing the player through a period of adaptation before they can play the game with any degree of comfort. The basic layout is standard enough for a side-scroller: there’s a button for attacking, one for jumping, and one for using magic. There’s an upward stab, and two types of air attacks. Holding up while jumping takes you (much) higher and further, while pressing down crouches. Here it gets a bit unusual, as just a press of the button will leave you in a crouch until you get back up manually, while pressing down again will have you crawling on the ground, a move that has no use at any point in the game. 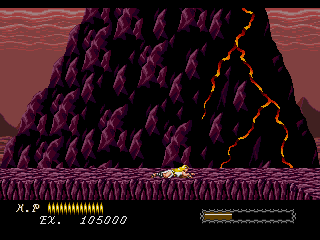 Much like in life, you can crawl, but you don’t really need to.

The attack button works as if on turbo, meaning that you will attack continuously as long as you hold it. This idea was first explored in Rastan‘s underwhelming sequel, Nastar Warrior, however Dahna uses a three-hit combo, with a first slash describing a vertical arc from above her head towards the ground followed by two horizontal strikes aimed at the enemy’s midsection. As that first attack can hit enemies coming at you from above, it’s often preferable to go with single vertical slashes than the full sequence, which requires that you get used to a certain timing rather than just mash the button. Most bizarre, though, is that the same turbo applies to jumps as well; forget to let go of the buttons after a particularly tense leap and you will automatically jump forward again, quite often to your death. There is no changing directions in mid-air; the only control you have is over how far up and ahead you go. There is a certain stiffness to the movements, where every action needs to be calculated and executed separately for maximum efficiency; to succeed in this game, you may have to get rid of old gaming habits and learn to consciously think, however briefly, about each of your moves.

Once past that, however, the game plays rather well. Slaying foes is satisfying, and there’s a nice balance between the fighting and the platforming segments. The level design shows some variety as well. At times you get to ride a green ogre, enemies coming at you in large numbers as you jump on their heads or swat them away; one level turns the game into a vertical shoot-’em-up as you ride a griffon through the night skies, shooting down soldiers from the backs of dragons and slicing the monsters who get past your fireballs. In another stage, you must sneak up on guards and kill them while their back is turned, lest they whistle and summon monsters from the seas below. 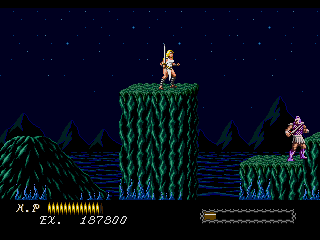 Rather than score, killing enemies gives you experience points, letting you level up at a few points in the game. This is important as it not only raises your max HP considerably, but also fully restores it, which doesn’t happen when you simply reach a stage’s end. There is no possibility of grinding, as enemies do not re-spawn; instead, it works as an incentive not to let too many go along the way.

Also useful are your magic powers. Certain enemies drop items that build up your magic gauge when defeated; the spell you cast depends on the level of said gauge, though using magic only costs the equivalent of one of those items, no matter which spell you use. There exist three spells; the weaker – but still useful – attack spell has Dahna rising in the air as six shadows spring from her body before turning into flames, hitting everything on screen, while the stronger version sends fire raining down on your foes. Perhaps most important is the middle spell, which invokes a sort of blue fog that renders you invulnerable until it dissipates. With 5 credits to finish the game with (each credit amounting to just a single life), the challenge is about par for the course for a 1991 game, which is to say that it should take a few attempts before you can finish it. 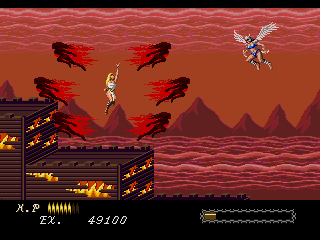 While the sprites are small-ish and a little plain, the backgrounds are very detailed, with plenty of parallax-scrolling and beautiful, gloomy colors. The soundtrack is pretty nice, too, though its author is sadly unknown; it’s only credited to T’s Music, an independent outfit that lent out a number of game composers for contracting work. Most of it has a gothic flavor, at times strongly evoking the soundtracks to outright horror games like Ghouls ‘n Ghost or Splatterhouse, with the occasional pounding drums and epic Golden Axe-style flourish.

Though it was only ever released in Japan and South Korea, the game received a fan translation in 2016, revealing the story to English speakers for the first time. 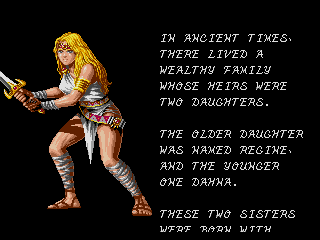 It begins in ancient times with two sisters born with rare magical powers to a wealthy family. As time passes, the elder sister, Regine, attracts the attention of dark forces who covet her growing abilities. On the day of her younger sister’s seventh anniversary, the family’s carriage is ambushed, and Regine is abducted. The sisters’ parents are slaughtered, but Dahna is trapped underneath the carriage and escapes notice.

Following the tragic events, Dahna is adopted by a wizard and raised to become a powerful warrior and magician. Ten years later, while she’s out on an errand, her village is attacked. She gets back just in time to see her mentor taken away by a powerful sorceress, and immediately sets out to rescue him. 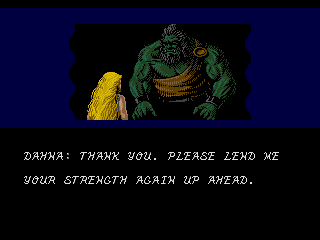 A few cutscenes follow, but they’re short and not especially consequential. It isn’t much of a spoiler to say that the sorceress is exactly who you think she is, and that some sort of ancient evil is involved. While countless games have you escape a crumbling castle at the end, Dahna manages to make this bit more interesting by having you jump from one falling stone to the next while carrying someone in your arms, and the ending, at least, is pretty nice.

To date, Dahna has never been re-released. Publisher IGS only operated for a few years before ceasing activities in the early ’90s, and if anyone knows who owns the rights to their games today, the Internet isn’t telling. While they were quite active on Nintendo’s systems and, to a lesser degree, the PC Engine, this was their only Mega Drive release. Beyond the difficult controls lies a decent game with a rare dark fantasy ambiance, worth the effort for fans of 16-bit side-scrollers. 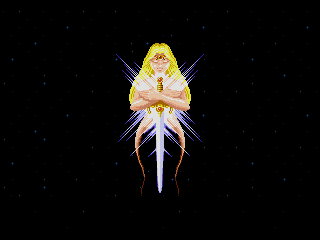 Romhacking.net – For the fan translation patch.

Mobygames – Has the game’s credits, though their entry incorrectly describes this game as a beat-em-up.