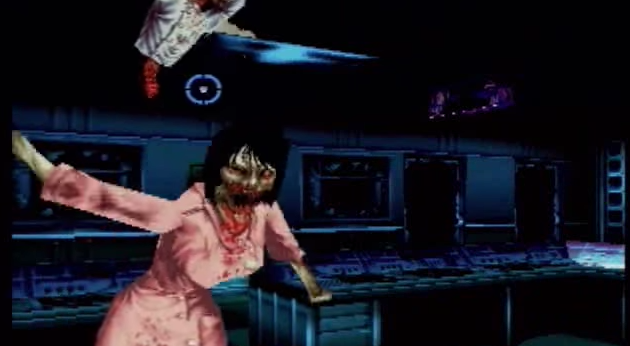 Almost exactly a decade later Beast Busters received a sequel on the short-lived Hyper Neo Geo 64, one of the only seven games released for SNK’s unlucky 3D arcade system. Since the first game, released in 1989, was set in the year 1999, the events of this 1998 game happen in 2009, this time in the suburb of “New Tokyo Port Town” instead of a random United States town. The plot and style have pretty much nothing to do with its predecessor, though (no aliens in sight, for once), and instead are more blatantly based on the two most famous zombie video game franchises of the time: The House of the Dead and Resident Evil. A hospital for treatment of rare pathologies loses all connections with the outside world, and the UN discovers that a strange virus mutated, turning all the doctors, patients and personnel inside into monsters hungry for human flesh. It’s up to two marine commandos to break in and kill everything before the virus can infect the whole city and the world. It’s a B-movie plot typical of the series, and while the game is visibly darker and bloodier, the tone is still gleefully over-the-top. 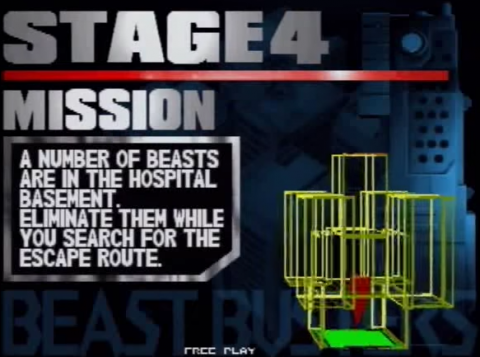 There are some slight differences in gameplay: the UZI have been replaced by shotguns, that need to be manually reloaded, another feature taken from Sega’s series. This time it does actually matter where you shoot the humanoid enemies, since not only headshots instantly defeat them, with geysers of blood erupting from their neck stumps (and they thankfully stay dead), but they also give many more points for those who want to go for the high score. The headshots in fact can also be chained for even more points, but the biggest bonus of all is given by the “Perfect Breaks”, obtained by first shooting off a zombie’s arms and then its head. Big scores are also possible thanks to several medals hidden everywhere that do nothing but raise the player’s points. Other items are the usual medikits, bullet power-ups and three tiers of bombs, the last of which is nothing less than a satellite shooting a huge laser beam: perfect for an exaggerated game such as this one, but far less effective than it should be. 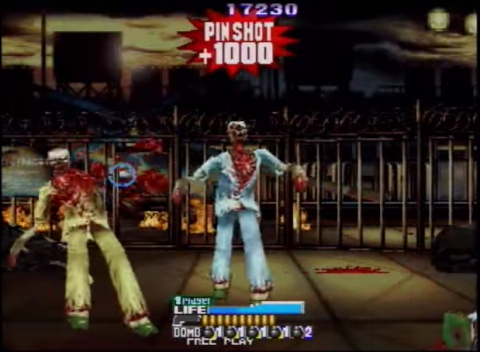 The zombified dogs, fish and bikers with shotguns are more or less the only enemies reminiscent of the first game, although at the end of the first stage the commandos get attacked by what seems a bus sprouting tentacles, no doubt an attempt to recapture the magic of the fleshy living jeep. The enemy gallery features among others giant bugs, zombie nurses, hatchet-throwing undead blatantly taken from Sega’s other zombie-shooting franchise, very agile zombies that are only torsoes with dangling spines and goofy bipedal eyeless things with huge mouths. Much like the first game, the fifth and last level only features the boss fight (thankfully without boss rush) against some kind of unexplained, meteor-throwing gigantic monster that just appears from under the hospital and floats in the sky for the final confrontation. 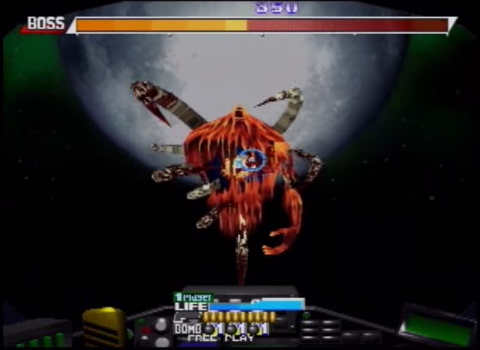 Second Nightmare is the typical arcade lightgun game, in that it is short, intense and never pretends to be anything more than a shooting gallery, but is still enjoyable in doing so. Unfortunately for SNK, the obscurity of the system, of the brand name and House of the Dead‘s enduring popularity meant that the few arcade goers that experienced it only saw it as a poor imitation (not without reason, mind you) and soon it became forgotten. Currently the Hyper Neo Geo 64 is still not emulated, and probably will never be, so unless you’re a collector of cabinets playing the game is impossible now.