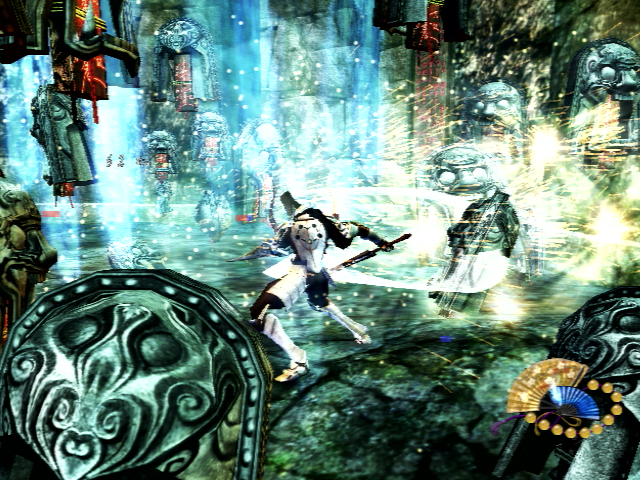 Much like the introduction to the first Otogi, the player sees a scrolling overview of the story so far. It speaks of the story events that came to pass, and how Raikoh restored hope to the world of men. It’s revealed that in the aftermath, everyone was so blinded by the purging of the demons and the resurgence of hope that they didn’t see the evil that still remained.

A cutscene begins, and a mysterious woman in a white robe is seen fleeing a gigantic, nine tailed fox. You may be thinking it’s the incredibly famous mythological Nine Tailed Fox that many Westerners exposed to even a cursory glance of Japanese media might be aware of, and you’d be right. The Kyūbi-no-kitsune isn’t just part of Japanese mythology, it’s part of Chinese and Korean mythology as well. A small mystery is set up within this scene, and the mystery grows as soon the player gains control of this mysterious woman herself, inside a cold and rocky tunnel, after the Fox cries out her name in anger – Seimei. 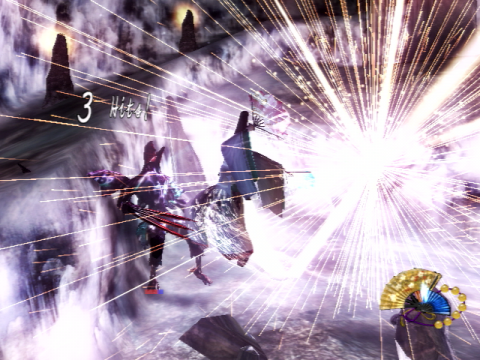 Aren’t fans supposed to be made of paper?

Aren’t fans supposed to be made of paper?

This introduction serves two purposes. First, that Raikoh is not the only playable character. By forcing the player to begin the game as someone other than Raikoh, and one with a completely different style of fighting at that at the very beginning, it builds up anticipation of the time when the player finally gets to play as Raikoh. On top of this, it happens to be a very fast and nimble character, giving the player a taste of what playing an even more mobile and magic-oriented character is like. Second, it displays that there are things about Otogi 2 that the player likely doesn’t know yet, and shatters expectations.

When the mysterious Seimei arrives at a cherry blossom tree at the bottom of the tunnel (the symbolism of this tree is profound in Japanese mythology, a metaphor for life’s fleeting nature). A player with knowledge and having played the first Otogi will recognize Soul Shrine, Raikoh’s sword, immediately.

Suddenly, behind this woman appear four mysterious beings, revealed as the Four Heavenly Kings mentioned in the first part of this article regarding the Minamoto no Yorimitsu mythos. Suetake, Sadamitsu, Kintoki and Tsuna are all referred to by name, and form around the tree. Through ritualistic suicide, they offer their blood in the ceremony to resurrect Raikoh, and he appears, Seimei’s motives now clear. Much like the Princess of the first Otogi, she has summoned Raikoh as her warrior, and immediately asks Raikoh to demonstrate his legendary strength, and the player is given control of Raikoh for the first time. 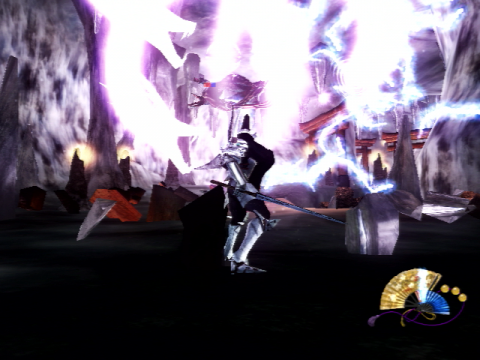 Raikoh still has his Dragon magic.

Three things are immediately clear. Raikoh looks quite different. Having traded in his bronze, metallic armor for a pale white and black set, he looks more ethereal and powerful than ever, and this new look suits him well as an extremely powerful undead warrior. Second, the minute the player locks on to an enemy and dashes towards them, another change becomes apparent. Not only does a dash go towards the direction intended, but even changes elevation if a flying enemy is above Raikoh, allowing him to dash upwards instead of a strict horizontal path, and even varies in distance depending on how far away certain enemies are from him if locked on, a welcome change. Lastly, the spartan gauge on the lower right of Otogi, which possessed merely a partial circle measuring magic power, and orbs measuring health, has been replaced with something far more aesthetically pleasing.

Now, through a large yellow fan representing the amount of damage the player has taken in the context of a single orb of health, a smaller blue fan that burns away with the decrease of magic power, and a string with beads that each represent an orb of health like in the first Otogi.

Upon closer inspection, after the player’s initial realizations, one sees that Raikoh’s dash now possesses a black and purple after-effect, the particle effects and various graphical intricacies are higher quality and in greater quantities than the first game, and the art direction has become far more unified and consistent with the revisions of the menu, graphical interface, and level design. 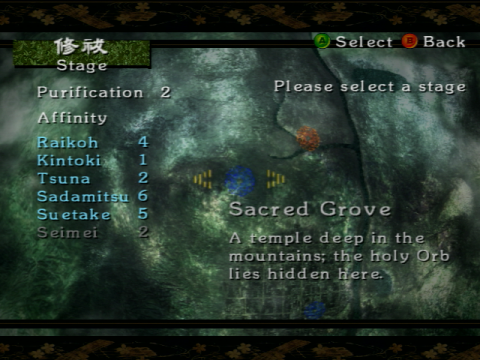 After completing the level, the player is given a message that he has leveled up, a reminder to save, and that they’ve just unlocked a stage in Havoc Mode. What is Havoc Mode? Well, this discovery is made around the same time that the player goes to the stage selection screen for the first time. Gone is the barebones “level select” menu. Now, a bird’s eye view of the world of Otogi is visible.

As the player uses the d-pad to shuffle through locations, they realize that there is another location far off to the right; this is the Forest of Havoc. This is a collection of bonus stages, in which players can do everything from time trials, to skill-based challenges, and even solve puzzles. These are all obtained, much like the weapons of Otogi, through completing a stage in a certain manner or simply playing through it properly in story mode. 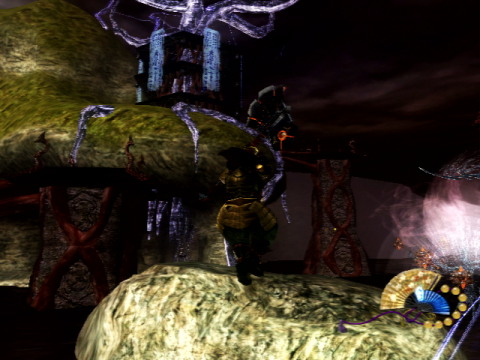 The heaviest man to achieve flight.

Next to each of the world map’s stages are also a series of statistics. We see the ‘purification’ of a stage represented, and the characters brought up in the game’s introduction have ‘affinity’ with the stage in question. This reveals to the player not only that Raikoh and Seimei are playable, but all four of the Generals that serve Seimei and Raikoh are playable as well – they are somewhere between alive and dead, like Raikoh.

Certain characters are well suited for certain stages. This is plainly obvious when the first stage is selected, and the choice between Raikoh and the four generals is given, but Seimei herself is not selectable, and is also many levels above Raikoh and the generals. This yet again shows the player that not every character is playable all the time when it comes to story progression. 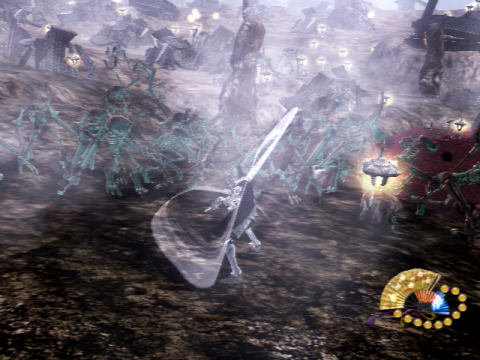 Skeletons. It just had to be skeletons. Everywhere.

Once players experiment, they realize the benefits of each character and that the House system remains. Sadamitsu of the House of Genbu, for example, uses a scythe does a huge amount of physical damage and is very agile; however, she has very little health and nearly no magic ability. Tsuna, from the house of Byakko, is based around physical power and defense using a sword, has a medium amount of health, and has a small amount of magic. Suetake of the House of Sōryū, on the other hand, has very low mobility but fantastic affinity for being a magic caster, and uses a wheel that possesses small bits that magically fly at enemies. He also hovers over water, as the lower half of his body is that of a magical tree. 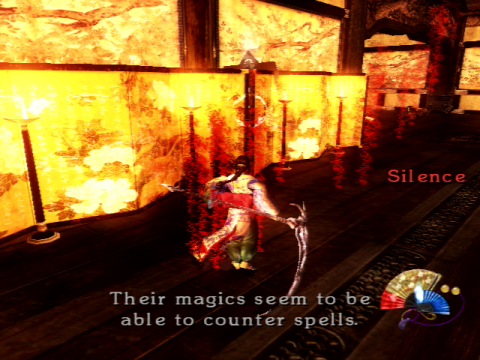 She says this as I’m silenced.

Kintoki, who hails from the House of Suzaku, has extremely high defense and HP. His dash is very small, and he can’t jump very high, but he deals a lot of damage and the Uppercut move from Otogi reappears in Otogi 2, meaning that it’s possible to beat some stages with very high altitude objectives by using the uppercut move, if one wished to play as Kintoki.

Finally, there is Seimei, who actually happens to be from the House of the Void. She’s a really powerful spellcaster, higher even than Suetake, and is extremely fast. All of these characters can use Level 1 and Level 2 of each obtainable magic spell in the game, but cannot use the third level spells – however, her spell, Cosmos, is unusable by any other character and is also magic from the House of the Void. You also cannot take it away from her, either. Each character has alternative weapons and special costumes, all obtainable by completing certain objectives.

The story has a few twists and turns, and some unexpected events take place. The Nine-tailed Fox’s motivation for consuming the world in darkness, as well as Seimei’s role, are all part of a story that feels as if the player is progressing through the events of a legend. Characters must be saved, and Raikoh is put through several trials along with the others. One particular level, where one must stop the ghouls from reaching a destination via flying ships, is the best looking level in the entire series. The motto of this game is ‘more,’ and Raikoh is given the chance to cut down a sizably larger crowd of demons, sometimes all at once. 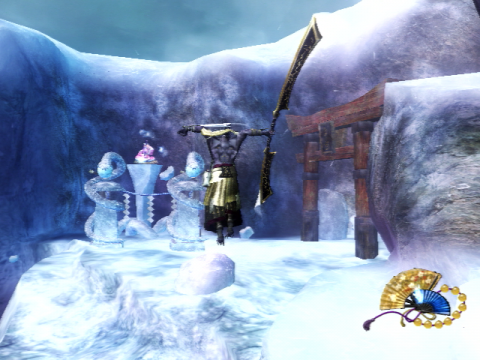 There are a few issues, but they are even smaller than the first game’s problems. First of all, some of the stages are a little too short. Second of all, for those who are obsessive about details, each character levels up as they finish a stage. However, this does not distribute experience to the rest of the group, so if one wants to level up their character, they must play through stages to do it. Since the game is fun enough that this isn’t much of a point against it, though.

If Otogi simply taxed the hardware of the original Xbox a little, this goes a bit further. Through the wizardry of packing so much graphical prowess into one game, Otogi 2 taxes the system harder, and when a series of explosions goes off, the framerate dips. However, when this occurs, I’m sometimes reminded of the intentional slowdown arcade games put into end-of-level explosions to increase dramatic effect. The way this occurs when Raikoh or another character destroys demons is strangely satisfying.

This also means that the loading times are noticeably longer, and one must wait a little while to begin a level, or save their file. Again, these are minor issues. Essentially, most of the small issues with the first game are gone. 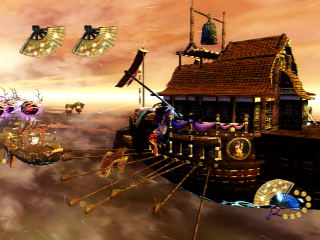 Both the pinnacle and swan song of the Otogi series, Otogi 2: Immortal Warriors is one of the best examples of a proper sequel to a great game. Not only did it expand upon everything people loved about the first one, but also allowed variation on styles of play and playable characters through its expanded cast, removal of the more annoying issues from the previous game, fixing combat problems and the rough edges of camera control, and even had multiple endings. It looked better, played more smoothly, and although the number of stages was smaller by one, Otogi 2 adds a set of ‘bonus stages’ outside of this and doesn’t recycle stages in the main story.

The 2nd Play feature, through these changes, is even more fun, and through obtaining the Moonlight Sword and the lifting of magic restrictions, the player can cause serious chaos. Raikoh is more powerful, and his new appearance suits him far more. The final fight, the subsequent objective, and final scene of the ‘true ending’ of Otogi 2 is one of the most charming, conclusive and poignant endings ever seen in a video game.

Otogi 2 deserves every bit of critical acclaim it received, and among the pantheon of mythology-based video game series, the Otogi games compete with the very best.