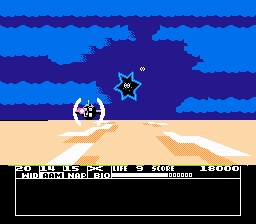 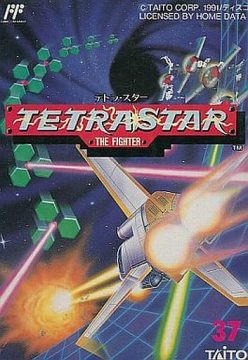 Tetra Star is a 3D shooter, developed by Home Data / Disco and published by Taito, but it seems to have been made by the same staff as Cosmic Epsilon, since it plays a lot like it. It no longer supports 3D, though, and the pacing is faster. There are a handful of supplementary weapons with limited ammo, unlocked over the course of the game, including the Wide Blaster bombs, Homing missiles, Napalm bombs, and the chargeable Bio cannon. It all should seem familiar, but the main difference lies with its storytelling.In the future year 2089, Earth makes contact with the Baal Empire and sets up a warp gate between the two home planets as a sign of peace. Things seem to be going well until the Empire suddenly launches an attack on New York City. As the pilot of the experimental Tetra Star fighter, you lead a small squadron through the warp gate to strike back against the bad guys. 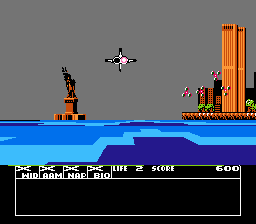 The missions go beyond just shooting and dodging. In the first stage, New York City, the Statue of Liberty is destroyed, and it’s up to you to prevent the aliens from wrecking the rest of the city. There’s also a nuclear reactor stuck in the north end of Manhattan…if it gets destroyed, then it’s an immediate Game Over. It is a little rough seeing Manhattan get destroyed in the opening level, including the Twin Towers if you’re not careful, but they’re reconstructed for the ending, so it’s all okay. In the second stage, it’s imperative that you rescue the captured Omega navigator (a robot dog from the Baal empire), or else your ship won’t make it through the warp gate at the end and you’ll die. In some levels, your performance will help determine how many fighters in your squadron survive; this doesn’t seem to affect much other than the score, but it’s a nice touch.

Throughout the game, Omega will give helpful hints, plus there are cinemas that expand on the story. There are a few branching points, too. You need to defeat the fourth boss within a certain amount of time (or else he’ll escape), and your actions later on will determine whether Omega lives to see the finale. (If you fail, you’re boarded by invaders and he jumps in front of a bullet meant for you. His body is then put in a coffin and ejected into space; it’s quite touching.) 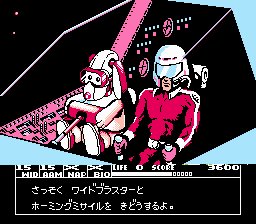 As with Cosmic Epsilon, on a technical level, it’s extremely impressive. The soundtrack consists almost entirely of classical music, weaving through a series of satellites when set to the tune of Khachaturian’s “Sabre Dance” is appropriately tense. The major issue is the same as other similar 8-bit games, including its predecessor – it’s extremely hard to tell when projectiles are actually going to hit you, and you probably won’t know it until it’s too late. Still absolutely worth a shot for fans of this type of game.