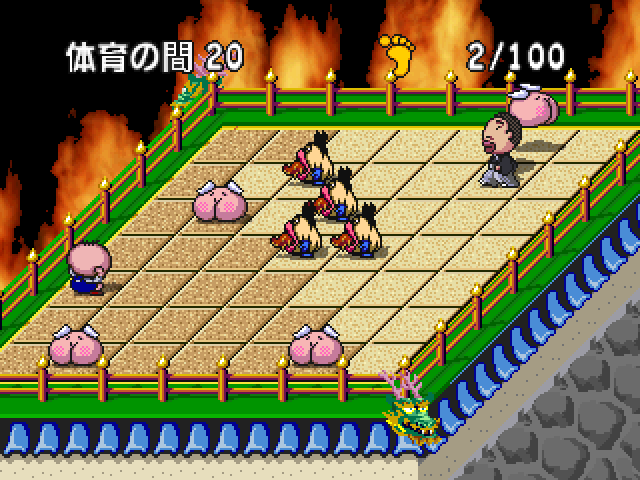 When you were young, you may have been afraid of monsters. You maybe thought that there was one in your closet, or one under your bed. You maybe pictured it as having razor-sharp teeth and plenty of arms/legs/tentacles. But what about monsters with enormous snotty noses? What about the yellow one with the really smelly armpits, or the one with the oversized, dripping tongue? And let’s not forget the most fearsome of those visions: the flying posterior.

To understand this game, you need to know what does “engacho” mean: Imagine two Japanese children walking down the street. The first one of them steps into something disgusting (I’ll let your mind fill the blanks here). The second one exclaims: “engacho!”. The first one makes a circle by connecting his two thumbs and two index fingers together, which the other child breaks with a light chop of the hand. That little ritual is basically intended to break the spell and wash off the grossness, like a “cooties shot”. “Engacho”, therefore, designates anything foul, especially for children.

Apart from this unusual setting, Engacho! is a rather classic puzzle game. It consists of more than 300 stages where your only goal is to reach the exit without colliding with monsters or going over the step limit. You move on a grid, shaped differently for each stage, and so do the monsters. You can move one square at a time in any direction (except where it would put you outside the board), and then all the monsters move accordingly.

The monsters come in four different flavors, as seen on the game’s cover, and each has a specific movement pattern; the ‘tongue’ one will always move in the same direction as you, and the winged butt always in the direction opposite yours. The snotty one will always move 90 degrees to the right of your last movement: if you headed north, they will go east, if you went south they will go west, etc. The one with the smelly armpits will do just the opposite and take the direction 90 degrees to the left of yours. Finally there is a bag, completing the grotesque family, but obviously it does not move. This one appears when two monsters collide head on; if a monster collides with another one from the side, it will bump it to the next square, which can result in its destruction if that is outside of the board, but can also make it land on your own tile. Should another monster end up on the bag’s square, two monsters – often different from the two that were actually “bagged”– will spawn out of it. There is also another puzzle element: when you step far enough from one side of the board, some squares there will become dark, and any monsters present or landing on these will go to sleep and won’t move for as long as they remain in the dark.

If you ever end up on the same square as a monster, you are treated to a weird little animation of the monster covering you in snot/saliva or knocking you out by its sheer stench. Colliding with the derrière will trigger what is probably the most disgusting piece of animation ever seen anywhere, especially for a certain little detail added in the PlayStation version which I dare not to speak about here. Getting bagged yourself is also possible, although very rare. Each of these encounters (or overstepping the limit, or getting stuck in a corner) will force you to restart the current board. All of these goofy/disgusting animations and graphics were made by UrumaDelvi, a pair of Japanese husband and wife artists, in their typical style.

In the game, you play as Sunzuki, a young boy who is apparently afraid of everything. After he comes back home from school crying, his father decides to do the only thing there is to do: throw him in a dark pit so that he can face his fears. In this particular situation, those fears are embodied by the “Oops Five”, a group of five harmless –if disgusting– monsters. From there on, Sunzuki has to go through five different “worlds”, each containing 20 stages where the goal is always to reach the blue square without getting ‘engachoed’. The 20th stage of each world is different in that it is a fight against your own dad. You are both on the same grid and move in turn; the goal here is to send a monster at your opponent. After this, you gain access to a further hundred “special” stages where the goal is still the same, but you are given just the right amount of steps necessary to complete each stage. Then there are a hundred more which consist exclusively of battles against the AI, and finally a few more where you can play against a human opponent. In these the goal is to either send a monster on the opponent’s square, or reach the exit first if there is one.

The difficulty of the stages is rather uneven; you may breeze through a long series of boards without any trouble and then get stuck on the next one for days, which is even more frustrating due to the fact that you cannot skip any stage and have to complete them all in order. The fights against the AI are, on the other hand, quite well balanced, and it is genuinely harder to beat your dad on the fifth world than it is on the first, thanks to a better AI and a careful initial placement of monsters. The “special” stages are especially tough because there is only one way to beat them and you are allowed just enough steps to do it.

Engacho! was released – only in Japan – in 1999 on both the Sony PlayStation and Bandai WonderSwan. The two versions play the same and the stages are similar, but the WonderSwan’s version has most menus in Japanese whereas the PlayStation ones are in English. This does not make a massive difference, the only menu items being the usual “retry”, “quit”, etc. Graphically, the main difference is of course that the WonderSwan game is in black and white, but the animations are also slightly different. The PlayStation version has much more elaborate cutscenes, but it also has a minor flaw: some stages are just a little too big to fit entirely on the screen, so you have to move in order to scroll the view sometimes, which can also completely hide one or two monsters. Knowing that you absolutely need to know the monsters’ positions in order to plan what to do, that can be a bit annoying. Thankfully, it is only a few stages throughout. The WonderSwan stages are always displayed entirely on one single screen.

It is impossible to say if Engacho! was a success or not in Japan. There are no online traces of the developer, the mysteriously named “NAC Humanistic Development”, and UrumaDelvi could not be reached for comment. There is also the mystery of why the title music is credited to “KORN”. The end credits have a whole song with lyrics apparently written exclusively for the game, and the in-game tunes themselves are as catchy as can be expected from a puzzle game. 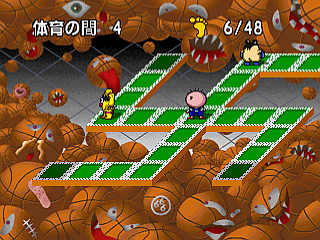 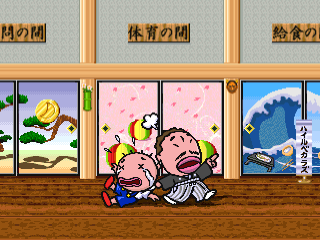 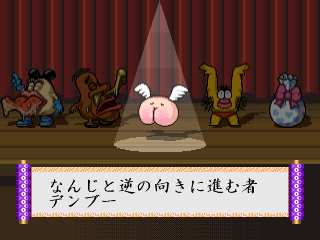 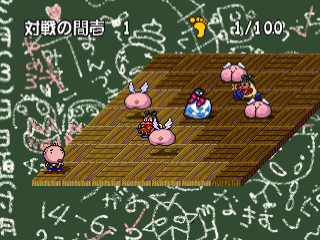 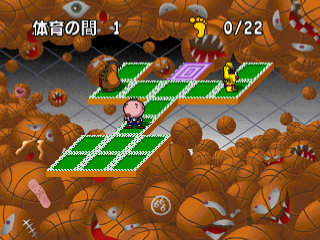