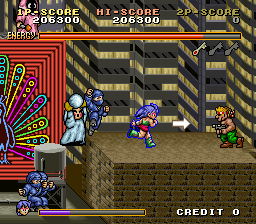 Jaleco is a company that has had its fair share of good games, though a sizable amount of their library would either never leave Japan (Ninja JaJaMaru-kun), be released in the west but have a lot lost in localization (Rushing Beat), or be released in the west to not much fanfare at all. Their arcade line-up does have a few notable titles, namely City Connection, Exerion, and Formation-Z, but as the arcade scene waned in the west, their output on the platform would quickly fade into obscurity. One of these titles is Avenging Spirit, known in Japan as Phantasm, an otherwise standard platformer that stands out from the crowd with its unique core mechanic – the ability to possess enemies and harness their unique abilities. Before Nintendo would expand on this concept a whole twenty-six years later with Super Mario Odyssey and turn into a 3D collect-a-thon, Avenging Spirit would lay the foundation and take a slightly less child-friendly approach. Tokuhiro Takemori was the main planner, and had previously done work on Amagon, The Astyanax, and RoboWarrior. 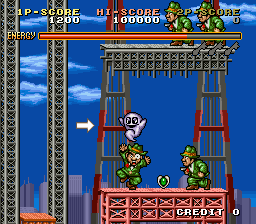 The plot is as follows: our protagonist and his girlfriend, Miss Darling, have just finished up some grocery shopping when suddenly the two of them are ambushed by two trench coat wearing gangsters. Quickly, one of them snatches her, and before he can even do as much as begin to fight them off, the other pulls out a pistol and fires, killing him instantly. The scene cuts to the laboratory of his girlfriend’s father, an experienced spectral scientist, who explains that the two kidnappers were members of an evil secret organization intent on holding her for ransom in exchange for the details on his research. Our protagonist, reduced to nothing but a small wisp, has no choice but to resort to desperate (and not to mention highly invasive) measures in order to bring the criminals down and rescue the person he loves with the time he has left on this earth.

Avenging Spirit has a very simple two-button control scheme with an eight-directional joystick. As a ghost, although you are invincible, you are completely defenseless, and you have a bar of spirit energy that constantly drains and takes a credit when it fully depletes. Pressing either button while above the head of an enemy is where the game’s shining mechanic comes into play – possession. While in a host’s body, A attacks and B jumps. Each host has their own attributes, from agility, max health, and attack power, to things like falling speed and projectile speed (if they have one), providing many different options to get you through the stages. Being in a host is the only way to get pick-ups scattered throughout, which can give back health, restore spirit energy, or just provide points. Taking damage while in a host takes equally from both their health and your spirit energy, and when your host gets killed, you’re ejected from the corpse and forced to quickly go find a new living body to do your bidding. The exception to this is the bosses, where you’re permanently attached to your host and your spirit energy serves as your health, giving you much more room for error. The game also has two-player, but it’s rather lackluster, being alternating instead of co-operative. 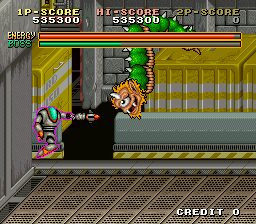 There are roughly twenty-three different hosts you can possess in the game. This mainly comes from that a good amount are palette swaps, but their varying stats make this rather easy to overlook. The two female fighters both run fast and jump high, but they only have melee attacks and very little health. The three dragon enemies are very slow, but they have lots of health and their melee attack is extremely powerful. Some are more mechanically unique than others, like the guru, who can levitate by repeatedly pressing the jump button, or the baseball player, who can reflect projectiles back at enemies for extra damage.

Avenging Spirit is only six stages long, and of course, the main objective is to get to the end of each stage and defeat the boss to advance to the next. A platformer is not much without its occasional secrets, and in Avenging Spirit’s case, the game raises the stakes in that the secrets are directly tied to which ending you get. The cell where Miss is being held captive is in the final stage, and it requires three colored keys to open. None are particularly well hidden as to not drag out a playthrough (heck, the first one is on the main path of the stage it’s in), and the challenge comes more in the additional enemy encounters in order to acquire them. The reward for finding all three is a rather satisfying finale that is quite novel for the time but failing nets you about as much of a downer ending as you can get. 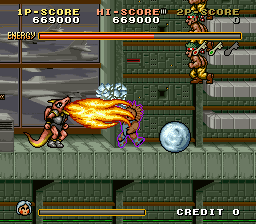 Although Avenging Spirit is a basic platformer, it is still an arcade game, and that means it wants your money by any means possible, whether you like it or not. There is no way to ditch your current host without killing it, but that’s no problem, as it’s quite common that the screen will get flooded with deadly enemies or their even deadlier projectiles, especially if the operator was having a bad day and decided to put the game in one of its two harder settings, increasing the concentration of enemies even further. Getting hit by the wrong attack can both spell instant death for your current host and take a hefty hit to your spirit energy. This makes it nearly impossible to just pick a host you like and go through the whole game with them, but none of them are completely useless. Additionally, none of your potential hosts can attack upward or downward, which feels like a missed opportunity considering the eight-way joystick.

Presentation-wise, the place where Avenging Spirit really shines is in the graphics department due to running on Jaleco’s in-house developed Mega System 1-B hardware. The heavily shaded anime artstyle may not appeal to some, but the effort doesn’t go to waste. The cutscene art is vibrant and detailed, the stages are aesthetically pleasing to look at, and the detail on the various sprites is highly apparent at every moment, which can range from the amusing, like the sprites for when enemies are burned by dragon fire or the vampire enemy flashing his underwear during his attack, to the downright disturbing, like the hopping thugs frothing at the mouth upon death. The music, while okay, is nothing special, partly due to some of the bizarre instrumentation, and the sound effects are rightfully punchy, if not a bit noisy at times.

Although the arcade version largely went unnoticed, the version that people are more commonly familiar with is the Game Boy version, released in the following year. The game plays virtually identically, but it received a global difficulty decrease due to both technical limitations and the nature of being a home port. You have infinite continues, your spirit energy drains much more slowly, there are less enemies in the stages, both enemies and bosses do less damage, and the Select button lets you kill your host instantly, though your spirit energy will still be appropriately reduced. The developers even added a new host, the invisible man, who cannot attack, but is completely invincible and lasts for a limited time. The score system and two-player mode have been completely removed, but there is a new hard mode activated by inputting a secret code on the title screen and changes the enemy placements to be more challenging, not unlike Kirby’s Dream Land.

The Game Boy port was done by an entirely different team, and it certainly shows, given both the amusingly unrepresentative American box art and the substantially different artstyle in-game. Naoyuki Watanabe’s art takes a much more cartoonish, playful approach in the sprites, but the cutscene art is extremely impressive, and even adds animations in contrast to the still images that the arcade version uses, managing to squeeze in about the same amount of detail, despite it being on less powerful hardware. There are even two neat little art pieces that are exclusive to Phantasm depending on what difficulty you finish the game. Takahiro Ogata provided several new music tracks, added in places where the arcade version either was silent or reused previous music. The existing compositions have been punched up significantly, putting a lot more life and heart into the game when combined with the art.

Overall, though the arcade version of Avenging Spirit is still fun, the Game Boy port is far more enjoyable, and you would probably be hard-pressed to find someone who prefers the arcade original to it. The arcade version would eventually receive an iOS port in 2010 by DotEmu, which is just a straight emulation, aside from the bothersome touch controls, and the Game Boy port would later be released in the following year on the 3DS Virtual Console through the eShop. 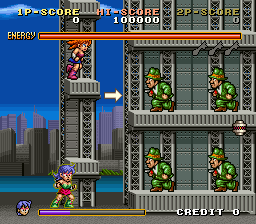 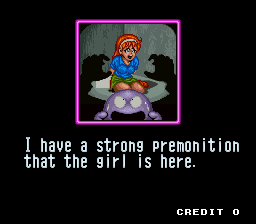