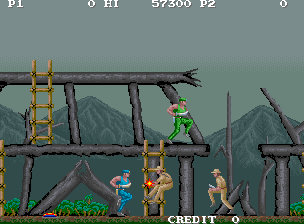 Despite three years of technological advancements in arcades, for better or worse, MIA isn’t too far removed from its spiritual predecessor. This time around, the war you’re fighting is clearly meant to be Vietnam, with your goal once again to free the prisoners of war held at the fifth stage. For the most part, the basic gameplay of running forward, stabbing anybody who comes remotely close to you, and stealing the occasional weapon still remains very much in play. There’s an assortment of new features to be found, however, including a simultaneous co-op mode, as previously seen in the NES version of the previous game. The general difficulty is also more on the overwhelming side, with projectiles and enemies coming at you from more directions than ever. To make up for this, you now respawn where you died, and you’re allowed to continue from a checkpoint for as long as your credits hold out. 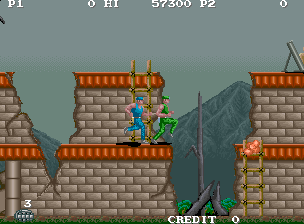 The level design is a little more complex, especially since there’s actually vertical scrolling to be seen. The game makes plenty of use of this, making you climb up guard towers to kill enemies high above you. You’ll also occasionally find underground passages you can fight through, which can give you a brief reprieve from the rain of mortars you’ll occasionally have to deal with. Much like the first game, there’s also no real boss fights as such, with the game instead forcing you to kill a number of enemies holed up in a nearby building. Somewhat hilariously, after all these enemies are dead, this building will then explode for seemingly no reason.

All these changes are usually pretty nice, but it leads to a game that doesn’t ever feel quite as tight as its predecessor. Enemies with projectiles are generally far more common, which means that it’s far easier to end up getting overwhelmed than it was back in Rush N’ Attack. While that game had more of a focus on moving forward quickly, but carefully, and memorizing what laid ahead, here, it feels like success is more about having enough quarters to muddle your way through, along with a little luck. It doesn’t help that the final stage makes you escort your POWs back to a helicopter, with the caveat that enemy attacks will kill them. It’s shockingly easy to have all your POWs die in seconds, leading to an instant and complete end to your game, especially in one that’s encouraged so much credit feeding just before. 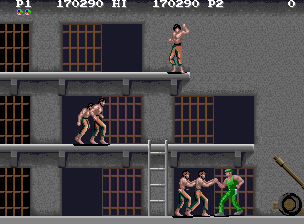 The game’s muddy color pallete isn’t particularly pretty, and tends to particularly blend together during the jungle stages. The music, while not especially amazing, has a little more variety this time around, including a more uptempo action theme that kicks in when you’re approaching the end of a stage.

Overall, MIA doesn’t really feel quite as tightly designed as what came before it, although that may be because it has so many other games of its new era to compete with. It’s still fairly enjoyable, even if it’s very much a quarter muncher, but there’s not much to make it stand out from Konami’s other work of that year.