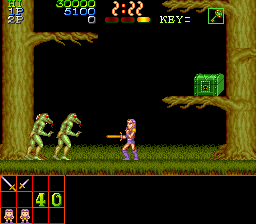 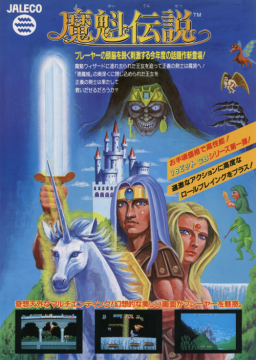 In 1987, British developer Rare developed Wizards & Warriors, a fantasy action game starring a knight who ventured through forests and caves to save his kingdom. It was a success in North America and was then licensed to Jaleco for release in Japan the next year under the name Densetsu no Kishi Elrond. The game requires some changes to make it more suitable for that market, so programming was outsourced to NMK, a company that worked closely with Jaleco on a number of titles. It’s hard to definitively say if this Famicom version was successful, but given that the Wizard & Warriors series saw two more NES games (and one Game Boy spinoff) and none of them were released in Japan, it’s safe to assume it probably wasn’t successful. However, someone in either Jaleco or NMK must’ve found some value in it, because it acted as the inspiration for their 1988 arcade game, Legend of Makai. 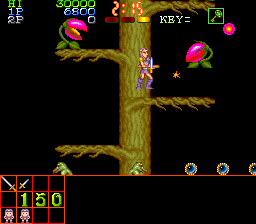 The setup is similar, and is typical for these types of games – a knight has to adventure across the kingdom to defeat an evil sorcerer, and save the kingdom. And from the outset, the similarities to Wizards & Warriors are easy to see. The unnamed hero also holds his sword out in front of him, which can do damage to any enemy that bumbles into it, even without pressing the attack button. Both games feature throwing weapons that act as boomerangs, both games require exploring areas to find colored keys to open treasure chests and doors, and both games have extra equipment to find, ranging from different types of shields and boots. Both games even have a feather item that lets you float after a jump.

Still, Legend of Makai isn’t quite a ripoff, nor can it be called a port of Wizards and Warriors either, because it’s still very much its own thing. This is mostly because it replaces the typically awkward 8-bit British game design with low budget Japanese arcade game design, for better and for worse.

The controls of Legend of Makai are a little tighter, and the levels are completely different. While you still need to explore them to hunt for keys and other required items, they’re a little bit more straightforward – you can always run forward, try to open a door, and then get a short message dictating whatever item you’re supposed to be looking for, where Wizards & Warriors requires a little more exploration. You can take three hits before you die in Legend of Makai, with the usual limited number of lives, where Wizards & Warriors lets you take many more hits. Owing to its arcade implementation, Legend of Makai also has a timer, granting three minutes in most stages to figure everything out, before you’re harassed by an eyeball monster that will probably kill you. 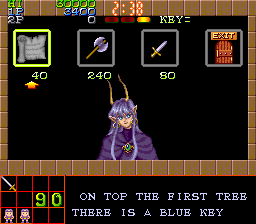 Legend of Makai also takes some pages out of some other arcade/RPG hybrids of the time like Capcom’s Black Tiger, and spreads shops all throughout each stage. This addition made sense, considering Wizards & Warriors had you collecting gems in each stage but they were just used to bribe enemy guards rather than being used to purchase anything. Beyond potions, weapons or other items, you can also buy hints to reveal the location of hidden items. Sometimes the game itself will let you know important clues (like when you’re near a hidden entrance), but otherwise, purchasing these is basically essential without foreknowledge of where certain things are stashed, because otherwise you’d just be wandering around in circles. Incidentally, it also explains one comical element of Wizards & Warriors – the doors in that game were just slightly too small for the main character, and they’re the same here, but it’s revealed that most of the denizens of the kingdoms are dwarves, so their diminutive size is justified.

Like Wonder Boy in Monster Land, there’s also a secondary quest running through most of the levels, here to uncover all of the letters of a magic spell. Right when you meet the final boss, you need to spell it out – If you’ve found all of the letters, then you can fight the final boss and get the good ending. Miss even a single one, and you’ll get the bad ending. It’s definitely one of those games that expects you to play through multiple times and explore everything to truly master, providing you can even bother to make it to the end. 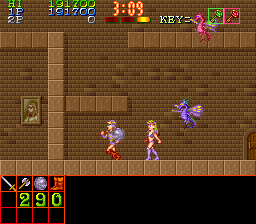 The only truly remarkable thing about Legend of Makai is how incredibly cheap it looks. A few of the stages take place in the forest, and there’s not even any real background, just darkness. The rest of the game is a little more detailed but they’re about as generic as one could get for a fantasy based game. Despite the higher color depth, even the more mediocre NES games of the era had better artistic talent. About the only nice thing that could be set about it is the main character’s distinctive design, which sort of resembles Conan the Barbarian with light blue anime hair. 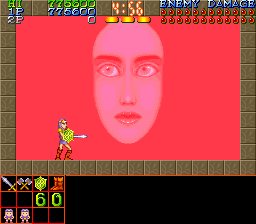 A few interesting, weird moments are spread throughout – there’s room filled with one hundred tiny, creepy faces, some of which fly out and attack as you run past them. And one of the bosses is a gigantic, feminine face for some reason. Another boss is also a dwarf, which pales in comparison in height to your hero, but consisting delivering damage will cause it to grow into a monstrous skeleton being. One of the stages also involves dealing with a slightly rude unicorn. 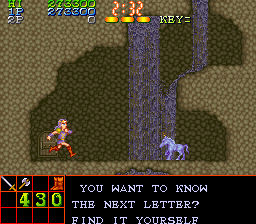 These moments sort of justify Legend of Makai, but not for any reason to make it truly interesting, except for it being one the lesser examples of this branch of arcade-RPG hybrids.

The Japanese version has quite a few extra tricks that were removed from the English version, mostly involving fake items that either just a waste of gold, or can actually strip you of equipment. Some text was left out too, mostly location names or extra clues.

https://tcrf.net/Legend_of_Makai – Details some of the stuff left out of the English version