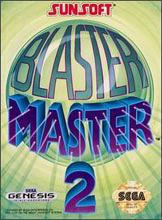 Despite their success in the NES era, the Japanese side of the company drifted away from many of the type of console games that made them popular in North America. That left the American side of the company to commission sequels to their more popular games, focused squarely on the Western market. One of these was Blaster Master 2, released on the Genesis and developed by British outfit Software Creations, of Solstice/Equinox fame. Thanks to them, a true sequel to the original Blaster Master became a reality. Unfortunately, it isn’t a very good one. 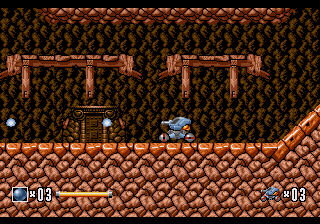 The game takes place a few years after the original game, with a series of lightning bolts having destroyed SOPHIA. This isn’t just some random phenomenon, but rather a series of beings that have stolen them and are attempted to use the tank’s powers to destroy the planet. Jason goes to the drawing board to create a brand new tank, modeled after his old model, and then heads underground to save the world.

Your tank sports a new look and can now fire diagonally upward, otherwise the game plays similarly to the first. In the main parts of stages, you’ll spend a lot more time out of the tank as Jason, and thankfully he’s not quite as useless as he was in Blaster Master‘s overworlds. With Jason, you can fire in multiple directions, and shots from your gun travel farther. Furthermore, Sophia and Jason seem to function more like a single unit, since in Blaster Master 2, they both share the same life meter and gun upgrades. 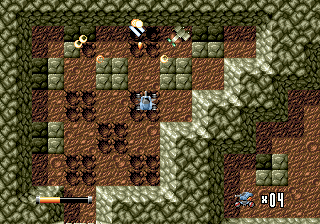 This doesn’t sound too bad on paper, but Blaster Master 2 heavily degrades one of the things the original did spot on: play control. The control feels very stiff, and your tank does this annoying thing where it locks the cannon in the direction you push it, so you keep having to remember to manually bring the tank cannon back down as more enemies come at you on the screen. Also, many of the upgrades you get are pretty lame and poorly implemented.

The non-linearity of the original is nearly absent from Blaster Master 2. Each stage has a few doors for Jason (or Sophia) to enter and one door to the next stage. The stages come off as boring and uninspired. It’s pretty easy to find where to go next, taking away from the exploration aspect of it all. Gone are the overhead dungeons of the original, and in their place are zoomed-in rooms, part of the main side scrolling areas. These aren’t used often, only serving as battlegrounds for the enlarged Jason sprite to do battle with various bosses that cough up items when you kill them. Jason acts the same in these rooms as he does in the main parts of the stages, and he loses his grenade launcher. 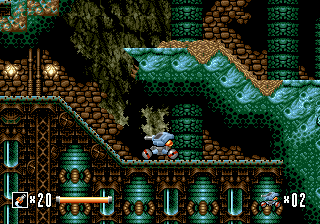 The worst of it, however, are the new overhead tank sections you go to at the end of every stage, that are more similar to the original’s dungeons. The controls in these parts are especially bad. When you move and let go of the directional buttons, the tank keeps sliding in said direction as if it were constantly on ice. It also bounces off walls like a pinball. On top of that, you have to use to the action buttons to adjust you turret and it turns very slowly. So basically, you spend the overhead areas clumsily sliding along and slamming off walls, while frantically trying to move your turret in the direction the group of enemies hammering you with ricocheting lasers and concussion missiles are located.

Graphics are okay for a later Genesis game, but they’re hardly anything to sneeze at. They definitely have the look of an Amiga game, with lots of bright colors, and it contrasts to the dark color palette of the original NES game. Sometimes they can be overly detailed and blending, making it hard too see certain obstacles. The music is a hearty mix of meh and terrible, as many stage themes have annoying bleeps and bloops that sound less like actual music and more like random noises being crapped out of the Genesis’s soundchip. It’s such an incredible disappointment after the high quality of the first game. 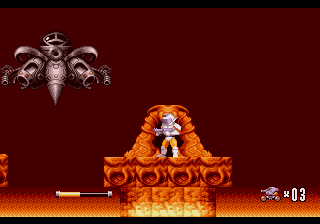 Much of the game’s difficulty comes from not being genuinely challenging, but from the game’s rampant cheapness. Combined with the spotty controls and the lackluster feel of the game, playing Blaster Master 2 will provide a very frustrating experience. Only the hardest of hardcore Blaster Master fans should ever give this game their time. For everyone else, just keep ignoring it like you probably have been doing.