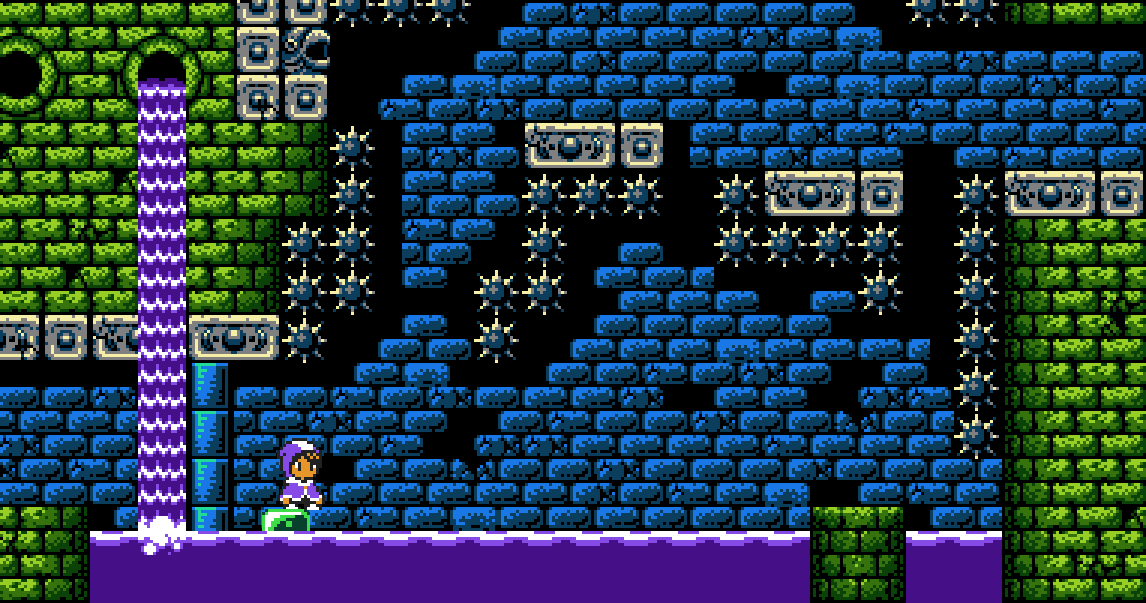 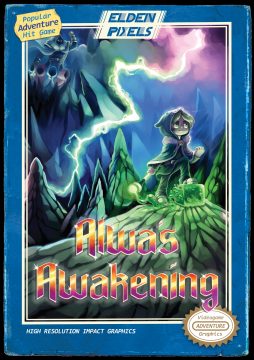 Alwa’s Awakening fashions itself as a lost NES game, a Metroidvania from the era of The Goonies II, Wonder Boy III and…well, Metroid and Castlevania II. It stars a young woman named Zoe, as she explores the kingdom of Alwa in order to find the four jewels necessary to bring peace back to the kingdom.

The main thing that sets Alwa’s Awakening apart from other similar action-adventure-platformer games is Zoe’s special abilities. The first she gets is the ability to create a block (sort of like Solomon’s Key) that can be pushed around to use as a stepping stool, trigger switches, or float along water. She can also create bubbles that float upwards, which you can jump on to reach high spaces, as well small bolts, which can be used to light torches and attack at a distance. The game’s layout is a bit more open-ended than many other Metroidvanias, allowing you to explore a bit before being funneled down the route to the next required power-up. The main areas of the game are also closely linked together, with lots of shortcuts that open up between them. In each area are also keys, used to open the occasional locked door, though these are often optional. The game also uses flip screen scrolling, for that extra classic feel. 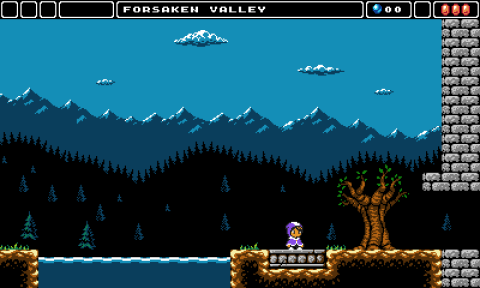 It’s also a little more difficult than these types of games. You can only take three hits, and while there is an item that automatically replenishes your health when you run out, you’ll probably still end up dying a lot, primarily because there are tons of screens with spikes, water, and other instant death traps. The credits point to the masocore pseudo classic Battle Kid as being an inspiration, and you can definitely see that with some of the precarious rooms to maneuver through and tricky jumps to make. That being said, the difficulty isn’t anywhere near the level of most absurdly difficult platformers. There are constant checkpoints too, and the game is kind enough to let you keep any items you’ve found or switches you’ve hit, even after you respawn. 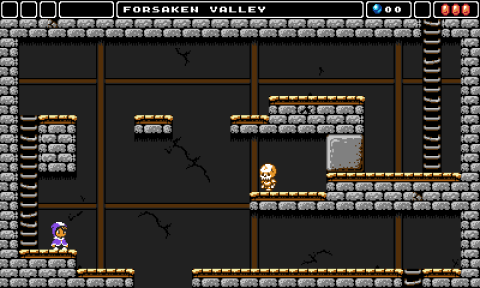 These rooms are where Alwa’s Awakening is at its best, especially when you need to use multiple powers in tandem, or find creative uses for them, like using blocks as shields from projectiles. This is extremely important for boss fights – your main weapon, a staff, is extremely short ranged, and your special abilities are the only way to reach your opponent, who often like to fly far out of reach. You can use your bolt attack, but you can only fire one shot at a time, and it takes several seconds before you can shoot again, much less use any of your other powers. 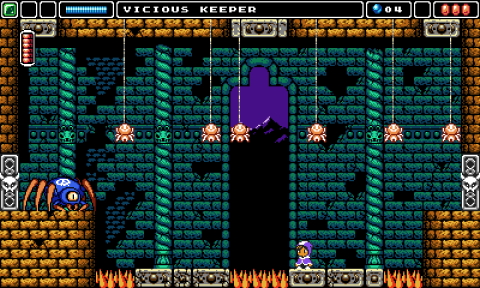 Though its often quite clever, it never quite feels like it reaches its full potential. Most of the game’s 400 (or so) rooms are fairly simple, and due to the weakness of your staff, most of the enemies are the boring types that just trudge back and forth, so combat is typically trivial. Your movement speed is a bit on the slow side, which is handy for making your way through some of the trickier jumps, but makes trudging through previously explored ground a little tedious. Some of the puzzle solving is held back by the fact that you can only spawn single blocks or bubbles at once – if you cast it again, the previous one disappears. And the truly challenging rooms are relatively infrequent – it’s only in some of the later boss battles and the final area that really put your skills to the test. It’s less like there’s a difficulty curve, so much as a bunch of bumps that suddenly spikes near the end. 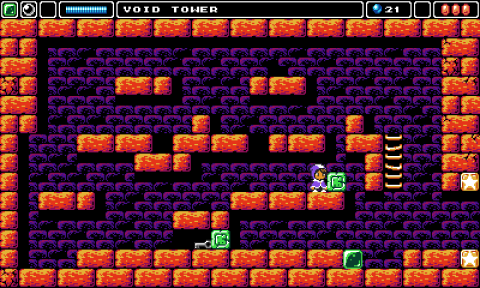 Outside of the relative difficulty, Alwa’s Awakening struggles to set itself apart. The visuals are more consistent than many other indie NES-styled graphics, but they’re still pretty plain, and the areas rarely deviate from assorted brick-themed areas, only changing up the color palette. The music is extremely catchy, having been developed entirely on Famitracker for that extra special faithfulness, but it’s lacking the originality and general “oomph” of other chiptune soundtracks. 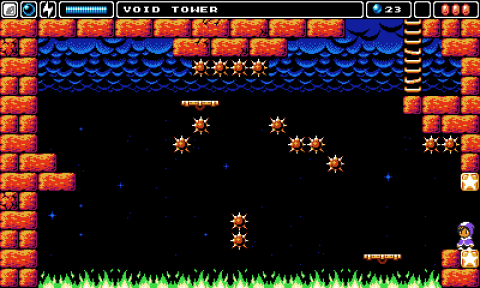 Plus, outside of the necessary magic powers and a couple of other objects (the aforementioned health restorative, along with an item that doubles your attack power), the only real things to hunt for are blue orbs. Depending on how many you have (there are 99 in total), these will preemptively deal some damage to bosses, making their fights a little bit easier. There are also a few clues that, when assembled, will spell out a URL leading to a special website that features assorted supplemental material. These aren’t exactly the most compelling reasons to explore – the game could’ve used more weapons or something else to encourage exploration, and to make it worthwhile to traverse previously explored territory to find new stuff at the late stages of the game. The ending is also both abrupt and esoteric, and there’s only one, as neither your item or map completion percentage affect much of anything outside of achievements, though there is a slightly extended ending if you find all of the tablets. 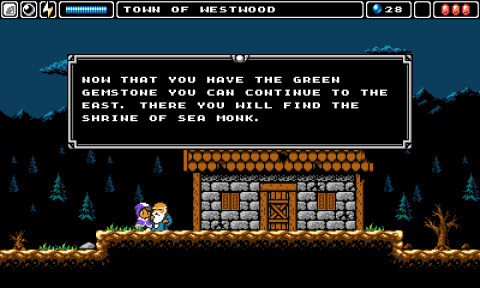 Alwa’s Awakening is quite a likeable game, and as far as it sets out to replicate the experience of classic adventure-platformer games, it certainly succeeds. It’s engaging but also far less obtuse, and the world design is excellent. Plus it’s fairly well tuned for speed runs. There are a number of glitches that the community have found since the game was released, many of which allow you to complete the game much faster, but the developers have been wise enough to acknowledge that this actually helps the longevity of the game. It’s true that Alwa’s Awakening is not as fancy or ambitious as other Metroidvanias, but it’s obvious that this is a smaller scale game though, so taken on that level, there are more than enough challenging and clever moments to make it worth playing through. 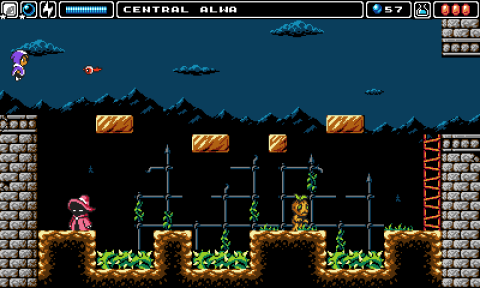