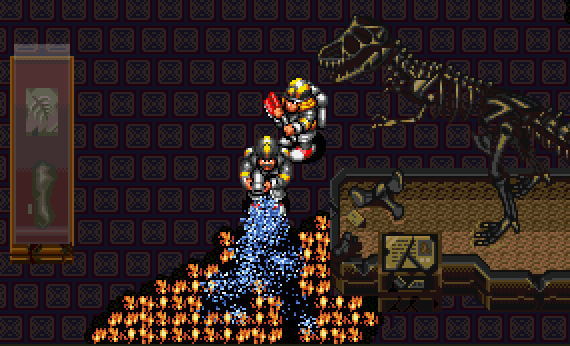 Roughly a year after the first part, Human Entertainment decided to release a sequel for Sony’s 32-bit machine, though unlike its predecessor the game didn’t even see a European release and therefore remained practically unknown. The Firemen 2: Pete & Danny, basically follows the blueprint of the first title. This time around, all machines in an amusement park have gone mad and set the whole place ablaze, so it’s time for the slick old Pete and his axe-wielding fellow Danny, to save the day again. This leads to some interesting adventures through medieval-style castles and face-offs against animatronic dinosaurs. 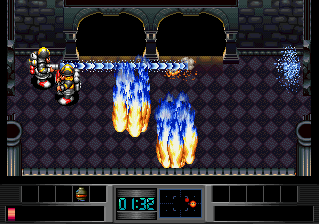 The first time you play, you’ll be happy to find a 2-player option, probably the only thing that had really been missing in the first part. Surprisingly, apart from added voice-acting, this is about the only improvement you’ll see. The game looks almost exactly like the Super Famicom title and it soon becomes apparent that Human just tried to make a quick buck.

The whole game feels rushed and the variety introduced by the new setting is hampered by drab and straightforward level designs. Consequently, the map and sonar from the first game are gone, as you won’t get lost in the linear levels, and there aren’t any hidden people to rescue either. Worse yet, the controls are stiffer and some of the game’s mechanics have been carelessly underutilized. If you haven’t played the first one, you probably won’t even notice that your characters can crawl, as the game doesn’t encourage you enough to take advantage of it (appropriate obstacles or backdrafts are nowhere to be seen). As said, the visuals aren’t remarkable either, in fact the game looks pretty sterile, as many of the subtle touches and nuances (like the atmospheric smoke effects seen in the first game), didn’t make it. The music took a step back too and is pretty forgettable overall. 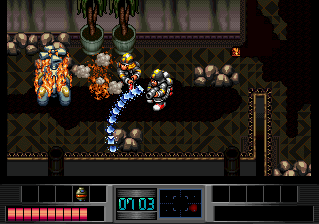 Gone is the fabulous non-stop action and the carefully choreographed ballet of fire and freaked-out service robots. Instead you’re just walking down straight corridors most of the time, with enemies merely being more than a sequence of barriers, only testing your patience instead of your skill. As such, the levels are a cakewalk (if you don’t rush things), but the bosses are kinda making up for it with some cheap, yet uninspired attack patterns.

And if all this wasn’t bad enough, it still gets a hell of a lot worse when you’re playing alone, as your helpful companion degrades into a worthless wimp, who’s always hiding behind your back, that is if he isn’t busy getting stuck into scenery. It’s not exactly a pretty sight, seeing him walking through concrete walls, as he magically returns to you at the beginning of each unskippable cutscene. As it stands, the game shouldn’t have been released in such an unfinished state and it’s sad to see the series end in a train wreck, that’s missing all the excitement and polish that made the first title so utterly enjoyable.