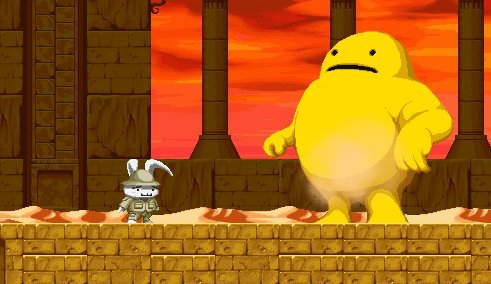 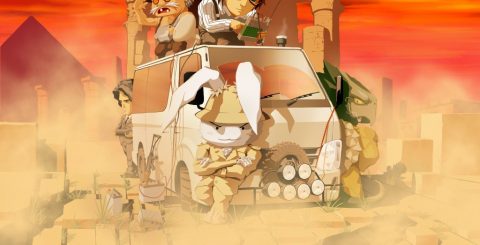 Archaeologists in video games usually have a tough time, and Jonathan Banfield is no exception. While exploring the lost Egyptian oasis of Amshear, not only he found there his arch-rival Andre Betancourt who tried to kill him, but the latter opened the sarcophagus of pharaoh Sehur I, whose curse will cause both to die in a week. Now it’s a race against time to find the seven Holy Grails, that are said to bestow upon their owner immortality, before the other claims them. But many other people (friends and enemies alike) are interested in the lost treasures of Egypt.

Also, Jonathan and Andre are a humanoid rabbit and turtle. 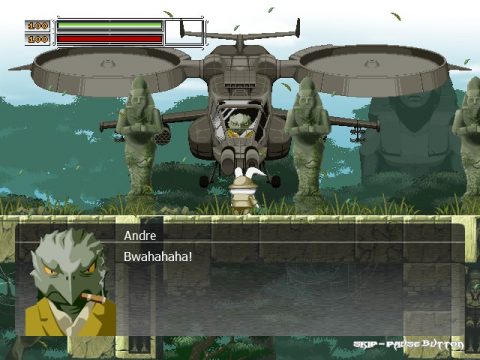 Pharaoh Rebirth is the work of Krobon, a Japanese indie developer active since the late 90s who made several side-scrolling action games. The most well-known one outside Japan is the freeware Return of Egypt, published in 2003 under another alias. Pharaoh Rebirth is actually heavily related to that game, but more on that later.

The game falls in the “Metroidvania” category because Jonathan needs to find treasures that give him useful abilities to better navigate the environments and uncover secret areas. Unlike most examples of the genre, it is not a huge interconnected world, but a series of stages that are unlocked in fixed order but can be revisited as many times as you want after completion. Apparently this is the opposite of the “race against time” idea, but this game was actually conceived as an episodic title for Japanese video site NicoNico’s platform dedicated to indie games, NicoNico Indie Magazine. So far this is one of the only two titles available for it in English. 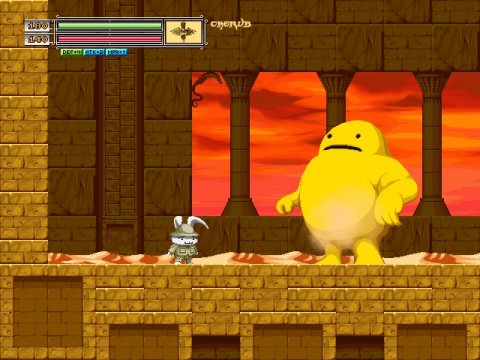 After the prologue stage set in Amshear, the game proper starts with Jonathan sitting in the van of his friend and colleague Jack Davis, an American hacker who acts as mission control throughout the story. The van acts as a hub where one can save the game between stages and select the one you want to revisit. For most of the time Jack only appears as a face on a screen giving helpful hints and engaging in comical banter with Jonathan and Andre, but sometimes he acts directly, like at the beginning of stage 2, where he drives the van to pursue the mysterious train Jonathan wants to board. And it’s not a cutscene, either! 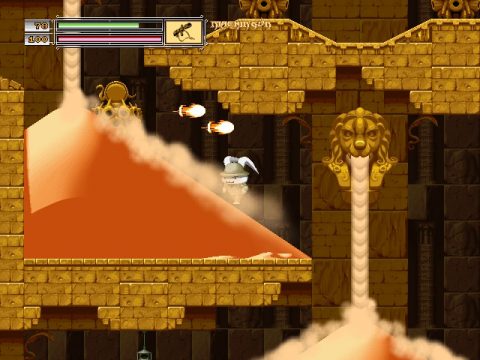 This is just an example of the game’s remarkably cinematic feel: from the prologue where credits appear in the sky while Jonathan inspects the ruins of the lost oasis, to the first boss battle set within minutes of the start (Jonathan on foot against Andre on a military jet), from the pulse-pounding music tracks to the lengthy cutscenes that unfold the plot, involving evil billionaires, immortal ancient heroes, deities and the United States Secretary of Defense (almost never taking itself too seriously, as befitting of a game with a talking rabbit). There are indeed several nods to popular movies, most notably the Indiana Jones series, but also to Krobon’s previous games and to the titles that influenced him, mostly the Castlevania series for enemy patterns and certain plot elements. General influences include indie heavyweights such as La-Mulana and Cave Story.

Everything shows Krobon’s expertise in making 2D action games: the tight controls, bizarre but engaging plot, interesting level layouts, smooth animations and above all the great pixel art, including some beautiful landscapes with multiple parallax scrolling. Bonus points for being a game set in Egypt that features not only sand, pyramids and ruins but several other settings, including a luxury hotel and an abandoned train station. Special mention also for fellow indie dev pepo‘s soundtrack, which is excellent and includes a variety of themes for each stage and boss character, while being mostly far from the stereotypical “Egyptian” game music. 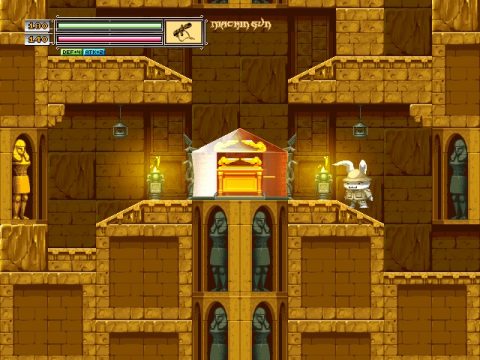 I thought it belonged in a museum?

For a humanoid rabbit, Dr. Banfield is surprisingly aggressive. He can use his ears as blades to hit enemies and has a very effective spinning attack that can be used to rack up aerial combos if attacking continuously while in midair. His ears also turn into different things according to the ability he discovered, with very fluid morphs (inspired by Terminator 2, according to Krobon): rotor blades for the double-jump, a chain for grappling and swinging from certain rings, and so on. He also can find several sub-weapons, that range from mundane (grenades and land mines) to esoteric (magical soot that covers the entire screen and also reveals fake floors and walls) to silly (a gun that shoots bouncing tennis balls).

All these abilities and the abundant save points make the game relatively easy for fans of the genre, but, as Krobon notes, this is a byproduct of the game’s episodic nature: being too difficult could have caused casual gamers to abandon it. The real challenge lies in using these powers to find the huge amount of collectibles scattered everywhere. Some of them are mandatory, others helpful, others useless, and searching for them gives the game a nice amount of replayability. Also hidden in every level are four pieces of the puzzle that when put together at the end turns into a powerful weapon for Jonathan to use.

There are also short sequences to break up the platforming experience, like Jack’s hacking abilities represented as simple minigames, or the rotating pipe puzzle in the Nile temple stage. They don’t break the flow of the game too much, being very short and easy (this is not La-Mulana after all). Not all diversions are welcome, though: see the car sequence that takes up most of stage 5, the Sinai mines. Yes, it’s the dreaded mine cart sequence (though with a jeep in place of the cart) where you have to jump over dozens of pits. It becomes tedious fast and it can’t be skipped, unlike the ghost train sequence in stage 2, when you revisit the area. And it’s immediately followed by a shooting gallery part with tons of flying enemies, which is equally as long and annoying. Then again, the level makes up for it with the epic-sounding music track, and especially with a cool boss fight against the deceptively goofy Medjed, who looks like a Pac-Man ghost with legs but is still a god whose name means “The Smiter”. 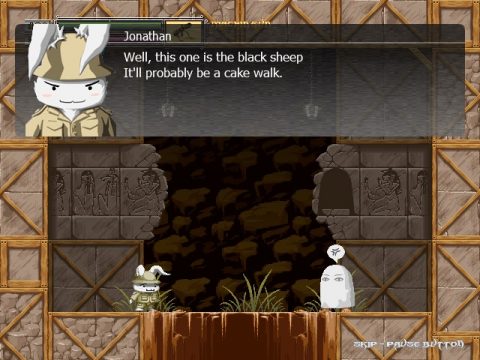 Believe it or not, he’s an actual deity!

The updated release on Steam, Pharaoh Rebirth+ (the source of this article’s screenshots), has several additional contents other than English language translation: difficulty level selection, the usual achievements, a boss rush unlocked after finishing the game, and even a whole new stage that has to be unlocked by finding a certain item in one of the levels. This stage takes place three months after the end of the main story in Las Vegas’ Luxor Hotel, which has been taken over by Anubis. Cynical players could point out that the new stage recycles some assets from the actual Luxor stage and the Cairo hotel stage, but the level layouts are interesting and varied enough, and there’s still enough new content, including a cool new tune. Plus, the idea of an Egyptian deity settling among Vegas’ fake pyramids is hilarious and typical of the game’s zany Japanese humor. This level is also more challenging, so be sure to have found enough stat-raising items and mastered Jonathan’s grappling, gliding and jumping abilities.

The Return of Return Of Egypt

Return Of Egypt was a Metroidvania game heavily based on Castlevania: Symphony of the Night, but with an ancient Egyptian theme. It was made by Krobon in 2002-03 under the moniker “Driven Phantom Soft” and distributed as freeware. The game featured an old guy named Rania Qadesh – usually mistaken for Moses – who braved temples and pyramids defeating monsters and deities, and gaining their abilities to go forth in the game world. Several assets from Return were used in Rebirth, such as music tracks, some enemies and animations, but the connections go well beyond that. Pharaoh Rebirth is actually a distant sequel to the older game, directly influenced by Qadesh’s battle against the evil gods. In fact, not only Qadesh is referenced in-story, he actually has a role in the plot, and his old nemesis re-appears as well, having orchestrated the curses and everything in order to get his revenge on the hero even after centuries. It’s all played very seriously and epically in this case, but Krobon found the right way to balance the seriousness with Pharaoh Rebirth‘s lighter and more comedic attitude. 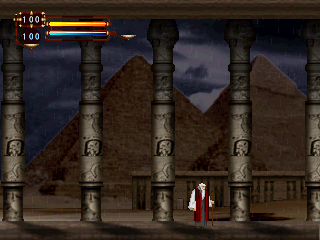 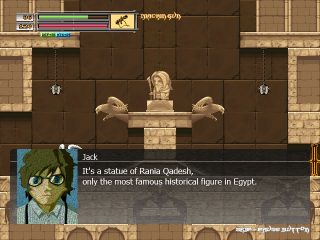 On the left, Return Of Egypt; on the right, a tribute to the ancient hero in Rebirth.