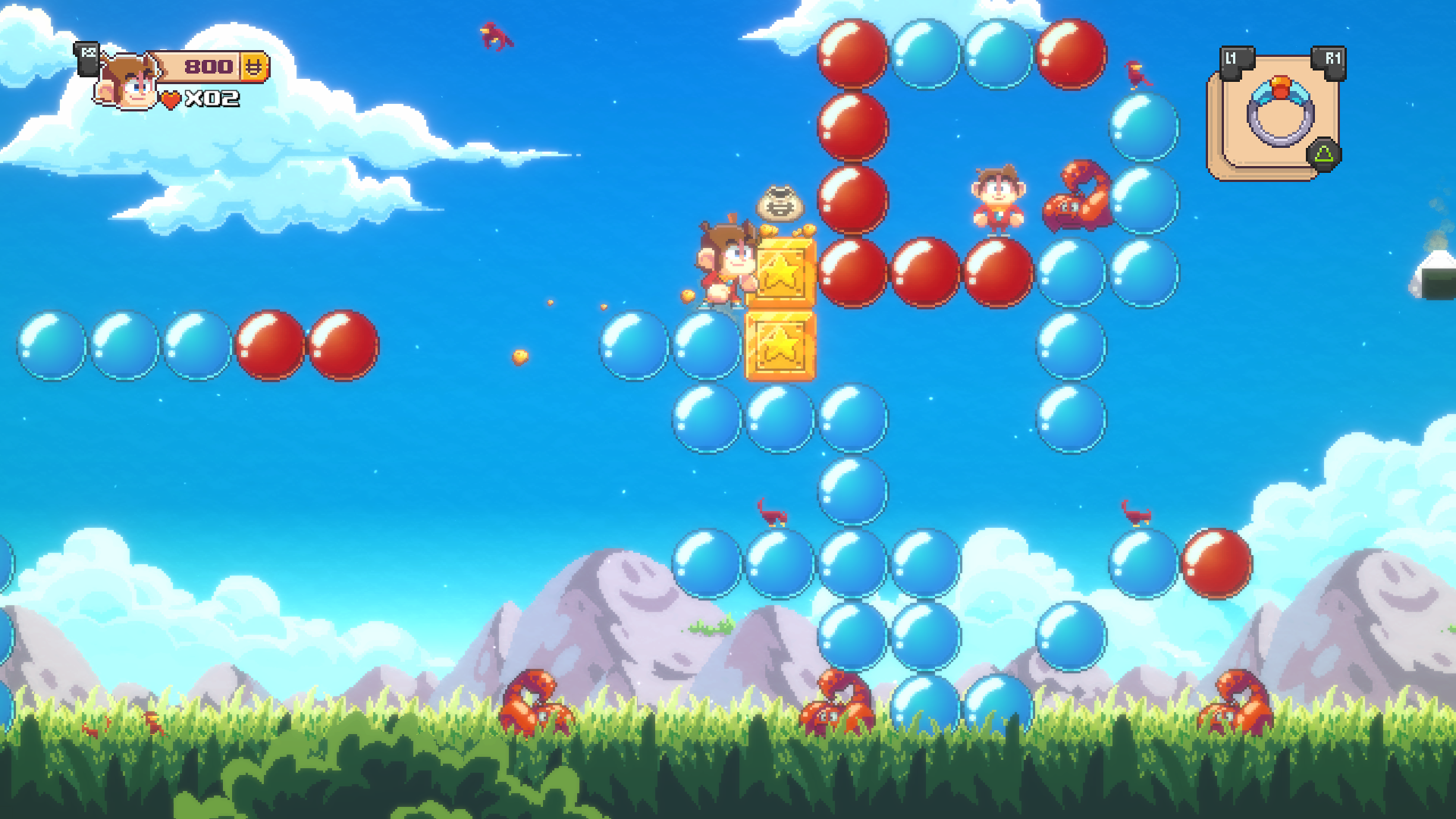 It’s been a long time since Alex Kidd in Shinobi World, the last entry in the series, released for the Master System in 1990. Since then, Alex has lived on through some cheeky cameos (Segagaga), some playable appearances in sports/racing games (Sega Superstars Tennis, Sonic & Sega All-​Stars Racing), and a few ports of the original Alex Kidd in Miracle World, including a slightly enhanced Sega Ages release for the Switch. Finally in 2021, we have Alex Kidd in Miracle World DX, the closest thing to a real new entry in the series, though as the title implies, it’s a remake of the first game. Since Sega in Japan always seemed flummoxed by the character’s popularity, seeing as the character was way more popular in Europe, it was licensed out and developed by Spanish studio Jankenteam. 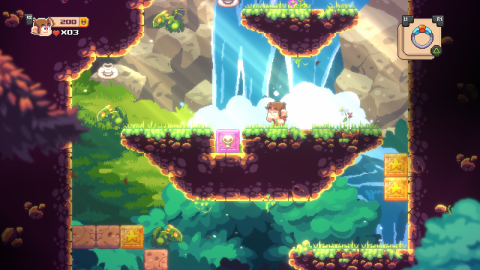 The first and most obvious improvement are the brand new visuals, which look gorgeous. They eschew the “new retro” style popular in indie games for something far more colorful and detailed, while still retaining a classic feel. Alex himself is enthusiastically animated, particularly his new scarf that trails along as he runs and jumps. The new art style isn’t based on any of the original Master System-era artwork, but it’s fun and boisterous, and fits the character. The rocks-paper-scissors matches now have full screen portraits of the characters when they make a move and react appropriately when they win or lose. There’s an option to choose what kind of food Alex chomps on when beating a level – there’s the classic onigiri and hamburger, as well as fish and chips or a Spanish omelet. The only thing is that the designers went overboard with some of the foreground objects, so there are a few cases where they block the player’s view.

The music has not only been rearranged in a pleasant style using acoustic guitar in the main theme, but there’s also a ton of new tracks, a necessity considering the original game only had about four pieces of music played through most of the game. The story has been expanded a bit, with longer bits of dialogue, as well as some encounters with various townspeople that have been turned to stone by the nefarious followers of Janken. 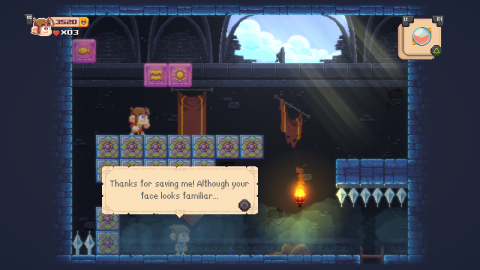 Also new are a handful of added levels spread throughout the game, including a volcano area, a desert stage, a swamp, and an expanded version of Radaxian City, which was barely more than a screen in the original game. There’s also a new vehicle, an airplane, as Alex takes to the skies in a shoot-em-up stage. By far the coolest new stage is the one that precedes the final castle, where you fight troops with various hand signs, basically lesser versions of the game’s bosses, giving you a wider view of Janken’s army.

As with Lizardcube’s remake of Wonder Boy: The Dragon’s Trap, you can also switch between the new graphics and the retro 8-bit style graphics. To accompany this, there are brand new tiles and sprites for the extra areas and levels, plus Master System-style arrangements of the soundtrack. It’s all very cool! However, it does expose some of the technical issues behind the game – namely, the hitboxes seem to be based on the 8-bit sprites but the revised versions don’t quite match up, so collisions don’t feel entirely right. The sound effects for the retro mode don’t seem quite right, either. It should be noted that The Dragon’s Trap remake was based straight off the original SMS game engine, while Miracle World DX is a recreation, so it’s not entirely accurate in the same way. 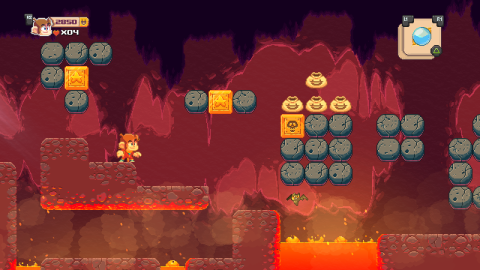 While the aesthetics have been given a huge overhaul, and the added levels are very welcome, otherwise not a whole lot has changed in Miracle World. The controls are very slightly tuned, and enemies that take multiple hits now flash when they take damage, plus most of the boss fights have been redesigned to be a bit more elaborate. But otherwise, the level designs, enemy placements, and physics mostly remain the same. For anyone who hasn’t played Alex Kidd in Miracle World before, they may find themselves surprised at how punishing the game can be, especially Alex’s short attack range, the single hit kills, and extremely tricky platforming challenges. The difficulty level is slightly eased by the fact that you have unlimited continues (and can save progress through the game) and can enable infinite lives if you don’t feel like restarting the level when you get a Game Over.

One thing that hasn’t changed at all is one of Miracle World‘s most contentious elements – the rocks-paper-scissors match. If you’re going in blind, it’s still very much guesswork about whether you’ll win or lose. There are still the Telepathy Balls that show your opponents thoughts, but you lose it upon a Game Over. Alternatively, the patterns are the same every time, so you can either record them when you play, or just look them up on the internet. Still, this was something that could’ve been rethought in some way. 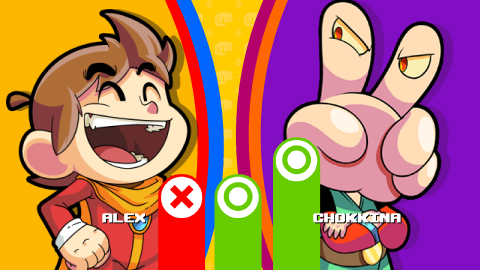 There is one well meaning change that ripples through the entire game. In the Master System game, it was always worth collecting money because it could be used to continue. Since it’s now unlimited (and free, though it depletes your money supply completely), there’s not as much use for it. Even in the final castle, when there weren’t any more shops, it used to be worth grabbing every bit of cash you could, but now there are treasure blocks in tricky areas that simply aren’t worth grabbing, because now there’s no point.

The general philosophy of Miracle World DX is that it modernizes the visuals and music and makes a few additions and changes, but for the most part, it’s still based on a game that came out in 1986. It’s very much made for players who grew up with the Master System game, so those without that nostalgia may come away wondering why the game had any fanbase in the first place. But at the same time, its design quirks are part of the game’s identity – changing up too many things, and it’s not really Miracle World anymore. Based on the ending, it seems like the developers have a proper sequel in mind, but used the Miracle World DX remake as a way to build towards that future. Ultimately, it’s still probably a “fans only” sort of deal, but outside of a few technical quirks, those fans should mostly be pleased. 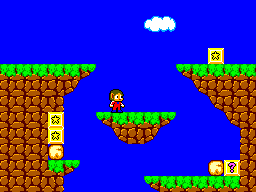 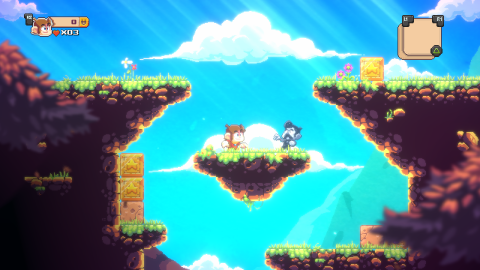