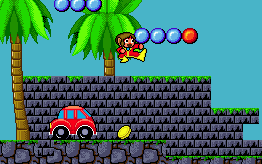 After so many departures, Alex’s first (and only) Genesis outing goes back to its roots, with gameplay similar to Miracle World. The graphics are more colorful, although since this was a launch title for the Genesis it’s still not too impressive. 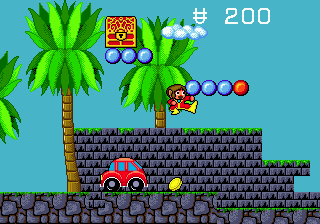 Alex’s father Thor has been found alive on the planet of Paperrock, so Alex attempts to save him from the evil Ashra. There are only 11 levels, compared to the 17 in Miracle World, but most of them are a bit more expansive, allowing you to find alternate routes in the sky, or in hidden underground areas. The types of levels are similar to the original game, although there are now a few Egyptian influenced stages. Most of the items and vehicles are the same, although there is a new pogo stick. 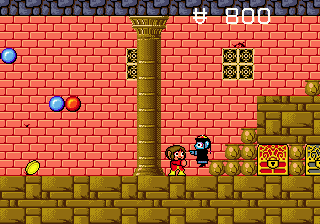 Unlike the original, which required that you use most items as soon as you bought them, you can now access an inventory screen to use them whenever you want. Also, when you hit blocks hovering in midair, it won’t destroy them, but instead send them flying across the screen squashing anything in their path. If the blocks are next to a solid wall, they’ll break like normal.

Most of these changes are for the better, but some aren’t. You can’t just walk into stores and buy things anymore, you need to play rock-paper-scissors with the shopkeepers to get anything, in addition to paying money. Again, you can’t see the other character’s moves unless you have a special item, which proves most annoying when your life depends on it. 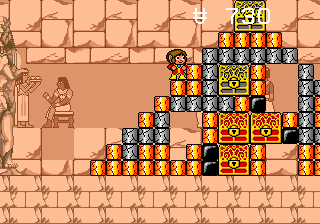 The controls are also even more slippery than they were in Miracle World. Not only are Alex’s punches rather slow, but you can’t punch in midair. Rather, you’ll automatically jump kick after reaching the apex of your jump, and you need to position him so his foot makes contact with the enemy. Trying to hit anything without getting killed is frustrating. It’s a shame, because Enchanted Castle comes up the poorer game compared to Miracle World.

There’s some censorship between regions. At the end of a rock-paper-scissors battle in the English release, a large weight falls on the loser’s head. In the Japanese version, the loser is stripped of their clothes, with, in Alex’s case, a tiny elephant covering his naughty bits. 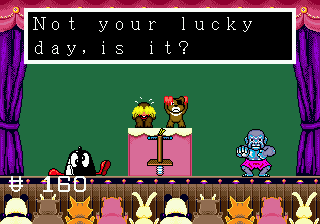 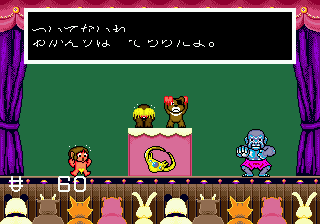