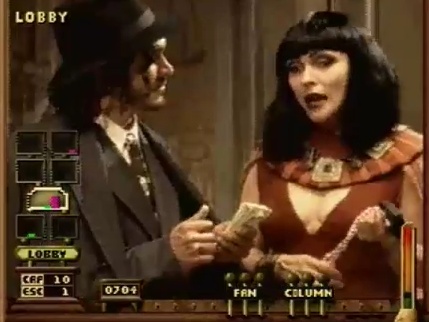 Love it or hate it, Digital Pictures’ infamous Night Trap left its mark on history. Whether for the campy horror theatrics, overblown congressional backlash, or simply written off as one of the main titles to blame for the advent of FMV gaming, it certainly made an impact. So of course Digital Pictures decided to cash in, and give the woefully underused genre of trap-gaming another shot.

Double Switch isn’t much of a sequel in anything but the trap-based gameplay, but the improvements it makes are significant. Where Night Trap forced the player to constantly shift the camera between rooms to find out what was going on, Double Switch‘s developers were kind enough to implement a mini-map of sorts. Whenever someone enters a room of the Edward Arms Hotel, the map immediately notifies the player of their arrival. Green circles indicate a resident, yellow a burglar (expected robbers), and red for intruders (someone who has no earthly business being there). 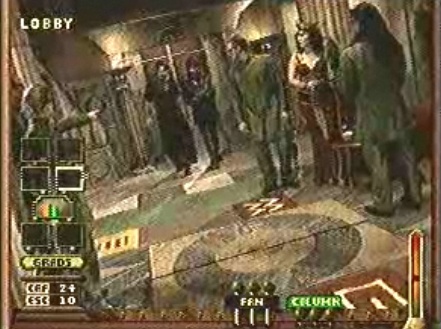 This means there’s no more frantically checking every room at every moment. On the downside, this instead means having to decide which events to focus on in which areas, and Double Switch has no shortage of those. For example, each of the four tenant rooms can have invaders, while story sequences can be going on in the lobby and basement areas simultaneously. Fortunately, the game is a lot more lenient about the trapping requirements. As long as the player doesn’t let the number of escapees get wildly out of control, the game continues. It can just be extremely difficult to decide whether to trap that new intruder or keep watching the co-eds discuss the mystical statue they received in the mail.

Double Switch, much like its predecessor, manages to craft an interesting, if campy, tale. The late Corey Haim “stars” as Eddie, a tenant of the Edward Arms hotel building. Since “the neighborhood really sucks,” Eddie designed an elaborate series of traps and switches to project the tenants from a seemingly endless array of hoodlums and intruders. The player, a pal of Eddie’s, is given control of the traps to find out who’s behind the intrusions, protect the tenants, and free him from the basement where a mysterious someone locked him up.

The entirety of Act 1 focuses on finding the code numbers in each of the four primary tenant rooms: Band, Brutus, Co-Ed, and Alex. The Basement remains inaccessible until Act 2, while the Storage room has to be protected to keep the power from being cut off. The Lobby gets used mostly for visitors and key story events, although people also break in that way pretty often. The trick is that they only appear when their panels are unlocked by intruders at random intervals; and often within seconds of each other. This means hoping you’re following the right intruder first, then quickly switching to the other. As long as all four are gotten and the intruders are kept under control, Eddie escapes the basement, and the story continues.

Act 2 is where things start to get complicated, when a killer shows up, who attacks the tenants by using their traps against them. Act 3 is when everything goes real crazy, and the tenants start fighting back. 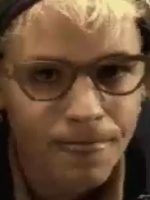 The late actor is best known for starring alongside Corey Feldman in The Lost Boys. Here he plays one wild character, the wiz-kid who designed the traps of the Edward Arms. He later goes absolutely insane, and takes to disguising himself as a mummy to steal the Statue of Isix. 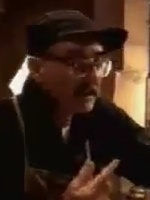 Ermey apparently has a military background, which makes his campy portrayal of the goofball handyman all the more amusing. At first, Eddie directs the player to keep him out of his affairs, but as time goes on, there proves to be more to Lyle than what Eddie would have the player believe: He’s actually Eddie’s father, and has been trying to keep his deranged son under wraps for his own and everyone else’s good. 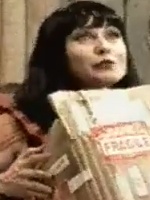 Yes, that Deborah Harry, the lead singer of Blondie herself; now with black hair. The manager of the hotel mostly keeps to the lobby, and seems blissfully content to let absolutely anyone into the hotel, as long as the price is right. She’s in fact Eddie’s mother, and dotes on him far more than Lyle does, and actively helps him run wild in Act 3. 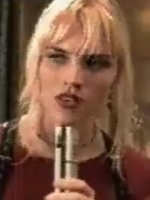 A freelance photographer who lives in one of the rooms. Eddie thinks she likes him. Although he might be delusional, Alex does describe him as “her hero.” 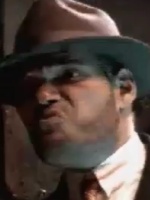 An ex-mobster, recently released from prison. Brutus desperately needs to find the hidden treasure of the Edward Arms to pay off the mob who wants him dead. He’s the reason the mobsters are breaking into the hotel. Keyes has been in assorted mob movies as a background character, notably The Road To Perdition. 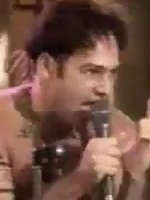 The lead singer of a band that lives and practices out of the upstairs room. Jeff only cares about his band getting a record deal, and hates when Eddie’s traps fry his sound system. He seems to be dating Phoebe. Although Scream only perform one song, “Tunnel Vision” is a far catchier(and better produced) track than Night Trap‘s atrocious theme, even keeping to the game’s Egyptian motif. 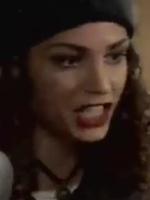 One of the two co-eds who live in the second floor dorm. Phoebe receives a mysterious statue that makes her and her roommate extremely popular with the Society invaders. 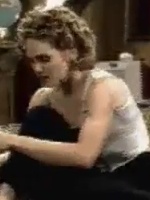 Laura plays up the blissfully ignorant blonde role to a T, even though she works as a nurse and doesn’t seem to be really as dense as she lets on. Even when things fall apart, she rarely seems to care. 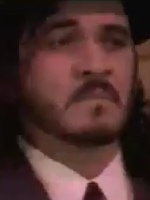 A wacky foursome who show up to get money from Brutus, if not his bullet-ridden corpse if he fails to deliver. Their capture scenes are often the most hilarious. Their leader, introduced as Luigi (Thomas Rosales), works for someone who goes by the name of Mario. According to Brutus, “their days are numbered.” 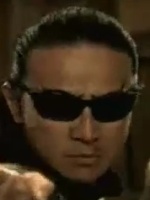 Although these green-clothed cultists cut a more imposing presence than the mobsters, they’re actually even more stupid. They can still prove a major threat in Act 3, as their leader can attack major rooms with a quickness before the player realizes he’s entered it. 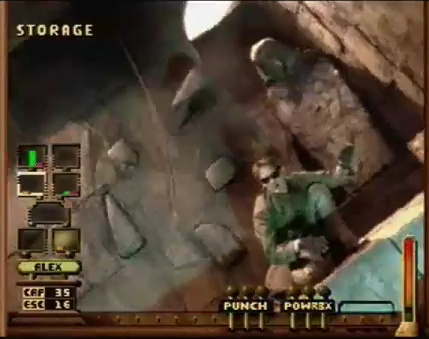 The inclusion of the mini-map is easily the most welcome addition to Double Switch, but not the only one. Some actually make the game harder to make up for the map’s display. Night Trap‘s traps were run from a single button, and often based just on timing; there were no sound cues. The player had to watch the meter for the red light, and hit it the moment the intruder hit a key trigger. In Double Switch, the triggers are often made up of brightly colored panels, and when activated, a loud ring tells the player to trigger it. However, some later traps (often the most crucial ones) require split-second timing, leaving no room for error. If the player fails to catch an intruder who’s trying to cut the power or harm a tenant, it’s instant game over.

Also, each trap has to be “charged.” Two button presses ready the trap for activation, and the third triggers it. Every room has at least two traps, some have three. In the Sega CD version, the traps have to be selected by the d-pad and armed with the A button, then disarmed with the B button. The Saturn version makes managing them lots easier; they’re marked by the A/B/C buttons for arming the traps, and X/Y/Z buttons are used for disarming them. If too many of them are prepared at once, the traps overload, and they’re left briefly inoperable, which can be disastrous at the wrong time. Traps can also be deactivated by using the appropriate button, which isn’t just to prevent overloading; in Act 2 and 3, some enemies use traps against the tenants, which must be deactivated to prevent their usage. 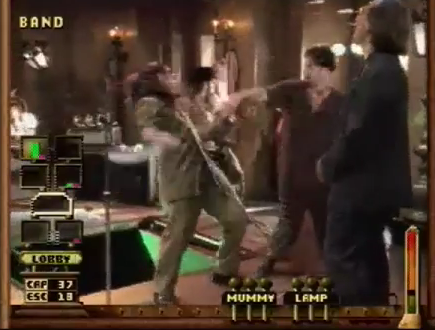 The score for the game was composed by Thomas Dolby. Although it repeats a lot of the scarce pieces throughout the game, the soundtrack maintains a mysterious, catchy Egyptian motif throughout.

The story of Double Switch is far from high theater, but it certainly has its charms. The acting is about as good as it gets for an FMV game, especially from the hilarious screw-ups provided by the intruders, who were obviously having a blast when filming the captured sequences. It even has a few novel twists and turns, not quite as predictable as the ones in Night Trap, but hardly shocking. Still, Double Switch is more than enjoyable enough to stand on its own outside of Night Trap‘s shadow, both as a B-movie and as a game. Attempting to view the multitude of possible endings, story sequences, and even outtakes certainly gives Double Switch a lot of replay value to spare. As always, nothing in this game is going to convince FMV-game hates otherwise, but it’s a fun bit of cheesiness, and good for a laugh.