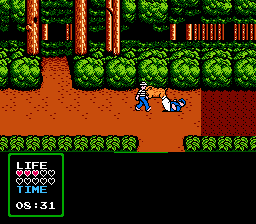 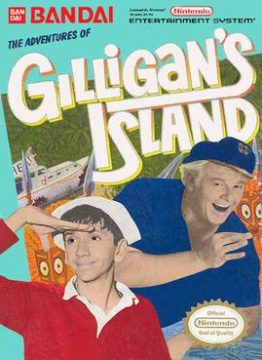 At first glance, the existence of a Gilligan’s Island game for the NES may seem baffling. It’s not just that it’s based on the weirdly high concept sitcom of the same name, which saw the crew and passengers of the S.S. Minnow stranded on a desert island for nearly three years, but it’s another thing entirely that the game was based on a show that was so antiquated. By the time the game was released in 1990, Gilligan’s Island had been off the air for over twenty years, with repeats in syndication. Why would Bandai feel that kids of the nineties needed a video game that chronicled the exploits of Gilligan, the Skipper and the rest of the castaways after their ill fated three hour tour?

A possible theory is that the publisher weren’t worried about the kids so much as they were their parents. Outside of the oft-discussed ‘radicalization’ of the 90s, another big marketing trend at the time were cinematic reboots sitcoms that the baby boomer set would recognize from their childhood in hopes they’d buy tickets for themselves and their burgeoning families. In a very short timespan, the box office was dominated with the likes of The Addams Family, Little Rascals, and The Beverly Hillbillies, just to name a few. Seemingly ahead of the pack, Gilligan’s Island appears to be an attempt to lure parents and grandparents into a purchase by using a familiar brand.

Now if Gilligan’s Island (technically titled The Adventures of Gilligan’s Island, though only on the game’s box) were just an attempt to cynically slap a known title on a mediocre platformer and call it a day, then the datedness of the license would be the only thing worth mentioning. However, veteran developer Human Entertainment attempted something more ambitious by making Gilligan’s Island an adventure game of sorts. Each level is called an episode – though not based on any episode of the show – and each has a sort of continuity between each other. In each episode, a series of tasks has to be completed around the island to help prolong the survival of the castaways to the next episode. 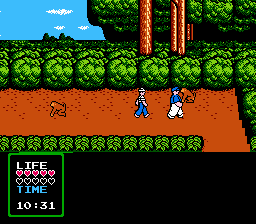 Unfortunately, every mechanic surrounding the intriguing premise is built in either the most tedious or agonizing way possible. First, the game attempts a sense of synergy with the show by having the player control the Skipper while babysitting an AI-controlled Gilligan, whose presence is necessary to complete some of the tasks as well as finishing the level. If you travel too far ahead or Gilligan wanders into a hole, you will lose him and either have to find him on whatever screen he landed on or use one of the very limited rope items to ‘pull’ him back to Skipper’s location. Second, each level is a near impenetrable maze, and there’s in-game map to help you collect your bearings. Worse, the layout for each episode is different from the last, meaning by the time you’re comfortable navigating one level, you’ll be whisked off to the next and forced to learn the new terrain. These headaches could be manageable if not for another arbitrary restriction: there’s a time limit. Yes, in midst of having to find the Skipper’s little buddy after he wanders off, aside from the fact everything will cause your character to tumble over for a couple seconds every few steps, despite that you’ll spend most of your time being very lost and even though the Skipper’s walking speed could be best described as a casual stroll, you’re also kept on a very strict schedule in which to complete all your chores.

And that’s really the best description of the game’s tasks: chores. Completing a level is simply a matter of knowing which part of the map to go to next. For example, in the first episode, you’ll meet the Howell’s who tell you they lost their wedding ring. Next, you’ll find a tree which, presuming he isn’t lost, Gilligan will climb and find the ring, then you’ll go back to the Howells, who tell you to see the Professor and on and on like that it goes over the course of the game’s hour long playtime. Occasionally there will be a boss fight against foes similar to encounters from the show, such as a giant ape or a racially insensitive native. Unfortunately, they don’t do much to break up the monotony as all boss encounters are determined by whoever gets the first strike, allowing the other opponent to be stunlocked and bludgeoned to death.

All the while, Gilligan and Skipper chatter can be seen in the game’s HUD in a manner akin to Star Fox, sniping at each other with humor well below even that of the show it’s based on. After the fiftieth or so repetition of the same lame joke, you begin to wonder if the game wasn’t designed as some kind of stress test for your sanity, twisting and pulling at your brain as you try and remember if you’ve been on this screen before, searching your memory for any recollection of the last 5 or 6 tries you’ve attempted on this episode before the ever ticking clock reaches zero, all the while ignoring the constant flow of scrolling text in the corner of your eye over and over and over.

This is all hyperbolic of course. Human Entertainment has a reputation for creating ambitious games that stretch themselves a little beyond their means, such as Clock Tower or Monster Party. In that way, Gilligan’s Island is a fitting title for their catalog: a strange oddity that is at least worth a cursory glance to gaming historians despite being a real mess in the design department. It’s not much more playable than your average piece of nostalgia bait, but its heart is in the right place at least.