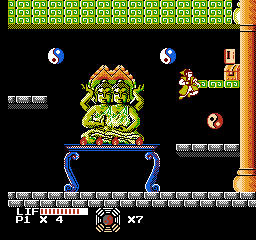 You will likely have noticed at some point that not all NES carts are of the standard flat gray variety. These are unlicensed NES carts made by companies who somehow skirted Nintendo’s approval, such as the flat black carts of American Video Entertainment or the glitzy gold carts of Camerica. The most famous unlicensed publisher was Tengen, who primarily specialized in converting Atari’s arcade hits to the NES (and were often at the bad end of several lawsuits versus Nintendo). The most infamous unlicensed publisher was Color Dreams, whose pale blue carts soon became known as a mark of anti-quality. Before they changed their name to Wisdom Tree and specialized in the development of infinitely mocked religious-themed games, they published a few games by a Taiwanese outfit known by several names like Joy Van, Thin Chen and Sheng Qian, but they are most often called Sachen. Sachen has made about seventy unauthorized NES games and very few of them are ever worth playing. Master Chu and the Drunkard Hu is a fair example of their general quality; i.e., pretty damn awful.

Playing as Master Chu or the Drunkard Hu (note that an alcohol reference would never be on a sanctioned NES game), you have to collect eight yin-yang symbols in each level and kill the boss. Simple enough in theory, but there are many frustrations that make the process tedious in practice. First, your only weapon is to shoot out tiny magic bullets that often take several shots to defeat most enemies, even the small snakes and spiders that would be cannon fodder in any other game. You can collect these scrolls to shoot two and then three bullets at a time, but taking just one hit drops your power down a level, a similar controversial system as seen in Castlevania: The Adventure. The other action button flicks out what seems like it should be a melee weapon, but it’s completely useless for dealing damage and only exists to block enemy projectiles, and it’s even sort of useless for that purpose too. This stupid block replaces what would normally be the jump button, where you have to press “up” like a Commodore 64 platformer, and you just never quite get used to it.

Your character moves sluggishly around the screen, but each stage is relatively small. Each stage also looks very similar to each other except for the first level, which takes place outdoors as indicated by the sky and the trees, and a level near the end which takes place in the clouds for some reason. Almost every other level looks the exact same, with similar ornaments and statues making them seem like monotonous corridors of a Chinese palace. While the levels are just flat chambers, your goal of finding eight yin-yang symbols causes you to stay in them for longer than you’d probably like. Most of these symbols are hidden, occasionally in not-very obvious places, and you just have to keep shooting air in order to uncover them while pests chip away at your lifebar. The enemies are pretty generic, like the aforementioned snakes and spiders, and then there are these weird blue worm-like things and these obnoxious floating halos which are hard to dodge. With your slow speed and odd jumping physics (not to mention there’s no movement inertia if you just fall off a ledge), you’ll inevitably take damage because your character is awkward to control. You can grab these moving little men to fully restore your life and the game is somewhat generous with bonus lives, but it’s cheap balance to compensate for fundamentally flawed gameplay.

In contrast, the bosses are relatively easy once you realize they all attack the exact same. They’re a bit bigger than normal enemies but mostly unimpressive, like this dorky evil tree and this squat blue guy in a helmet. They often stand in place and toss out several projectiles one after another before jumping straight up or to the left or right and firing more projectiles. The only times when your block is useful is against these cookie-cutter supergoons, and even it’s not really needed once you realize the incredibly simple pattern of the bosses and how you don’t take damage while they jump through you horizontally. There’s very little strategy in dispatching the bosses and they’re even more boring than the yin-yang fetch quests comprising the main stages. The final boss, if you could call it that, is just a full body version of those Shiva statues you often encounter in the backgrounds, and once it’s easily beaten, you get a crappy non-ending of flying in front of some goddess that lasts about four seconds before you plop back to the title screen.

Master Chu and the Drunkard Hu‘s main problem is that it’s just uninspired and repetitive. You only need to play the first level and get the entire idea of the game, as it almost never changes for the remainder of its ten levels. The final three levels are just boss fights, but as those are even dumber than the main levels, that’s not really a substantial change. A good game should offer variety as motivation for encouraging you to play further, but this game has no surprises down the line. It’s also pretty shoddy as an action-platformer with a weak weapon, a worthless defense mechanism, and pressing up on the D-pad to jump on the NES controller of all things. It’s also no prize in the visual department with samey graphics and dull black backgrounds, and the only music you get for 99% of the experience is the same annoying fifteen-second looping stage tune and unmemorable boss track. The only thing the game really gets credit for is putting the effort into making a different sprite for Hu that isn’t just a palette swap of Chu, but good luck finding a willing second participant to play as Hu in a two-player round of this pale blue turd with you.