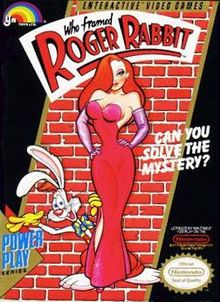 Who Framed Roger Rabbit was a cultural phenomenon when it hit the silver screen in 1988. Based on the novel Who Censored Roger Rabbit?, it blended high-quality animation with live-action and depicted a world where cartoon characters lived with actual people. It demonstrated the fantastic acting talent of Bob Hoskins to an American audience, starring him as private eye Eddie Valiant investigating a case of alleged infidelity that turns into a Toontown murder mystery. The film proved another big hit for Robert Zemeckis after the explosive success of Back to the Future was finally cooling down, and it helped renew interest in Disney, Warner Bros, and the “Golden Age of Animation” from whence Mickey Mouse and Porky Pig came. It was also infamous for having Christopher Lloyd’s uncanny toon-eyes from Hell terrorize a generation of children. That’s a lot of points going for its success, which naturally translates to lots of merchandise, and this further translates into the licensing of video games based on Eddie’s adventure. There were several released for various systems, none of which were particularly notable, but the focus today is on the NES game, which goes a step beyond “meh” into outright “ugh”. 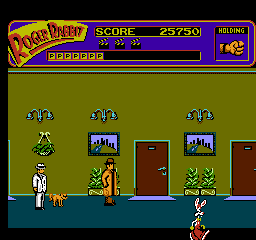 First, it was published by LJN, whose rainbow logo is often seen as a mark of death on any box cover which it appears. It was also developed by Rare, who made some truly bad “bill-payers” before their success flew into the stratosphere with Donkey Kong Country and Killer Instinct. They certainly had some high points on the NES, like Solar Jetman and Battletoads, but at least half of their 8-bit output was made just to survive as a company. Who Framed Roger Rabbit is one of those typical games that only existed as a cash-in on a marketable product without much effort put into making it a competent game, but at least most games like that are relatively simple despite being sloppy or cheap. This rabbit turd isn’t just sloppy and cheap, but it is also remarkably confusing. It seems to want to be a third-person graphic adventure game, a claim which only belongs to Nightshade and, to a lesser extent, the eye-searing port of King’s Quest V. Yet some aspects make it feel more like an action game, such as the imposition of limited lives and continues, but it certainly does feel like a Sierra-type game on the premise that death will happen frequently and unfairly.

You start the game out in Eddie’s office, where you can search cabinets and mouseholes, which always takes several seconds to process for some reason. Then when you get outside, you can take a wallet for trading at shops, but a potted plant will drop down, and you instantly lose a life if it clonks you. No lifebars, just lives, which really bites considering how easy it is to be killed by a passing rat or snake. There are animals just about everywhere you go who leap at you if you get too close, and they sometimes guard helpful items, so you need a corresponding distraction item to lure them away. However, you’re not told where to go for these items, amounting to a bunch of pointless searching in various apartment rooms. The overhead map perspective gives absolutely no indication to what you’ll expect from a building except its size, and while it may be too much to ask from eighties NES technology (albeit late eighties), some sort of map or indicator for your goal would be really helpful. You’re supposed to find all four pieces of Marvin Acme’s will and eventually defeat Judge Doom, but figuring out where to go is on par to most Sierra games, if not even worse. 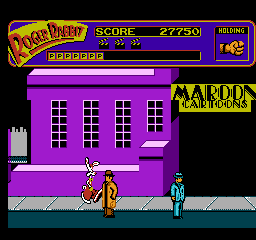 There’s also a lot of obnoxious obstacles in your way, like the aforementioned killer animals. Roger tags along with Eddie, but he’s absolutely useless for everything except being a load, where random birds can abduct him and cost you a life out of guilt. Doom’s weasels will also butt in to kidnap Roger, where you’re forced into a mini-quiz where you need to answer a bad pun. Get it right and they let Roger go while laughing, get it wrong and they off Roger while you lose a life. The pun answers are mostly obvious, nothing remotely on the level as Monkey Island’s insult swordfighting responses, but you’ll get sick of these after the first one with how commonly the dang weasels accost you. To travel the tunnels on the map, you need to call Benny the cab, who can’t drive off the roads and the movement feels far more restrictive despite the minor speed increase. Of course, there are dark caverns that require you to find a light, just like the not-part from the film where Eddie had to go bumbling about in caves for about half an hour before finding a piece of the will. Occasionally, you’ll have to start punching weasels, but the “combat” system is just absolutely horrible. You need to charge up your punches, but you need to rapidly tap the B button instead of holding it, it takes an incredibly long eight-ish seconds to fully charge a punch, and you need to be moving before charging or you just hop in place like a fool. What other “adventure” game has a last battle that forces you to wind up punches for ten minutes just to make slight dents in the final boss’ health, but only one hit can kill you and blow all the time you wasted on it? Even if you can make it to Judge Doom, it’s really more trouble than it’s worth to try and beat him. 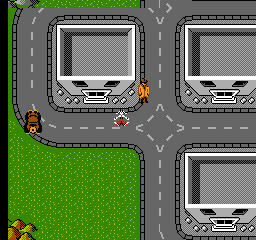 Heck, it’s really more trouble than it’s worth to play this game. What adventure game gives you limited lives and continues anyway? Though it does have a password system that exactly saves the items you’ve found so far, but you start out again from Eddie’s office every time and you need to plod all the way back to where you last died to resume your investigation. But you’ll likely lose interest in “who framed Roger Rabbit” and instead investigate the mystery of “who in LJN or Rare is responsible for this travesty.” The only amusing bit about the whole package is that you can find Jessica Rabbit’s number in-game, and it used to be an actual toll-free number you could call where a recording would give you advice to progress in the game. It was cheesy, but it was actually helpful for players back then to do more than blindly stumble into the next building hoping to find a piece of cheese bait. The original intent of the number has long since been discontinued in lieu of a sex chat hotline, but that’s arguably a more preferable idea to playing this game. Who Framed Roger Rabbit is one of the most colorful and inventive films of all time, but the NES adaptation is a complete miss on all sixes. This game is bad, and it’s just programmed that way.