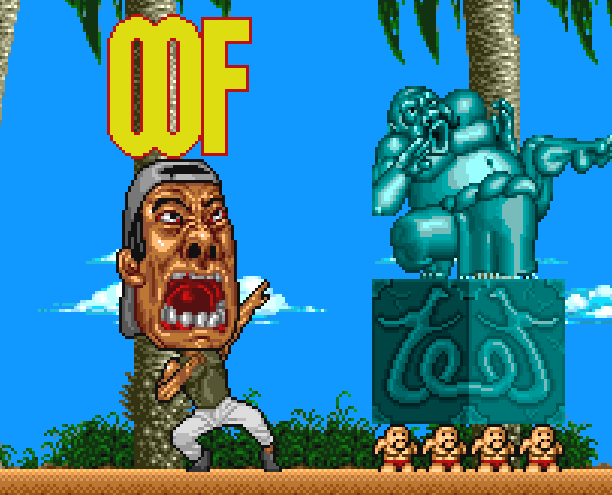 Some games refuse to be classified by any conventional definition. Trio the Punch‘s existence defies all explanations and laws of reality, as it establishes its residence right on the junction of “kusoge” and “amazement”. It’s basically a 2D beat-em-up similar to Irem’s Kung Fu Master. Most of those games have you fight waves of humans who mindlessly rush forward before you punch them off the screen. Trio the Punch has you battle a giant bronze statue of Data East’s de facto mascot, Karnov, carried around by four tiny Karnovs, as it shoots out streams of fireballs from its foot. And yes, it only gets crazier from there. 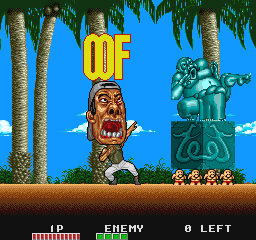 Trio the Punch makes absolutely no sense, nor is there any explanation accounting for why it’s as much of a virtual drug trip as it is. Its origin story is flummoxing – it apparently started as a sugoroku (board) game, but over the course of its development, it somehow morphed into this strange product. It was also developed by the same team as Karnov and Atomic Runner Chelnov. When it comes to Trio the Punch, it almost seems as if they tried their hardest to confuse and/or disturb their customers. Trio the Punch is like a visual representation of the writings of William S. Burroughs if he was a Japanese video game designer.

For starters, the game’s subtitle, Never Forget Me…, sounds like a tagline from a cheesy romance movie, yet this is a pure action game without any semblance of a plot. Somewhat appropriate to the game’s name, you have a trio of characters from which to choose: Santos, a tough-guy brawler with a backwards cap; Kamakura-kun, the obligatory ninja; and Rose Sub, a barbarian who bears a striking resemblance to Taito’s Rastan in how he holds his weapon, be it a torch, sword, or morning star.

These three warriors are trained by Master Chin, a strange old dude who’ll fight you in a couple of levels and pops up in between stages to play roulette. (This seems to be a remnant of its roots as a sugoroku game). Here you can switch characters, or power up (as Chin spouts his catchphrase, “Lucky! Cha cha cha!”) or power down, if unlucky. The stages themselves often end really quickly, with the goal being to destroy as many enemies as necessary until they drop yellow hearts (or else the stages keep looping infinitely until you snag them). The bottom of the screen indicates how many hearts you need to collect until the stage boss appears, and you complete the stage upon termination of the boss. Your characters attack with their main weapons and can perform a magic attack once per stage, which comically enlarges their heads.

This would all be fairly straightforward if it were not for some of the wackiest enemies in the history of forever. Karnov, everyone’s favorite mustachioed Russian strongman, has somehow been cloned by the dozens and can be found in normal, winged, diving helmet, or purple-skinned, projectile-hurling incarnations. He is even joined by Chelnov, who shows up as a fairly tough boss sporting a comically oversized hammer.

You’ll also face off against bosses like a large floating fist, a massive totem pole topped with an evil knight chess piece, and a massive bronze foot which can be foiled in a fashion similar to Bowser at the end of Super Mario Bros. 3. One particularly amusing boss is a pink sheep which fires smaller sheep at you, and after you beat it, you get “cursed” and transform into this sheep for the next stage. Weirder still, if you put a quarter into the machine at the continue screen and press start, you can observe the face of a statue suddenly morph into a happy clown mask.

It simply cannot be overstated how the absolute weirdness of this game completely defines its identity, such as the fight against Colonel Sanders, whose head explodes to release a goofy purple bird who assaults you with small chicken drumsticks. One bit has you fighting some red-clothed zombies in front of a carousel as you’re shrunken down to size and the moon in the background violates the laws of perspective, bouncing all around the screen. The third set of levels takes place in old-style Japan, complete with bamboo forests, a large castle wall full of sickle-dropping ninjas, floating katanas serving as platforms, and a moonlit field where the action freezes after “WEEBLES FALL DOWN!” spells out on the screen.

The fourth collection of levels is where the goofiness wears off, and you fight a bunch of brightly-colored blobs and tough robots in a sci-fi scenario. Even if this part of the game is lackluster compared to what came before it, you must fight on to the final level. You find yourself in a public park and reach a fountain as a seemingly harmless bird flies about in the air. However, to end the game, you must kill this bird, as well as a dog, butterfly, and another bird. Cryptic messages pop up on the screen as you murder these poor, defenseless animals, one of which spells out “CRUETY”. It’s an anticlimactic fight that somehow causes a large, scary pair of eyes to appear underneath you, and the screen pans out to reveal that you are on top of some massive cosmic horror which promptly sinks back into the ground and presumably disappears forever.

It is this ridiculousness upon which Trio the Punch is remembered today, as opposed to how it plays. However, it could be said that the game is even more memorable because of its slipshod gameplay. It’s incredibly difficult to hit enemies sometimes. It also gets somewhat redundant after a while to have to vanquish enemies until the boss appears, and bosses are sometimes just normal enemies powered up to take more damage. A few segments require some platform jumping, which often turns out to be rather screwy. There are several glitches, as well, such as an early one where you fall through the floor and are stuck unless you restart.

Nothing about this game is done well, and yet everything just meshes together so perfectly into one gigantic dose of pure nonsense. It’s very much worth playing, especially if you possess a David Lynch-esque appreciation for the bizarre.

Trio the Punch remained in the arcades, until its release on the PS2 as part of the Oretachi Geesen Zoku series. It’s just an emulation, and a poor one at that, running at a choppier framerate. There was also a mobile phone port released by G-Mode, which adds a stage select and makes some minor changes, like replacing the Colonel with a clown.