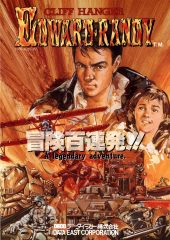 Since the early days of the medium, video games have been trying desperately to mimic movies. It probably began with full motion video laserdisc games like Dragon’s Lair, although that was a fad that lived and died fairly quickly. Ninja Gaiden added cutscenes between levels to tell a story, but the game itself wasn’t any different from other platformers. Modern games like Uncharted and God of War try their damnedest to meld traditional gameplay with a cinematic experience, to fully give the experience of “playing” a movie. Long before any of these, though, somewhere back in 1990, Data East developed The Cliffhanger: Edward Randy, a 2D action game that tries to do the same thing with much more limited hardware, with some fairly impressive results.

Edward Randy doesn’t really bother to hide its inspiration from Indiana Jones. The eponymous character looks like an American action hero, and while he doesn’t wear a fedora, he does carry a whip. The first stage, a boat chase through the waters of a European city, may well have been ripped straight from Indiana Jones and the Last Crusade, which was released the year prior. (There’s nothing particularly wrong with that, though, considering Lucasfilm’s own action games based off The Last Crusade were pretty bad.) There’s a vague plot about a kidnapped girl and a magical prism, which Edward surrenders to save his lady friend, and the whole game is spent getting it back. Given its cinematic ambitions, some more cutscenes would’ve been nice – there are short intro and ending sequences, and brief in-game bits – but the fast-paced action more than makes up for it.

Although the game looks like a standard early 90s arcade game, it ditches the usual concept of side-scrolling stages in favor of auto-scrolling setpieces. Edward does not move through the levels but rather the levels move around him, as the first stage is spent jumping from boat to boat, before latching onto the side of a speeding train. After this scene, the next level is a car chase, with your hero speeding through desert canyons while fighting off tanks, and eventually a gigantic bulldozer. Later levels involve scaling a half-built tower, fending off the arms of a gigantic living statue, and the final stages are based totally in the sky, as you jump from the wings of one plane to another amidst frightening stormy weather.

Graphically, it’s all pretty amazing. Although the action takes place strictly along a 2D plane, there are tons of 3D effects, as enemies leap from the foreground into action, or Edward tosses them into the screen, vaguely like a similar effect in Teenage Mutant Ninja Turtles: Turtles in Time, although not quite as flashy. Many of the stages flip and change direction, using sprite scaling effects a la Sega’s After Burner and OutRun. When flying in the sky, the biplanes tilt, rotate, and do everything possible to fling you to the ground. During the car chase scenes, the trucks will run off cliffs and fly into the sky before thudding into the ground, and, keeping with tradition, things explode quite spectacularly. In many ways, it really does give the experience of playing through the action scenes of a Hollywood blockbuster.

And yet, there’s something that just doesn’t feel right about it. Part of it has to do with the game flinging more enemies at you than you can possibly handle, and part of it is due to the chaotic, screen-shifting backgrounds. The controls are a huge burden, as well, being sluggish and unnecessarily confusing. Edward can only use his whip, which has great range but is very slow to snap. You can use it to latch onto certain objects – girders, planes, etc. – and swing back and forth, which can plow through enemies. All too often, however, it’s easy to grapple onto something when you just want to attack, or attack when you want to grapple. The context sensitive jumping is a bit awkward, too. If you’re on the edge of a vehicle, it’s easy to leap back and forth, but if you’re on a long surface and press jump while holding a direction, you’ll roll instead. Instead, in order to jump, you have to stand perfectly still and then press the jump button.

Having said that, Edward Randy does utilize a unique health system, where your energy is tied to your score. If you kill enemies, it goes up, but take damage and it’ll go down. It’s quite generous, especially since you can fall off your boat/car/plane and leap back into play with only a bit of damage. Still, it seems like a clumsy solution for the somewhat sloppy action. Amusingly, when you fight a boss, his energy appears at the bottom of the screen. The final boss starts with something like 82,000,000 hit points, although each attack shaves off roughly a million of those. Like the rest of the game, it really is something that revels in excess, a true hallmark of Hollywood.

As unpolished as the action is, Edward Randy is still a must play for anyone infatuated with 2D graphics. It’s clearly a title ahead of its time, and it feels a bit like a Treasure game before Treasure truly existed. Indeed, the final battle atop the biplane feels very much like the fight against Orange in Gunstar Heroes. The connections don’t stop there – Treasure character artist HAN was such a big fan of the game that he named two characters in Guardian Heroes, Edward and Randy, in homage. (Randy is the magic user, and Edward is the little familiar animal, whose name was changed to Nando for the English release.) Unfortunately, due to the horsepower behind the special effects, the title fell into obscurity along with similarly impressive titles like Konami’s Xexex and Sega’s Arabian Fight, because none of the home consoles at the time could remotely do it justice.

Edward Randy was scheduled to be ported to the Saturn by Xing, whose Arcade Gears series included several ports of older arcade games, like Taito’s Pu·Li·Ru·La and Irem’s X-Multiply, although plans fell through and nothing came of it. It was also announced for ports to European computers like the ZX Spectrum, although no solid evidence of their existence was ever released. Although an English language ROM of the arcade version exists, it seems to have only been released in Japan.