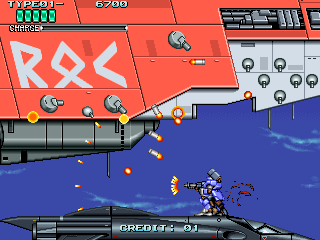 Although you couldn’t tell directly from looking at it, Rohga: Armor Force (known in Japan as Wolf Fang: Kuuga 2001) is actually meant to be the follow-up to Vapor Trail. There have been a few changes in between games, though. For starters, the genre has shifted from a vertical shoot-em-up to a side-scroller. Also, rather than controlling a fighter jet, you now pilot a gigantic mecha. This all combines to make things feel more like an action-platformer in the vein of Contra. The screen now scrolls automatically, as well, which also kind of makes it similar to Data East’s previous cult classic, Atomic Runner Chelnov. 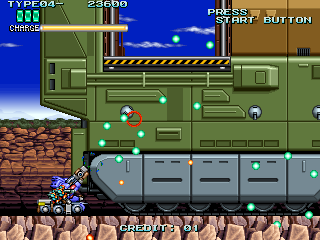 Rohga takes place two years after Vapor Trail. In the distant future of 2001, mechas are the most impressive technology that the military has to offer, with the most important mecha facilities located in Oceania. Coming back for revenge, DAGGER attacks the factories around Australia and New Zealand, and it’s up to you hop in your mecha and stop them.

When you select your mecha, you can choose from four pre-constructed ones with different strengths and weaknesses, similar to Vapor Trail, but you can also build your own. You can customize your melee weapon, your shoulder (secondary weapon), and your legs, with a total of four parts of each type. Your shoulder weapons need to be charged up by holding down the attack button for a few seconds, but naturally are the strongest. These consist of grenade launchers, homing missiles, flame launchers, and an electric field. Your left arm functions as a melee attack and is activated automatically when you’re close to the enemy. These attacks are comprised of your mecha’s fist (called “Nuckle Buster”), an iron claw, a beam sword, and a pile bunker. 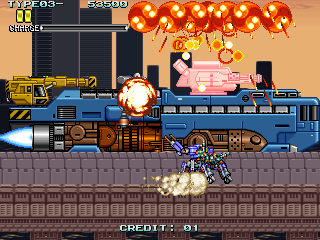 You can also assemble your legs, include the standard two-legged configuration, one with hover jets, a four-legged model, or tank treads. Your standard weapons change depending on what power-ups you find. You can obtain a laser rifle, Vulcan machine gun, grenade launcher, and a cluster gun. You can also pick up tiny little buddy robots that ride on your mecha, which provide extra fire. They’ll scatter if they get hit, but you can easily pick them up again. Given how much firepower is at your disposal, your mecha is also surprisingly agile. You could do stuff like this in Target Earth for the Genesis, but this type of customization is pretty unprecedented for an arcade game.

Once you run out of health, it’s not exactly Game Over. Your robot will get destroyed, but your pilot will eject and continue the fight. One hit will kill you in this form, but you can attempt to wage a final stand and perhaps rebuild it. The game also features branching paths. After you finish the second mission, you can choose between two stages – a hard one and a easy one. Choosing what order you do your missions in will affect the ending. You can only liberate one country in one play through, and in order to get the good ending, you have to play the hard missions. In the level selection screen, it shows your chance of survival on the top left corner of the screen, which is a neat touch. There are some fantastic boss fights, too. In mission four, you fight your way vertically up to the top of a giant tank. In mission eight, you face off against a huge boss that uses a weapon that has the same effect as a black hole, causing the equipment on the floor to get sucked in. 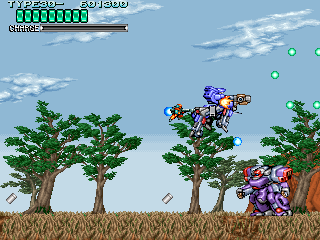 Altogether, Rohga is a fantastic game, and one of Data East’s best. The amount of weaponry and mecha parts make for a substantial number of variations, and the story sequences, branching paths, and multiple endings come together to create an package that’s much more featured-packed than a vast number of arcade action games. The controls are smooth, the music is excellent, and the graphics are high quality. The only unfortunate thing about Rohga is that the arcade boards released outside of Japan are horribly butchered. They removed the level selection, most of the briefings and story sequences, as well as the ability to see all four endings. Instead, you just play all of the levels straight through.

Thankfully Rohga was ported to both the Sega Saturn and the Sony PlayStation in 1997 by Xing, known for many arcade ports in the 32-bit era. Both versions are based on the Japanese arcade version, rather than bowdlerized English release. Included are two modes – an arcade mode, which is faithful to the original release, and an enhanced mode exclusive to the home port. This features a number of small tweaks, including changes to enemy patterns and item appearances. Some legs now have added abilities, as well, including a dash and a double jump. You can choose the arcade music, as well as a completely new redbook audio soundtrack, which is also excellent (though it also would’ve been welcome if they’d arranged the original songs). All of the briefings are now voiced, too, though thankfully these can be shut off, since they can’t be skipped, and they also disrupt the music. Finally, there are FMV cutscenes at the beginning and end, and the title screen changes depending on which move you’d selecting. 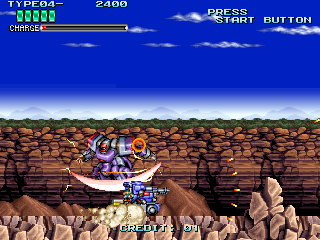 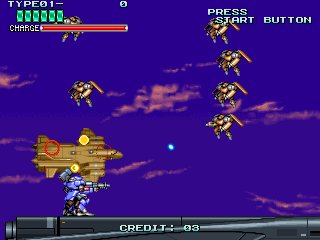 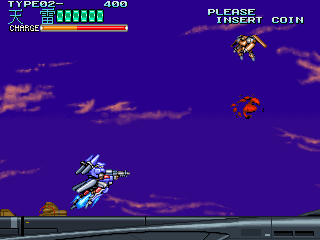