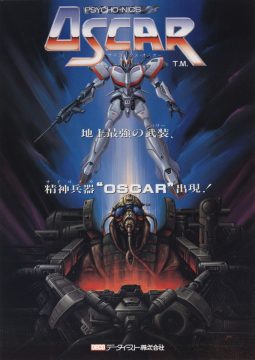 Ever wonder how the Gradius power-up bar would work outside of a side-scrolling shooter? Konami eventually stuck it in the NES game Contra Force, but Data East beat them to the punch, and the result was Psycho-Nics Oscar, an action-platformer starring a little gun-wielding robot. The title, to an American, sounds patently ridiculous – it suggests a deranged horde of New York basketball players teaming up with a cranky green garbage-loving Muppet. For this reason, the marquee in American arcades usually just shortened the name to Oscar, although it’s not like that did much to explain the situation. 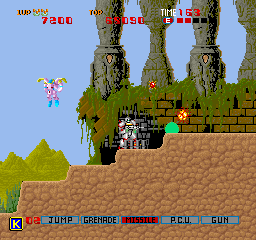 Oscar is actually the name of your mecha, which apparently can transform. It really can’t, outside of the ending cinema anyway, but it can be upgraded in a variety of ways. Data East didn’t change the Gradius power bar much, although they did refine it a bit. For the uninitiated, the bar displays five power-ups in a linear progression. Every time you pick up an “N” capsule, it highlights the next power-up in the line. When it’s highlighted the power you want, you hit a button to get equipped with it, and the power bar resets.

Rather than a “Speed” option, Oscar has a “Jump” power-up ability, which obviously enhances the height of his jumping ability. The next two are subweapons, which act in conjunction with your main gun attack. “Missile” works, again, like Gradius, with a small projectile which travels along the ground, and even up vertical surfaces, handily enough. “Bombs” toss small grenades on a short arc. You can have both Bombs and Missiles activated at the same time, and both can be upgraded several levels.

There are three types of rotating things called PCUs, which provide extra firepower. The last icon is the “Gun” power-up, which improves the firepower of your main weapon. This is perhaps the most important one, because the default gun is not only incredibly weak, but very short ranged. If you make one full rotation through the power bar without picking anything, the last block changes to “Armor”, which will let your Oscar take some extra damage. If you make it through two full rotations, the last spot changes to “Quick”, which activates a rapid fire mode. In conjunction with the most powerful Gun, this makes you into a killing machine. 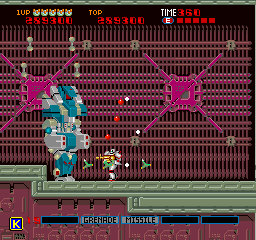 In copying the system so closely, it is, of course, susceptible to the same flaws. Yes, it’s absolutely fun to upgrade your Oscar to the highest level, tossing out a steady stream of missiles and bombs and explosive laser blasts, steamrolling through everything in your way. In your default state, though, or perhaps with only a power-up or two, the game becomes unnecessarily difficult. The stages themselves are well-designed and balanced, for the most part, but the bosses often scatter far too many projectiles to be properly dodged without taking some damage. As a result, the best way to succeed in Oscar is to power up completely, and try not to get killed ever. While you can cause a lot of destruction at the highest level, it’s also just as easy to take a few stray hits and end your streak. Your health doesn’t recharge after each stage either, requiring you to subsist off of the meager energy power-ups occasionally dropped by enemies.

To its credit, Oscar can take three hits by default – more if you’ve grabbed additional capsules, and a fairly large margin of error, compared to other single-hit arcade games – although getting killed sends him back to a checkpoint. Also, while Gradius was stingy with the power-up capsules, practically every enemy (except for the infinitely spawning ones) will drop something, allowing you to quickly rearm yourself upon death. While you lose all of your weapons when you die, the power bar stays at the same position, which can also give you a leg-up if you plan correctly. Collecting 20 “K” icons will also grant you an extra life. 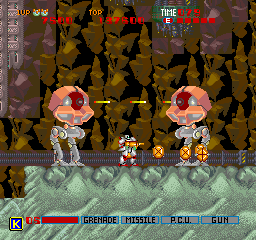 In all other areas, Psycho-Nics Oscar is only a few steps above competent. The level themes are hardly ambitious, taking you through the standard forests, caves, mechanical factories and so forth, but the robot designs are cool enough for a game developed in the mid-80s, when such things were standard. The later stages fall in the trap of reusing bosses as standard enemies, and some obstacles, like the enemy generators, are expectedly ripped straight from Gradius. The controls are solid, though, and outside of the bosses, the difficulty level is stiff, but manageable.

While technically Psycho-Nics Oscar blends into the murky miasma of similar arcade titles from the era, it’s still a fun little game, however, the kind that, like many, probably would’ve obtained more popularity had it been ported to a console.  Despite the lack of a home version, Oscar reportedly influenced the look and feel of Turrican, which was released approximately two years later in 1989. They both share a similar aesthetic, although Turrican has a more European feel, having been developed in Germany and all.