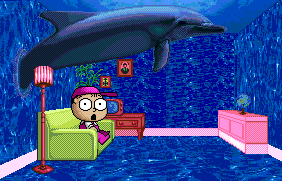 Sega’s Panic! isn’t really a game, so much of a toy, something to play with, even though there are no rules. Well, that’s not entirely true – you can technically “win” or “lose” in Panic!, but doing so requires no real skill. And there technically is an underlying game, it’s really only by the most threadbare definition. Panic! is merely an assemblage of silly animations linked together by the common theme of madcap craziness. It’s only a game because someone somewhere felt that it needed to be, and also to justify releasing it on a platform typically known for “video games”.

Panic! (known as Switch in Japan) begins with all of the electronics in the world going haywire. Motorcycle wheels turn square, telephone booths eat people, and televisions everywhere begin to vomit copiously. The problem is some kind of malicious virus in the center of some major computer somewhere. An average little boy named Slap, along with his faithful dog Skip, are sucked into the TV via their Sega CD. Only they can save the day. 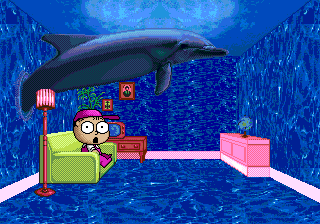 Inside of land of computer, things are really, really messed up. Morphing Mona Lisa heads. Flying cows. Vacuum cleaners that suck up the color of the screen. Moai heads. Hawaiian sumo wrestlers dressed like the Terminator. Explosive hairdryers. Gigantic pigs. Cameos by Thomas Edison. It’s all a little bit strange.

The game is simple – you are presented with some buttons. Push a button, and one of two things will happen – either you’ll see a silly animation and then restart, or you’ll move on to another screen.

Let’s say, for example, your character has just been ejected from one of those flying cows and is plummeting towards the earth. Luckily, he has a parachute pack. But before it opens, you’re given the choice of several buttons to press. Push one, and some intestines pop out. Screen fades out, reloads, and your back to choose some buttons. Press another button, and a sumo wrestler pops out. Same deal, situation restarts. Press another button, and the screen changes entirely to a strange looking devil mocks you about skydiving without a parachute (“somehow I knew you’d FALL for that one, gyahaha”), before switching back to the parachute scene. Press another, and an elephant pops out. Press YET another, and a weight comes out. Press another, and maybe you’ll warp out and move onto the next screen. Now you’re in a cornfield, and a UFO comes out of nowhere. It drops you a remote, which has even more buttons to press. And thus it continues.

The whole game is essentially one big maze made with dozens and dozens of scenes. Sometimes when you teleport, and you’ll move forward. Sometimes you’ll move back. You’ll probably get stuck in a loop many, many times, and it becomes a game of rote memorization to figure out which buttons actually make you “advance”. The game doesn’t remember or mark what buttons have been pushed (except in one circumstance – more on that later), which can get massively irritating. There is an ending, and there are several Game Over screens, some of which end with your mom telling you to stop playing so many video games.

But here’s where you have to let you gamer instincts go – don’t play to “win” it. Play the game to laugh. That’s what it’s there for. Panic! is just filled with crazyt non-sequiturs The game’s sense of humor is very much stylized after Terry Gilliam’s cut-out animations from Monty Python, complete with a cameo by the giant foot. Some of the animations suggest the game was meant for a “mature” audience – in one scene, Slap drinks some potion and breasts stop popping out all over his body. There’s just as much toilet humor, however – at the scene of a bomb test site, a gigantic ass pops up in the distance and farts. In another scene, you can change the falling snow into lumps of poo. Sophisticated, this is not. Still, there are a huge number of incredibly bizarre creations – one of the coolest rooms takes animal bodies and matches them together with household objects to create some truly messed up concoctions.

Additionally, there are several “booby-trapped” buttons to be found along the way – stumble upon on, and you’ll detonate a bomb somewhere on the globe. Sometimes you’ll destroy a national monument like the Sphinx. Sometimes you’ll destroy some random igloo out in the Antarctic. It’s a little silly to see digitized pictures crumble into smoke, and almost a little unnerving after 9/11. But for the record – you can blow up Mr. Rushmore, the Statue of Liberty, and the entirety of midtown Manhattan – but no World Trade Center.

When you first play Panic!, you begin to wonder why there aren’t many comedy video games. It’s not like we haven’t seen humorous games in the past – witness classic Lucasarts adventures like Sam & Max Hit the Road, or silly platformers like Earthworm Jim. The problem is, games are meant to be played over and over. On the other hand, jokes get less funny each time you hear them. Once the appeal of the flying octopi and malicious penguins from Parodius wears off, there’s still a solid game underneath.

Then, after spending maybe ten or fifteen minutes with Panic!, it hits you – the game just isn’t THAT funny. Hit button, crazy thing happens, repeat. At first, its randomness is bewildering. But after awhile, it gets a wee bit tiresome. There’s only so many times a moai head or a stupid grinning genie can pop out before it just begins to get old. The game boasts over 1000 animations, but out of those, how many are actually worth laughing at? A good handful are worth a chuckle, but full out fits of hilarity are rare. This is also why Panic! is only barely replayable, as there’s only so many times you can see the same scenes over and over. There is a level skip that lets you skip to specific scenes, although be prepared to scour over a FAQ to make sense of it. Unfortunately, there’s no way to fast forward through anything, so be prepared to sit through lots of unfunny cinemas to get to the good stuff.

Despite its unique sense of humor, Panic! somehow found its way to American shores via Data East. Apparently, Sega deemed it so popular that it was re-released in 2002 for the PlayStation 2, in Japan only. For the most part, the game is exactly the same. However, the scenes of famous landmarks blowing up have been replaced by fully computer animated videos of the same famous landmarks having diarrhea.

Although it’s far from perfect, Panic! is an amusing experiment from a time when developers were still tinkering with the expanded space of the CD-ROM. At least it’s much better than any of the FMV games released during the era. Still, you can take a look at the screenshot gallery below and be comfortable that you’ve seen a good portion of the best that Panic! has to offer.