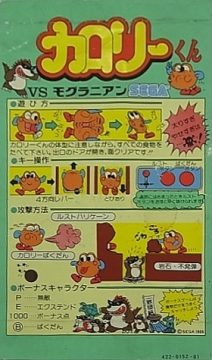 Vic Tokai’s Calorie-Kun vs. Moguranian sounds and shares the visual style of a manga, it’s actually an entirely original concept. As the creators of a number of absolutely zany games (including the NES cult hit Clash at Demonhead), Vic Tokai is no stranger to weird games. This one rather takes the biscuit in the “what” department, as it stars Calorie-Kun, a round whatsit that looks like a cousin to Pac-Man who goes around underground tunnels eating fruits while dodging groups of vicious moles. Your goal in each level is simply to eat all fruits and use the various ladders strewn about to reach the exit while avoiding your moley pursuers. 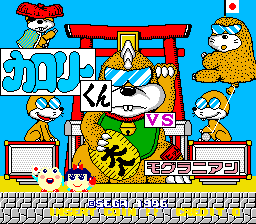 To defend against moles, you can shoot out a gust of air which blows them to the nearest wall. They will normally be stunned for several seconds, but do take note of all the glowing missiles and mines all around the map. If you push at least one mole back into the tip of an explosive, they are permanently extinguished, although a replacement enemy usually wanders in from the entrance several seconds later. 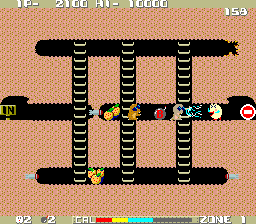 Now things aren’t quite as simple as they first seem, as there’s a bar at the bottom of the screen which indicates Calorie-Kun’s own calorie intake. Eating fruit boosts the bar while running around or firing air gusts depletes it, and you must constantly be mindful of this indicator in addition to dealing with the moles. Nothing quite like this calorie meter gimmick would be seen in any other games aside from Yume Penguin Monogatari, a Konami platformer about a penguin attempting to lose weight for the sake of his girlfriend. That game was all about losing as much weight as possible, though; in Calorie-Kun, the scale tips both ways. If you eat too much too quickly, your calorie meter can push beyond the safe blue range and cause you to grow fat. If you’re in a narrow tunnel as you grow, you become stuck and are a sitting duck for moles until your calorie bar drops back to blue. Some tunnels allow you to waddle through even with an expanded form, but if you continue to overeat, you’ll eventually explode and lose a life. Equally great a danger is losing too many calories, which thins out Calorie-Kun and leaves him disturbingly anorexic if his calorie meter drops to the red zone, slowing his move speed until the meter runs out and he dies. 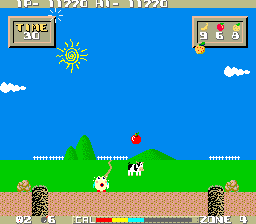 Aside from your primary air attack, you also get a limited quantity of bombs which can detonate other explosives, kill enemies below you on ladders (though the timing is tricky), blow open thin walls, and vanquish enemies which cannot be shoved by your air blasts. You can grab more bombs from destructible walls, but you really need to be discretionary with their use, or you may find yourself trapped in a hole where an explosion would be the only way to escape. You may also find a lucky cat inside walls which leads you to a bonus stage, where you can rack up quite a score if you collect lots of fruit while avoiding moles and bomb rocks. It’s not always easy to blow open walls what with robotic turtles attempting to foil your progress. Wait, what? Yep, you don’t just get moles to deal with, but also ominous bronze turtle-esque monsters which can’t be blown back by your air, only stunned by it. 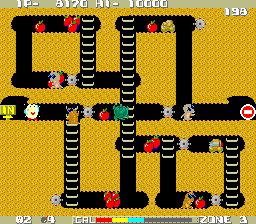 There are also mole tanks which act like turtle but move even faster, and starting at stage five, you face nefarious samurai moles which catapult towards you at top speed. Just as bad are these shield moles which defends all of your air gusts, so you’ll have to try and kill him using bombs or rocks. Dealing with increased amounts and toughness of enemies comes to feel like more of a chore than a challenge. In later stages, it gets incredibly irritating to be barred from shooting simply because you’re on a ladder. This becomes apparent at the major difficulty spike at level 5, and it just gets worse from there on out. 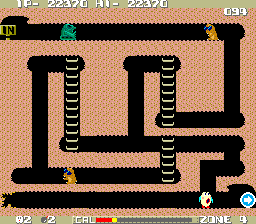 Calorie-Kun‘s slow pace is probably its greatest fault, as it gets insanely vicious early on, and the overall quirkiness may not be to everybody’s liking. Its somewhat tinny music also gets annoying after a while, but at least its graphics are suitably colorful. It conveys an interesting charm and plays differently from most other maze-like single screen arcade games of the time. It’s got nothing on the premier subterranean action games of the eighties (that being Dig Dug, or even Mr. Do), but it’s yet another one of those “Sega titles you’ve probably never heard of” worth a look. It received no console or computer ports and never made it to any future compilations, so good ol’ MAME is the only to check it out. 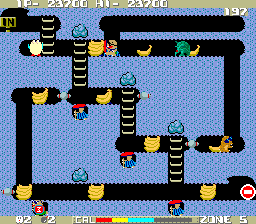