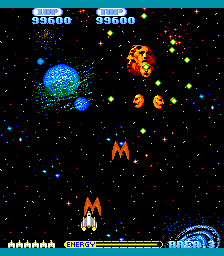 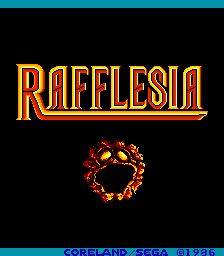 The basic formula for a shoot-em-up game is to set it in space and/or over an expansive landscape, make your ship futuristic yet only able to take one hit, and fend off waves of enemies until a boss inevitably shows up. Most such entries in the genre tend to be vertical and akin to Namco’s revolutionary hit Xevious, and though Xevious surely did have a lot of imitators, most of them avoided being labeled rip-offs by offering something unique to the shmup pool. For example, this obscure Sega shooter called Rafflesia is nothing special in the gameplay department, and at first glance, it doesn’t seem like anything too outlandish. To anyone who gives it a play, however, your mind may be scarred in one of two ways… Well, maybe not scarred, but at least bruised.

Rafflesia is another collaboration between Sega and Coreland, known for some of Sega’s more bizarre games like I’m Sorry and My Hero. Those games have bright and colorful graphics with ridiculously cartoonish characters, but Rafflesia is far more straitlaced than these prior works. It looks like how you would expect a shooter to appear, taking place over a vast expanse of space with endless stars and several planets and galaxies rolling by every now and again. Your goal is simply to survive as long as you can against the forces of evil and not get hit by anything. You only have a basic twin laser which is sufficient enough to roast most enemies, but the alternate fire button gives you rapid shots at the cost of your energy bar. Picking up flashing energy drops restores your energy, and you’ll occasionally find a swerving red star which boosts the power and size of your shots. You must destroy the boss at the end of each round, and there are eight stages in all.

Rafflesia is, by technical definition, as straightforward a shoot-em-up as you can get. It is a competent shooter, albeit an incredibly unforgiving one. But the main feature here is more how the game looks and sounds instead of how it plays. Are its aesthetics outstanding? Not by technical definition. No, the main appeal is just how freaking creepy this game is, perhaps with the name Rafflesia itself (a plant whose fetid stench has earned it the moniker “corpse flower”) hinting at a macabre touch. The only thing you see on the game’s title screen is a gigantic twisted face with void yellow eyes and a wide gaping mouth full of empty darkness. This alien menace may be the Rafflesia after which the game is named after, and this spooky jerk drops down at the end of every round to barf up the stage boss. Each boss is a large monstrous head which generates even smaller heads for you to fight, flying about in random and erratic patterns as the main boss remains invulnerable. After you take out enough of the baddie’s minions, it goes completely insane and becomes even scarier as it fires out rapid projectiles, though you are now able to kill it. The sinister enemy visages compliment the infinite void of space through which you keep floating, never changing as you propel through the hollow emptiness of the horizon-bereft universe. The music is also unsettling, with a somewhat dismal (albeit catchy) tune complimenting your bleak journey until the boss shows up, where the ambience shifts to panic with a quickly looping horror track. This game isn’t fundamentally disturbing like Chiller or Splatterhouse, but it casts a more subtle incarnation of unease that may bring to mind yarns about haunted video games (most of which are poorly written, but that’s besides the point).

Rafflesia is certainly not the most impressive shmup to exist or have existed during its time, but it at least stands above most of the other Xevious clones with its decidedly disturbing antagonist design. It also is relentlessly evil even by shooter standards, where even super-experts at Cave’s Mushihime-sama may run into considerable tribulations attempting to beat this old-school shmup. If the game’s bizarre creature design does not perturb you, then the outrageous difficulty just may do the job instead. You only get three lives by default and no continues, and the enemies are formidable and relentless. There’s a good variety of normal mooks that fly about in different patterns; some may tackle you from the side of the screen, while others dance around taking potshots before making a beeline towards your ship. They only get tougher and more numerous the further in you go, and each new boss you face is even worse than the last. The enemies they generate are unique to them and they are hellions, like the three slowly floating rock heads spawned by the multi-faced glob at the end of stage three, each one taking a lot of punishment as they slowly pursue you, spitting enough bullets to almost qualify the game as a prototypical manic shmup. Good luck even getting to the third stage to face this terror, as it’s even hard to clear the first unless you practice up enough. Arguably, Rafflesia doesn’t deserve as much practice as better-made shooters to precede and follow it. While not an out-and-out bad game, its mediocre mechanics paired with its nigh-unfair challenge plateau make it unessential to play. Still, if nothing else, it’s worth at least a brief check to see its gruesome gallery of ghoulish goons.