1991 was a big year for the beat-em-up genre, with big hits like Streets of Rage and Knights of the Round being released. Then there’s Taito’s colorful, infamously weird Pu·Li·Ru·La (alternatively spelled Pu-Li-Ru-La or PuLiRuLa). 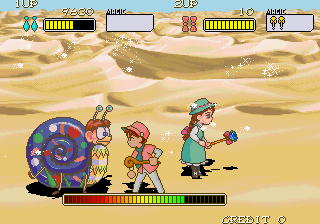 The game’s story starts off in a world named Radishland. Time in Radishland’s many villages flows properly thanks to the dedication of a Keeper that perpetually turns a key deep underground in each town. When one of the keys is stolen, however, time stops and everything is warped and distorted in odd ways. Two kids named Zac and Mel team up to journey across the land and get the key back. At the end of each level they confront a bizarre enemy who turns out to be a possessed Keeper that tells them where to go next. The first two levels of the game seem typical – a small town and an icy mountain – but from the third level on, things get more unusual. 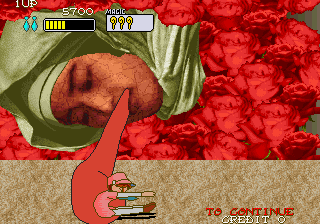 Pu·Li·Ru·La’s subsequent areas are incredible sights to behold, taking a number of disparate visual assets from digitized photographs of real people, backgrounds made of classical paintings, and M. C. Escher artwork, and even a somber but hopeful moment that wouldn’t be out of place in a Zdzisław Beksiński painting. The remarkable thing about the game’s graphics is that it all fits. It goes for a bittersweet tone similar to Earthbound, without ever getting as depressing as Silent Hill 2 or Mother 3. A standout moment is found after a desert level. Zac and Mel learn that the desert is so vast because the Keeper of a nearby town has absorbed all the water and turned into a psychedelic snail creature. When he is defeated, it rains so much that the entire next level would be destroyed by the resulting flood if not for time in the town stopping. 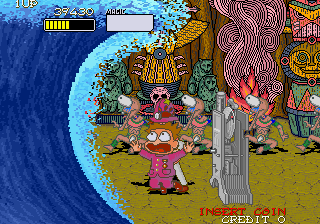 In stark contrast to the game’s ultra-cheerful early areas, halfway through this stage you’ll come upon a large number of corpses. Pu·Li·Ru·La makes this situation depressing and somber without any extra text or dramatic gore. Instead, we just see the bodies huddled together, with a few in the middle reaching up as if to escape. A cartoonishly macabre touch rounds out this part of the game as a unique enemy is fought in front of these victims. When the players approach, a large number of red, angry flowers blossom from the ground in front of the corpses. When defeated, they turn into happy glowing flowers instead of disappearing or turning into animals like other enemies in the game. 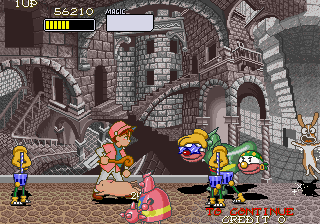 Pu·Li·Ru·La is often discussed in terms of how “insane” or “crazy” it looks, and the graphics do get a bit out there. However, not as much is written about this careful combination of charm and menace found later on. The game’s villain is a large figure whose head is shaped like the planet Earth, and he’s fought in a dark room that lights up with dozens of eyeballs staring at him any time he attacks. When he’s defeated, the heroes take the final key back to their home, only to find that their town’s robotic cop Keeper is the actual final boss! After he’s beaten, he reveals that he was overtaken by an evil spirit because of the misery of his monotonous life. 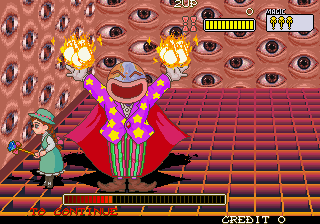 Unfortunately, some of this is lost in translation. While the game did receive an official English release, it’s also laughably bad. Still, the story is simple enough that it’s not too difficult to follow. One silly (and slightly sexual) part was cut during localization: a pair of gigantic women’s legs hanging out of the background of one of the areas. In between them is a door, with a pink elephant that runs out if you hit it.

The nature of the game’s world is interesting, but the real draw of the game is how colorful and well animated its characters are. Zac and Mel both look great, and many of the game’s sprites look like they could easily be the work of CLAMP. It also features real-time shadows, impressive for a 2D game. 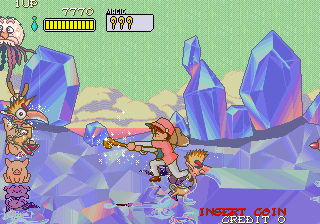 It’s a good thing the visuals and setting are so well executed, as besides the unique scoring system, the game doesn’t have much else going for it. The music, while appropriately cheery, can get extremely repetitive. The action also never really reaches the bar set by the game’s outstanding graphics. Further, while Radishland’s would-be heroes sport different looks, their abilities are identical. Pu·Li·Ru·La gives players three buttons to work with. One button makes the characters jump, while another is the attack button, which is used to smash enemies with the players’ wands. Pressing down or forward at the same time will perform a wind-up attack that does a bit more damage and has better reach. Holding back and pressing attack will quickly strike behind the characters. That’s it, there is no way to grab enemies, no combos, or no extra weapons. Downed enemies will turn into animals, and can be grabbed for more points. Most enemies take only one or two hits to defeat, but even enemies as beautifully designed and animated as the ones in Pu·Li·Ru·La will overstay their welcome when options are so limited for fighting them. 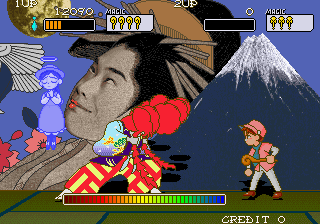 The third button is devoted to summoning powerful entities and elemental attacks to damage every enemy on the screen. Players can only pick up a limited supply of these, but there are quite a few of them to see, and they’re determined based on the digits in the tenth place in your score. For example, our heroes can summon Rapman, an underwear-clad superhero who captures every enemy on the screen and kills them by sealing them inside of a microwave (which he emerged from in the first place). If two people are playing, they can also press the magic button at the same time to cause a blast so powerful that the explosion is shown on the game’s zoomed out map screen. One of these characters, Mr. Mikata, makes a cameo in Bubble Symphony. 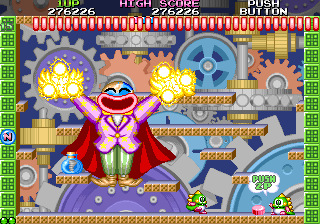 Pu·Li·Ru·La was ported a few times, first for the FM Towns Marty by Xing. It has lower quality sound samples and lower resolution graphics, along with other compromises, like missing shadows and scaling effects, and some of the spell attacks are missing. It was ported again to the PlayStation and Sega Saturn in 1997. The PS1 version cuts some animation frames while the Saturn version looks almost perfect – both have jittery shadows and minor color palette changes, though some alterations in the enemy AI make it not-quite arcade perfect. Ten years later, Pu·Li·Ru·La finally found a good home on the PlayStation 2, though with some slightly blurry visuals. It was released in Taito Memories Joukan in Japan, but unfortunately was omitted from all American and European releases. 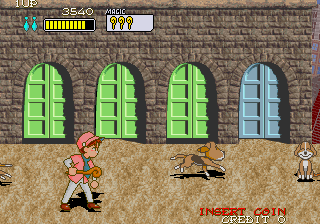 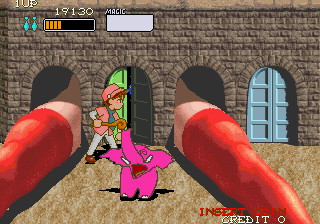