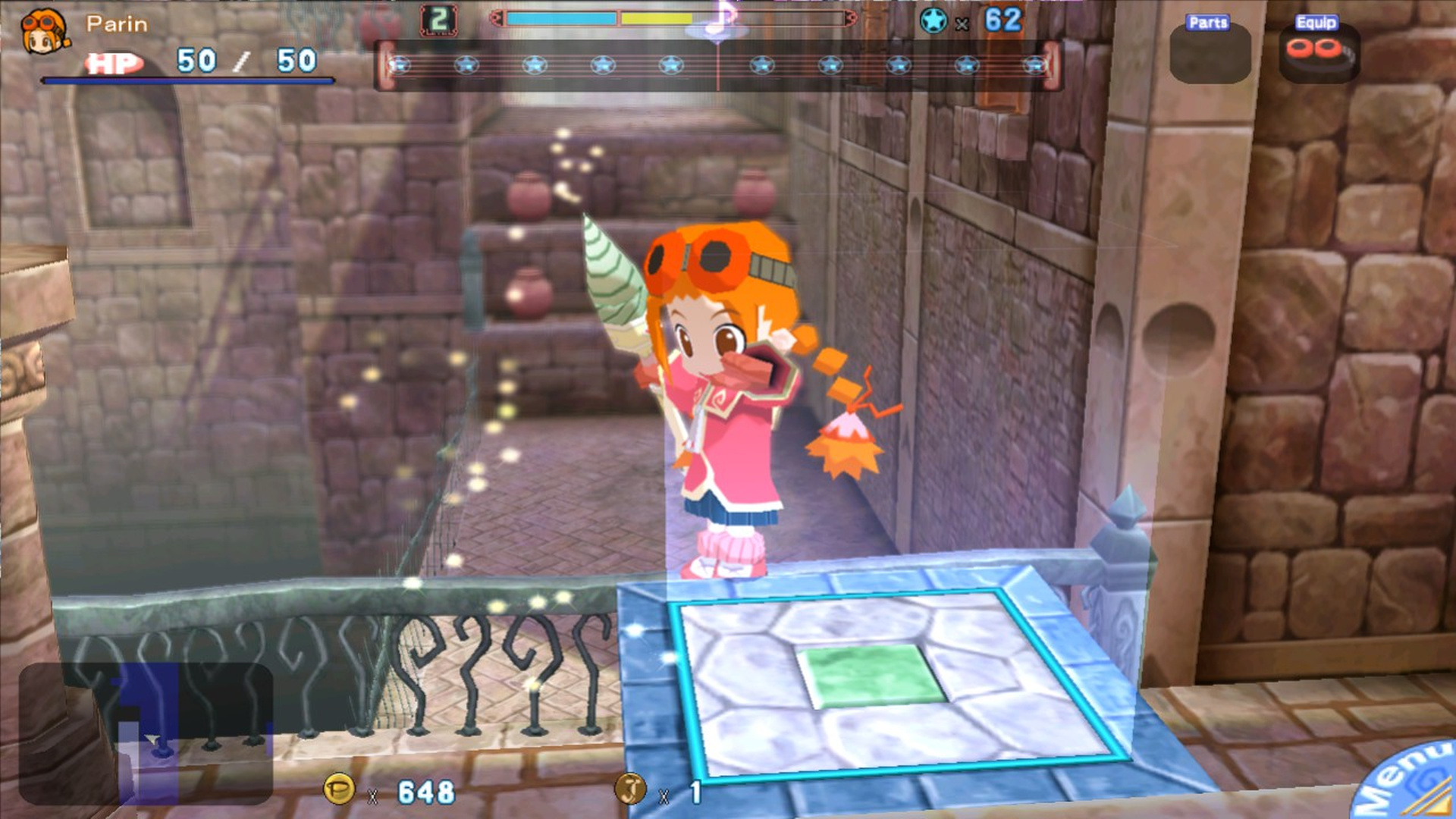 Parin is a twelve year girl, rambunctious as any other, who is shipped off to spend the summer with her grandfather. This would be fun, if it weren’t for the fact that said grandfather lives in a mining town with absolutely no other children in sight. Bored out of her mind, Parin discovers a small town of friendly monsters, hidden in a crack in the wall, who are invisible to the rest of the townsfolk. Unfortunately, just as she’s getting to know her newfound friends, an army of otherworldly creatures known as phantoms invade and destroy the monster village. Eager to help, Parin sets off to explore the hidden world beyond the wall to help the rebuild the town.

Gurumin is a change of pace for Falcom, a company widely known for RPGs. While you gather money and there is some equipment to purchase, it’s really more of a 3D action-platformer, the kind that would seem perfectly at home in the 32/64-bit console era. There is a Super Mario World-type map screen where you can visit levels. There are six types of stages, usually with two or three levels, as well as a boss battle. Each stage also has an alternate, optional variation, which are played in reverse with altered enemy placement and other minor changes.

Parin’s main weapon is a combination of a spear and a drill. She can jab and swipe, and also hold down the button to charge up a drill attack, which is used to destroy rocks, walls and other bits of debris. Repeatedly destroying stuff will power up the drill, while taking damage will power it down. There’s also a handy dash move, which gives you a moment of invulnerability as you spin through danger, plus homing attacks that let you quickly strike at multiple targeted enemies in succession. There’s also a rhythm meter (in the PC version) that changes based on the song. If you can attack in beat with the song, you’ll score critical hits – a neat idea, but it’s hard to pull off consistently. Additional moves can be executed when the rights parts are purchased. You’re also ranked at the end of each stage, granting medals for stellar performance.

Money can be used to purchase healing items, but junk – obtained by destroying objects worn by certain phantoms – will allow you to purchase new equipment. In addition to acting as decorative ornaments, they also have other effects, like detecting all of the treasure chests in the stage or protecting from environmental effects like water. There are a whole ton of these, like goggles, gas masks, and cat ears, in addition to cute outfits for Parin, including swimsuits, maid outfits, school uniforms, and numerous others. Some of these are only obtainable by completing the game on certain difficulty levels, collecting a certain number of medals, or playing the game during certain events, which are dictated by the computer’s/console’s calender. 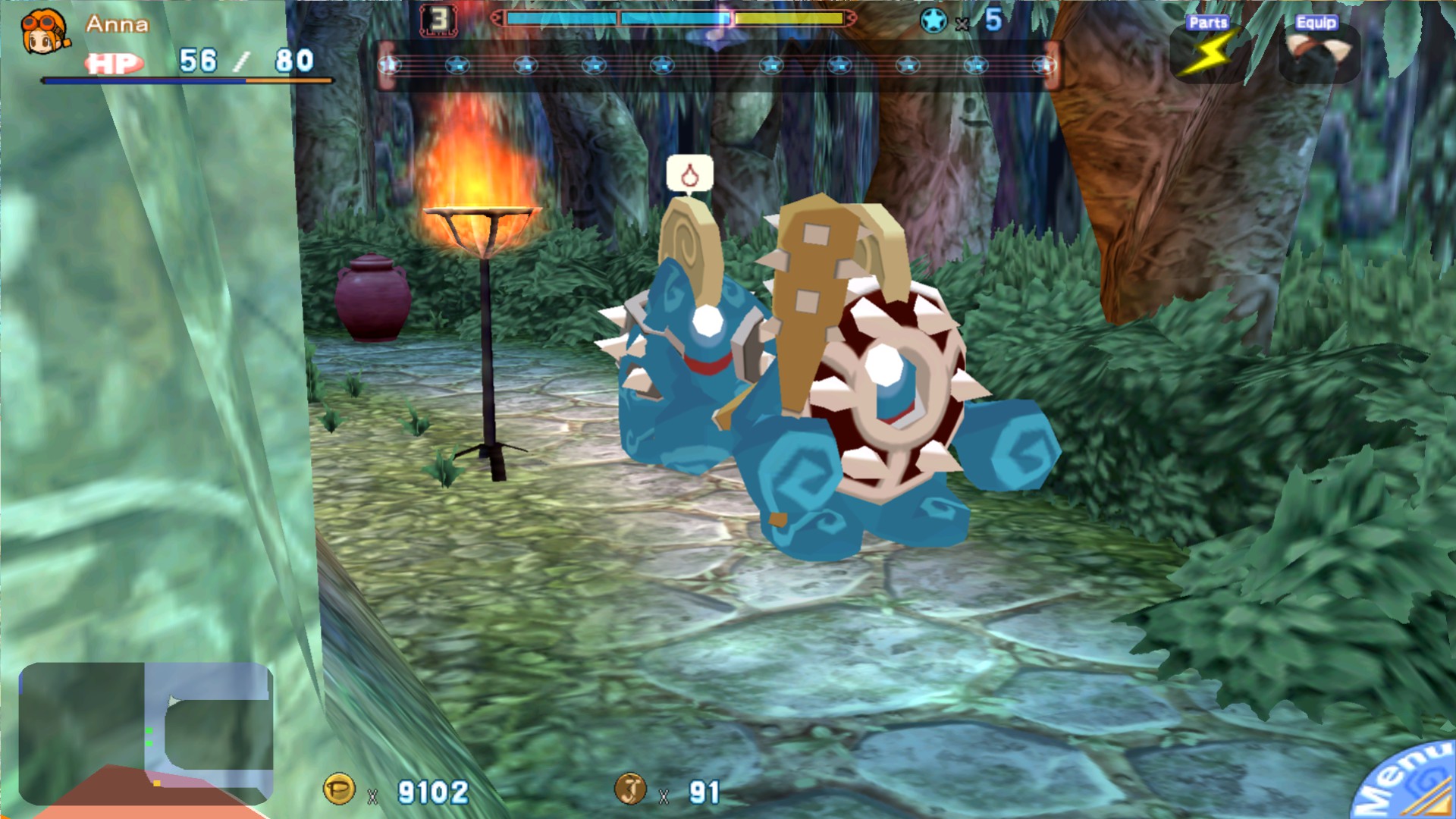 Gurumin prides itself in being incredibly adorable. The character models are simplistic but colorful and expressive. The monsters are an oddball group, consisting of a French blob with a monocle, mustache and a particular taste for the pretentious; a funky breakdancing ghost; and a gigantic Totoro-like cat with an impossibly deep voice. The phantoms, with their singular wide eyes, goofy smiles and overtly ordinate headgear, are similarly cute, despite technically being bad guys. Sometimes you can find them just frolicking around the stages, harmlessly, unless you want to be a jerk and ruin their fun by attacking. The bosses are just as amusing, if mostly because they can be found just hanging around, chilling, in various areas after you beat them. One of them is named Bob, probably the least imposing name for a boss in any video game. The soundtrack is atypical of Falcom’s typical synth-rock, with cutesier that are more appropriate to the game’s inherent silliness.

Parin, too, is a charming heroine. The town is apparently bigger than you can actually explore, but Parin won’t go there because she insists it looks boring. Look at a trash can, and she concedes that she has an irrational urge to destroy it. Hit the pause button and a little balloon that says “Wait up!” pops up above her. She speaks in a humorously flat tone, even when excited or exasperated. The interactions with the adults are prove for some amusing dialogue, except for a miner who repeteadly asking Parin out on dates. While she rejects him and acts appropriately disgusted, it’s still more creepy than funny. 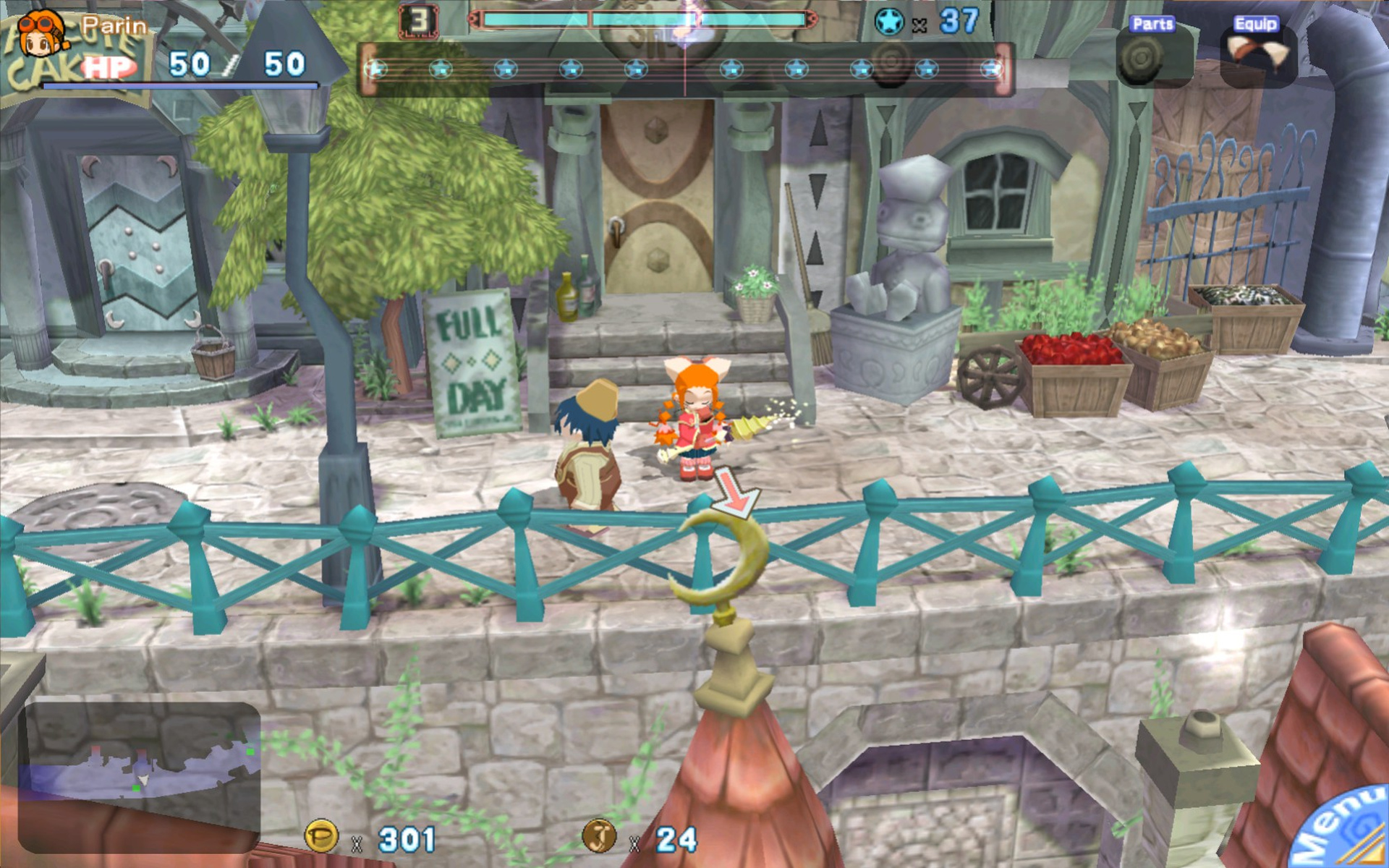 Gurumin was Falcom’s first truly 3D title, and it shows. The camera must be manually controlled, and while it works okay most of the time during stages, it becomes incredibly lost during boss battles. Moreover, the framerate is locked at 30 FPS, regardless of the power of your PC, if you’re playing the original computer version. Still, compared to the PS1/N64 console titles it most closely resembles, it’s much better looking by a substantial margin, an advantage of having been developed for the PC.

However, Parin controls extremely well, with incredibly fluid animation that bring a real spring to her steps. When it comes to combat, she’s not quite as graceful her drill attacks are short ranged, and it’s often easy to get caught up on combos that take too long to finish. It’s not quite to the level of Falcom’s other action-RPGs like the Ys games, but it’s functional and it’s not really the main focus of the game anyway. 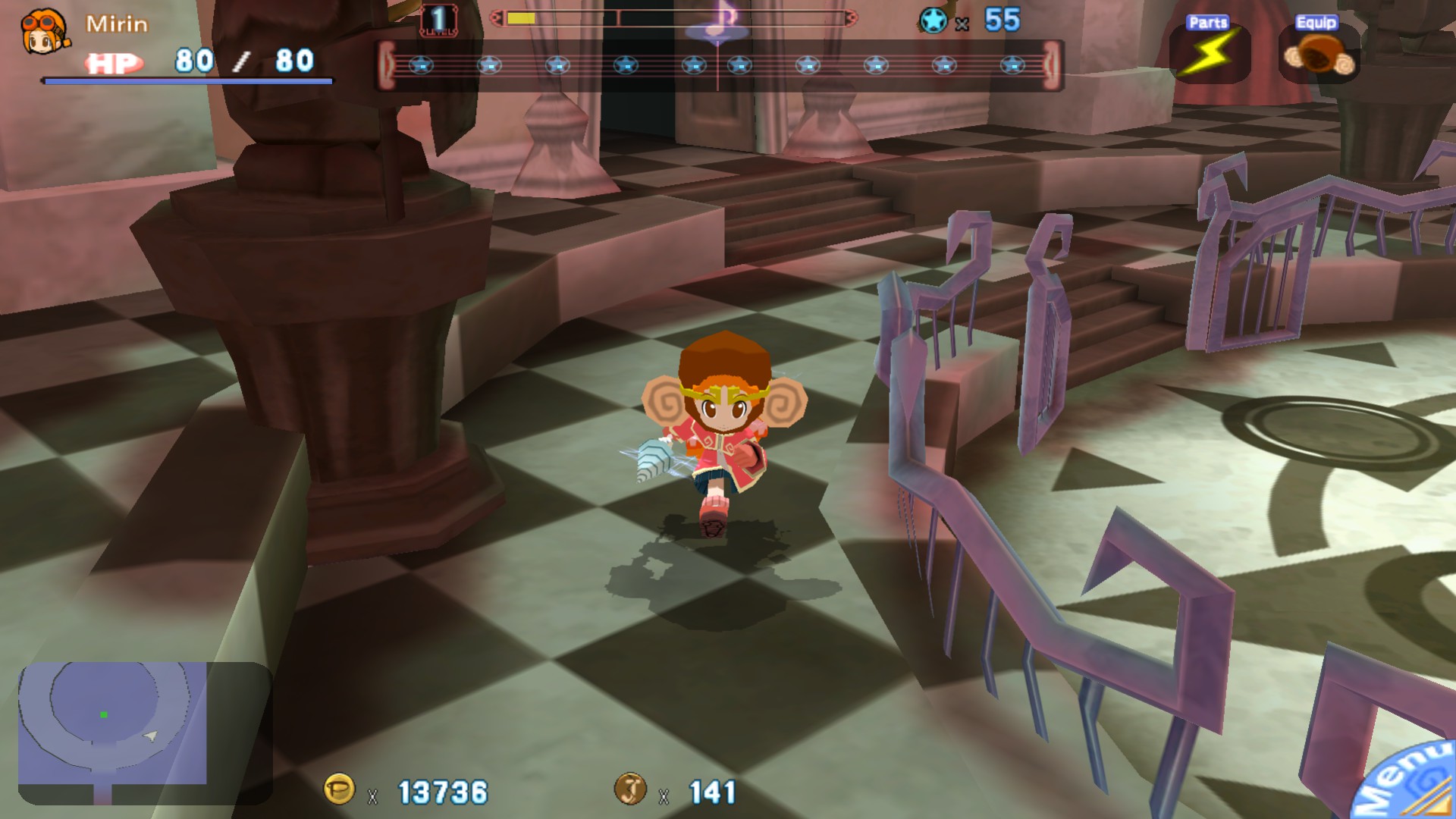 The quality of the level design is mixed, though. The Potato Ruins area, which opens the game, is visually dull in spite of its cute name, boxily constructed with ninety degree angles which make it feel like a 3D game from 1996 instead of 2004. Later stages show more variety, at least, even they are standard fantasy game locales like caves, forests and mountains. The exception to this is the Eggplant Caverns, a bioluminescent cave filled with glowing walls and odd creatures that look like living, walking computer chips. Otherwise, the sterile landscapes rarely compliment the colorful character designs, which is really Gurumin‘s only true weakpoint.

There are some other minor issues too. Parin moves a little slowly too, as the game could’ve used a proper run button instead of the short dashes. Plus the fact that you need to destroy everything, including all of the random pots scattered about, in order to get the best ranking, is sure to drive completionists nuts, because it makes this aspect more tedious than it should be. Certain areas also require solving puzzles to enter, which straddle the line between being simple and annoying.

Compared to Falcom’s other action-RPGs, Gurumin is a little on the simple side, and while there are higher difficulty levels, they don’t do much other than making enemies stronger – the core game is still pretty straightforward. It is dated in some respects, but Parin is such a great character, and all of the monsters and phantoms so weirdly likable, with tons of silly dialogue, that it’s a ton of fun to spend time in their world. 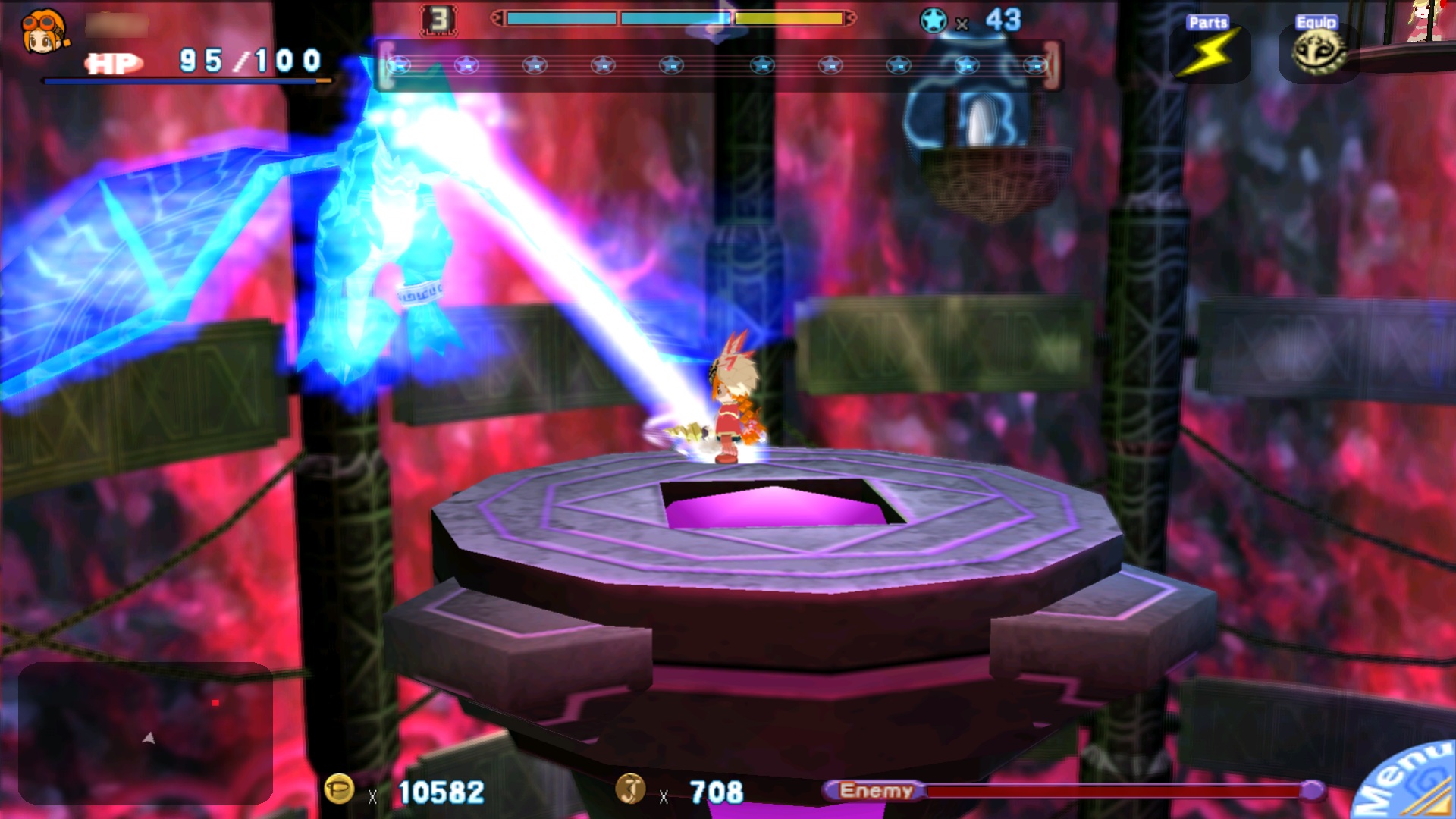 While initially released on the PC, Gurumin was ported in the PSP in 2007, adding the subtitle “A Monstrous Adventure” to the English release. Despite the lower resolution, the visuals make the transfer relatively well, despite some noticeably lower quality textures and degraded shadows. Most of the animation during gameplay also runs at a lower framerate than the action, which makes movement look (though not feel) a little choppier. In order to fit the widescreen aspect ratio, the top and bottom of the screens are cut off, rather than zooming out the action, which not only feels cramped but makes the camera issues during boss fights even worse. The GUI has been substantially simplified, including the deletion of the mini-map and rhythm meter – you still gain critical hits if you match the music, you just don’t get a visual indication anymore. A handful of new costumes have been added too, like a Santa Claus outfit. The PSP version localized into English in 2008 by Mastiff Games. The voice acting is generally decent and captures most of the goofiness of the original – Amber Hood does a great job as Parin – though Japanese voices can be activated with a code.

Mastiff then localized the PC version using their script from the PSP version in 2015. It includes some extra technical improvements, allowing higher and widescreen resolutions and support for modern controllers, so you can map the camera controls to a second analog stick instead of the default shoulder triggers. This version only has English voices, but the original Japanese voices can be modded back in. Mastiff then commissioned and published a port of Gurumin to the 3DS, released in 2016 as a digital download. It looks similar to the PSP version, though it includes slightly improved camera controls and added 3D effects. It runs slightly better on the New 3DS, which also allows camera control with the C stick, and it has the extra costumes from the PSP port.

In 2005, Korean studio MIDAS Entertainment commissioned Gurumin Online, a multiplayer game based on Gurumin. Little information is available on this, as it went offline in 2008.