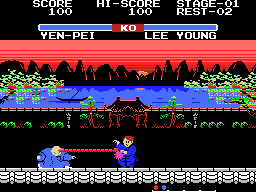 It didn’t even take a year for Konami to come up with a sequel. Yie Ar Kung-Fu 2: The Emperor Yie-Gah picks up from the first MSX game, but mixes things up even further. The hero this time is called Lee Young, presumably the son of the former game’s Lee and shamelessly traced from a photo of Bruce Lee for the cover. Before fighting the actual opponents, the player now has to get through three screens of flying kung fu babies, which are mostly there to land two or three cheap hits at the player. There are eight stages this time, and while some characters vaguely resemble previous ones, their designs have gone absolutely crazy this time. Yen-Pei, for example, roughly corresponds to Chain/Chen from the first game, but uses his long hair to attack instead of a metal chain. Po-Chin stuns Lee Young with his farts, and Wen-Hu throws a magical flying mask – there isn’t a single opponent that doesn’t have some kind of ranged attack.

During boss battles, a bowl of soup might appear randomly to make the hero invincible for a short time, which is nothing short of an instant-win card in the first five stages. Afterwards, it just lifts the instant-lose spell from the player, when the game shows its true face as a mean-spirited death trap to humble even those who have mastered the first game. All the later enemies are stronger and faster than Lee, most notoriously the bomb-throwing thief Han-Chen and “Ming the Merciless” Li-Jen, who fills the whole screen with lightning and is frankly invincible.

As a faint gesture of goodwill, the game features one of the most innovative hidden extras: When playing on an computer with two cartridge slots and the first MSX game inserted in slot 2, the old Lee shows up occasionally after the first two stages, to save his son from near death situations.

A neat easter egg can’t conceal the fact that The Emperor Yie-Gah is not a very pleasant game, though. The controls are a minor catastrophe – Lee Young can only jump straight up, as pressing up and forward executes a high kick, and the hit detection is once again all over the place. It’s like playing Yie Ar Kung-Fu with mittens on, and Lee Young ist just some ordinary dude against an army of super heroes.

Yie Ar Kung-Fu 2 is the first in the series to introduce a vs. mode for two players, although it appears tacked-on and unbalanced: While Player 1 is stuck with Lee Young, Player 2 gets to chose from three of the enemy characters: The aforementioned Yen-Pei and Po-Chin, and a fan-throwing lady called Lan-Fang.

It appears Europe was already starving for a sequel to the arcade game, as Imagine just took this one and ported it to their usual range of home computers, which also come with the same terrible controls, and each with its own usual platform-specific issues: The Amstrad CPC and ZX Spectrum have no in-game music (except for the hectic low-health music on Amstrad), and the Speccy has messed up AI that easily allows Lee to destroy some of the bosses without much of an effort. New is a version for the obscure French machine Thomson TO7, which is about on par with the ZX Spectrum version, although Po-Chin is missing here. Following the first game, Yie Ar Kung-Fu 2 appeared on Konami Antiques: MSX Collection Volume 2 for PlayStation and Saturn. 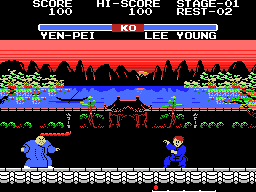 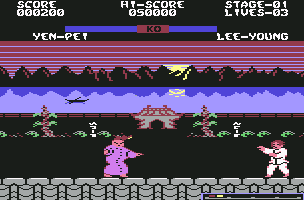 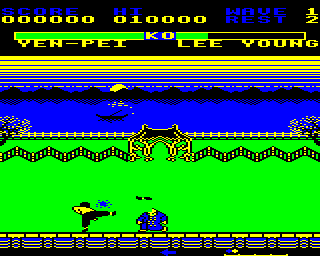 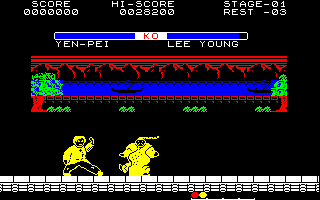 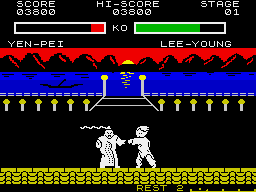 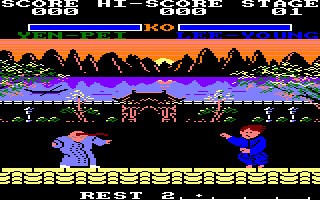 Even though the series ended the same year it began (not accounting for some later released ports), several unconfirmed sources on the web claim that the 1993 Konami fighting game Martial Champion was originally introduced as Yie Ar Kung-Fu 2. Released during the Street Fighter II mania, it plays somewhat closer to the modern fighting game formula, although it’s not a simple clone: It’s three buttons stand for upper, middle and lower attacks, similar to the later Kakuto Chojin. Some of the characters also have weapons that can be knocked off and picked up by the opponent (who then never actually uses them). It featured some huge sprites for its time, but suffered from terrible controls and an AI that encourages only a very narrow range of tactics. Martial Masters was ported to the PC Engine CD in Japan. The home version has much smaller sprites, but thanks to improved controls, additional modes and characters that actually use the weapons they pick up, it is actually a fairly decent game. Even if the rumors are true, though, it’s easy to see why Konami opted out of making this a Yie Ar Kung-Fu sequel: Only two or three of the ten playable characters even qualify as “kung fu” fighters. 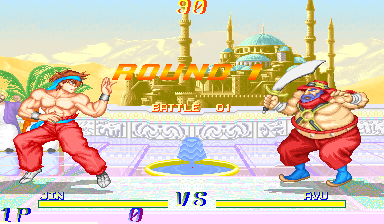 Konami’s Parodius series has a long tradition of making fun of the company’s own titles, from Goemon to Castlevania. Yie Ar Kung-Fu finally got its due in one of the last titles in the series, Sexy Parodius. The game has a whole stage and music dedicated to the kung fu theme, and Oolong even appears in person.

Somewhat in the spirit of Parodius, Konami published the weird Game Boy Advance game Pyuu to Fuku! Jaguar Byuu to Deru! Megane-kun, based on an even weirder manga series by Kyosuke Usuta. In all kinds of 2D action stages with alternating perspectives and several mini games, it references dozens of famous game classics, not limited to those made by Konami. In one stage, the hero of the game gets transported into an 8-bit world, which includes sections inspired by Sokoban and The Legend of Zelda, among other titles. At the end of this part of the game, one gets to play a whole round of the NES Yie Ar Kung-Fu. Only the five opponents are replaced with weirdos like a Japanese gangster with an enormous flat top haircut, or a big fat guy in a schoolgirl skirt. The scroll that showed the Chinese characters for “kung fu” in the original, now reads “strange flute.”

Finally, the Sumo Digital-developed New International Track & Field for NDS has a playable character named Oolong, but in that game he’s a ancient martial artist whose biography declares him roughly 1000 years old. 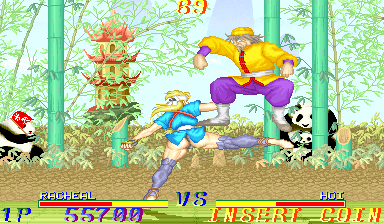 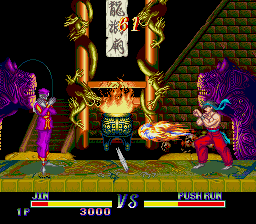 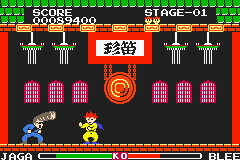 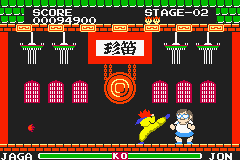 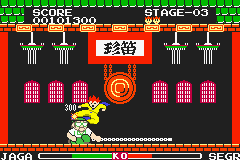 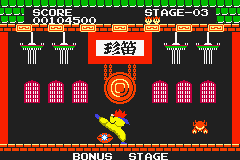 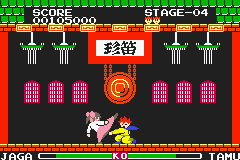 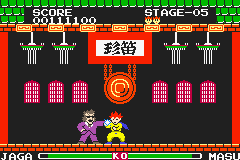