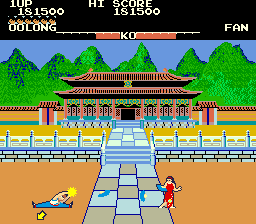 Among the big traditional arcade game manufacturers in Japan, nearly everyone has their own famous long-running fighting game series. Capcom’s Street Fighter, SNK’s King of Fighters, Sega’s Virtua Fighter and Namco’s Tekken all used to be important status symbols and moneymaking machines in the 1990s. All Konami ever sent into competition, however, was a handful of quickly forgotten one-offs like Dragoon Might, Deadly Arts, Rakuga Kids or Teenage Mutant Ninja Turtles: Tournament Fighters. Yet a long time ago, Konami beat all these competitors to the punch with Yie Ar Kung-Fu.

The most popular fighting game of the 1980s plays very differently from what one has come to expect from a fighting game nowadays. Next to the directional joystick lie only two buttons, for punches and kicks, respectively. But protagonist Oolong (yes, like the tea) still knows all kinds of fancy martial arts tricks. Moves are executed by holding the joystick in any of the eight directions while pressing a button, allowing him to execute 16 different maneuvers. They only got one frame of animation each, but stringed together fluently by a skilled player, they can form impressive katas. Every attack is rewarded with a different amount of points when it connects. While Yie Ar Kung-Fu doesn’t have combo system like modern games in the genre, contestants are stunned very briefly when hit, leaving them open for an adequate follow-up attack. Oolong is much more likely to find himself at the receiving end of such rapid beatings, though, as the game is very specific about how he has to hit enemies for his blows to count, and not all directions for the moves seem particularly intuitive. Oolong’s defensive abilities are lacking, though: Holding the joystick up and backwards makes him look like he’s trying to block, but it doesn’t do him any good at all. His only means to evade attacks and get around the arena quickly is to jump around like a frog. 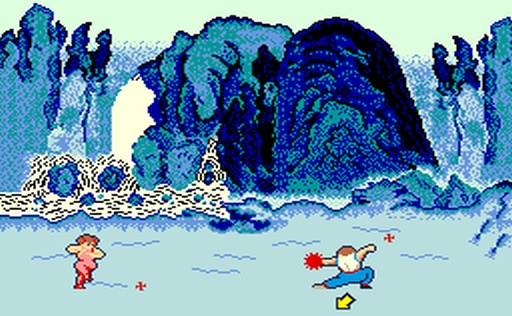 While Yie Ar Kung-Fu‘s mechanics owe a fair share to Karate Champ, the original 1-on-1 fighting game by Data East, its innovations lie in a different field: Generic Karate Guy 1 and Generic Karate Guy 2 were the stars of almost every fighting game at the time, but Yie Ar Kung-Fu features a colorful cast of characters that look like it was ripped straight from a boisterous 1970s Hong Kong flick, each of them with individual characteristics and abilities. The duels are accompanied by the most stereotypical tunes of “Chinese music” one could imagine. The player always plays the role of Oolong, who is out for revenge after his father has been killed by the tournament champion in the final battle. Character select screens were still a thing of the future, matches for two human players the privilege of Generic Karate Guys in other games.

The opponents are grouped into two tiers: In the “Hot Fighting History,” Oolong challenges the first five in front of a picturesque waterfall. After beating them, he gets promoted to “Masterhand History,” where six more, harder enemies await at a Buddhist temple. Few of them are inclined to a fair hand-to-hand fight; most are in fact simply named after their weapons. So Pole annoys players by using his stick to block most blows, Chain can attack even from the far side of the screen, and Club is only vulnerable by hitting low or pre-empting his strikes, thanks to the shield he’s holding up constantly. Star and Fan, who co-star as the first female fighting game characters ever, rely on throwing countless projectiles at Oolong, which he can fortunately intercept with well-placed counterattacks. Unusually for a classic fighting game, there is no formal bonus round, although Feedle kind of fills that void when he storms at the player in form of an army of clones, all of which go down in one hit.

Like most fighting games that predate intricate combo systems, Yie Ar Kung-Fu is all about using the best strategy to fool each opponent’s AI, rather than mad skills with the controller. Due to its rapid pace, the latter is still required, but a fight becomes much easier as soon as the opponent’s weakness is learned. The last foe, however, shows some serious SNK boss syndrome, and that at a time when Shin Nihon Kikaku was still all about mediocre 2D shooters. Blues (Bruce?) doesn’t even need a weapon, for he can combo Oolong’s sorry ass to the ground within seconds, just using his incredibly swift legs.

While the gameplay of Yie Ar Kung-Fu have been left behind by Street Fighter and its many followers, the template it had laid out for the look and feel was there to stay with Japanese fighting games for many years to come. When playing Yie Ar Kung-Fu, one can see why Billy Kane from Fatal Fury can bring his annoying stick to every tournament without being disqualified, fight the first shirtless fat guy that attacks by flying head first – obviously inspiring E. Honda from Street Fighter II – and even meet a fan-throwing woman in a sexy red dress, which makes the design of SNK’s Mai Shiranui seem hardly coincidental. A perfect round is also rewarded here, with a voice sample that says “xie xie” (Chinese for “thanks”). 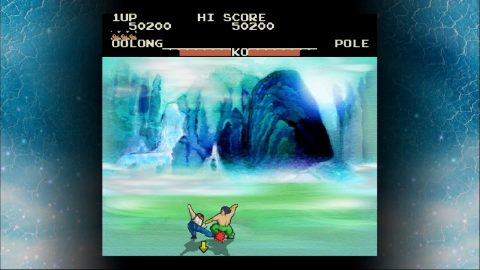 Yie Ar Kung-Fu also made a big splash in the rest of the world. Ports of the arcade game made it to all the important 8-bit computers in Europe, courtesy of Imagine: There were versions for Commodore 64, ZX Spectrum, Amstrad CPC, and BBC Micro. Of course all of them had to make more or less severe cutbacks in graphics and controls, as they only supported 1-button joysticks. Each version also leave out different enemies: The ZX Spectrum lacks Chain, while both him and Fan are omitted in the Amstrad version. The Acorn Electron and BBC Micro versions – which are mostly identical, save for an extended palette with the Micro – come without Club and Tonfun. Feedle is sacrificed in all of them, although Electron/BBC Micro name their exclusive bonus rounds after him, which have him throwing stuff at Oolong from off screen instead of cloning himself. Some, especially the Spectrum and Electron/BBC versions, are barely playable. As usual, the Speccy also plays no music. The C64 version is the best of the bunch, but it replaces the cartoon style of the original with a more realistic look. There’s also a stripped-down variant for the C16 (Plus/4 in Europe), which uses the same sprites as the C64, but has lower quality backgrounds, no music and off controls.

More faithful were later conversions on compilations like Konami Arcade Classics for the PSOne and Konami Classic Series: Arcade Hits for the DS, as well as Oretachi Game Center Zoku: Yie Ar Kung-Fu for the PlayStation 2. These differ from the arcade game only in details like the interface and screen resolution. The DS version tries to conceal its lower resolution with some really weird half-interlacing, though, which makes it look hideous on screenshots. The second screen is used to display the original arcade instructions leaflet. 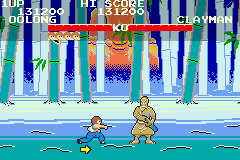 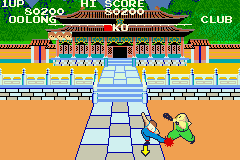 But the most interesting is the Game Boy Advance port on Konami Collector’s Series: Arcade Advanced, which looks almost like the original, making up for the lower screen resolution with a transparent HUD. It features an exclusive new background and two hidden characters, which can be unlocked with the classic Konami Code. Bishoo seems like she’s modeled after a knife-throwing opponent from the MSX sequel, while Clayman is a giant made out of just that – clay. The game has also been made much easier by expanding the opponents’ hit zones. The true highlight on the GBA, however, is the system link versus mode, where players finally get to take control of all the other characters.

Yie Ar Kung-Fu was also released on Xbox Live Arcade in 2007. This new version lacks the GBA improvements, but comes with redrawn backgrounds, touched-up hi-res sprites and remixed music. At the same time it also allows switching back to the arcade original. One year later, the game made it to mobile devices. The download isn’t available anymore, but according to a contemporary review, the AI in this version was completely ruined anyway.

Since conversions to 8-bit consoles couldn’t ever hope to compete with their arcade counterparts, Japanese developers made a habit of completely reinventing their games with the home versions. Yie Ar Kung-Fu on the Famicom didn’t deviate as much as Konami’s own Goemon or Tecmo’s Ninja Gaiden did later, after all it was still in the same genre, but it is still a very different game. The hero here is called Lee, and the list of his opponents is down to five, which are more or less based on characters from the arcade game, with the focus on the shirtless big bald guys. Completely new is only Tao, who spits fireballs. All the battles take place inside a dojo, and after all five enemies are beaten, the game just loops with higher difficulty (as did the arcade game) and different dojo colors. There’s now also a bonus stage where various projectiles come flying at different speeds, and Lee has to knock them out of the air to gain bonus points.

The controls have been simplified a lot. Lee only knows two different punches and four kicks. While jump attacks in the arcade were separate moves from the “normal” jumping, it is now possible to kick at any given time while in the air (but only once per jump). Lee also bounces of walls when jumping against them, to this day a common trait of particularly agile characters in fighting games (Chun Li, Mai Shiranui, etc.). This stripped-down moveset makes it much easier to find out the weaknesses of each opponent. What doesn’t make the job any easier is the even worse hit detection.

The home variation of Yie Ar Kung-Fu also made it onto MSX (1) computers, but the 1-button layout makes the controls much more cumbersome than they need to be. It also lacks the wall bouncing, and Lee can only jump forward. It looks very similar to the Famicom version, but for some reason Lang was changed to look like a child. The MSX version also appears emulated on Konami Antiques: MSX Collection Volume 1 for PlayStation and Saturn. 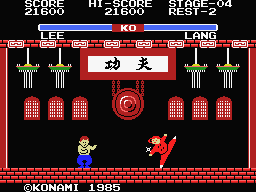 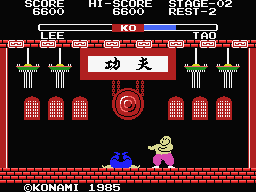 A Game Boy port that was made more than a decade later plays closer to the Famicom game. This was only released as part of the Konami GB Collection packs. In Japan this was a regular monochrome cartridge, but it supported the enhanced palette options of the Super Game Boy for the energy bar and to cycle the Dojo colors, finally getting rid of the depressing black background. In the West, the whole compilation was upgraded to support the Game Boy Color, but it only uses one palette for the entire game. Other than the original, the Game Boy versions even have a proper ending where a supersized Lee kicks down the entire building. There was also a very early mobile phone port in 2001, but only in Japan. 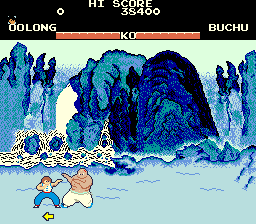 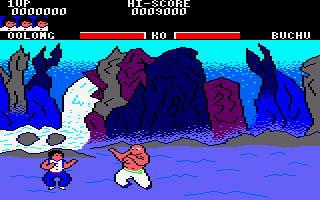 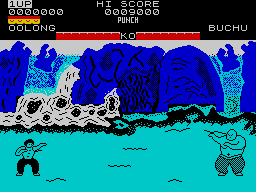 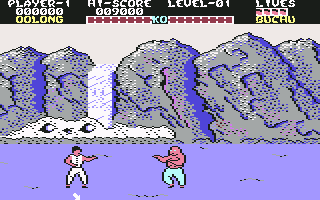 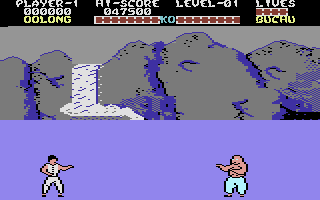 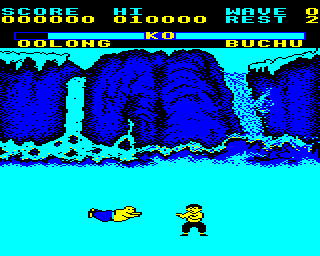 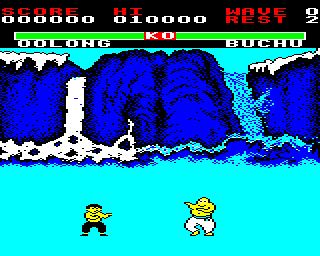 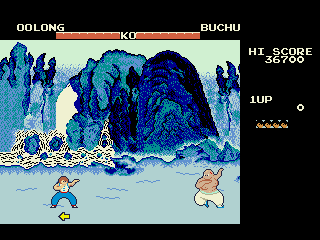 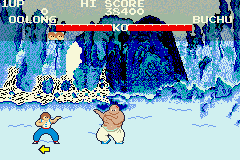 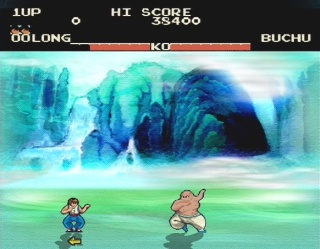 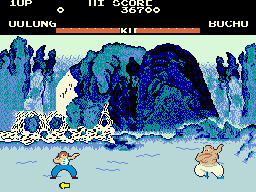 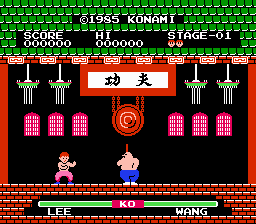 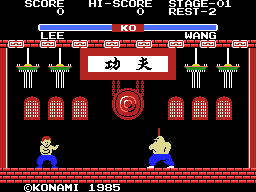 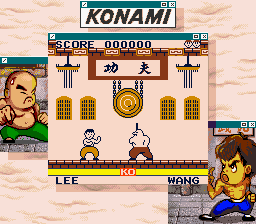