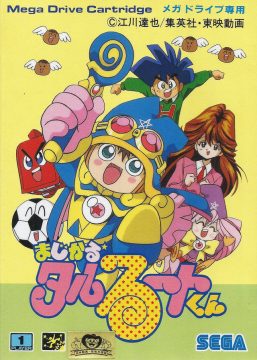 Magical Taluluto-kun was a manga first published in Weekly Shounen Jump starting in 1988 and running until 1992. With a premise not unlike The Fairly OddParents, the story centers around Honmaru Edojo, a naughty-but-good spirited schoolboy who’s a bit of a loser that constantly gets picked on by bullies and can never grab the attention of any girl. That is until he stumbles upon a magic book that was with a collection of children’s novels his father wrote. Out sprung Taluluto, a self-proclaimed great magician that can grant any wish Honmaru asks. Naturally mistakes and mishaps occur from Taluluto’s magic as fantastical happenings begin to occur within Honmaru’s once-normal life. It was popular enough to have an anime by Toei that ran for two years beginning in 1990 and spawned three movies in total, along with a handful of video games. 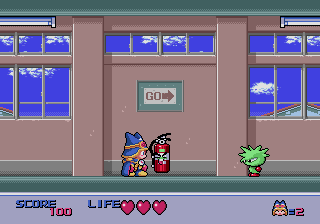 Fortunately, a good game doesn’t require info of the source material to be playable. In fact, the racier themes brought upon by Honmaru’s lecherousness is abandoned to make things more G-rated than the manga and anime it’s based on. Players control the runty mage Taluluto through five levels, meeting characters from the series along with battling various villians. His primary weapon of choice is swinging his magic rod, but its short range is equal to that of the Wonder Boy in Monster World. The better option, if available, is to magically grab various objects with a rod swing and fling them at enemies. These makeshift projectiles range from backpacks to tree stumps to even streetlight poles, and each one you wield becomes personified with a goofy smiling face thanks to Taluluto’s magic. Taluluto can also flap his bat wings to glide, which is also helpful to slide through narrow passages. His magical prowless also extends to a few special abilities with limited stock, starting with temporary invincibility but later gaining screen-clearing sword strikes and sending Taluluto’s sister Kinakamo Ria to do some damage. Ultimately, Taluluto will face down his evil rival Raivar in order to save Honmaru’s love interest Iyona Kawai.

The presentation is bright, almost to the point of being pastel. Aside from color choices, the graphics aren’t too far removed from the first Genesis Wonder Boy, though many of the sprites are quite huge with everything in large scale to match Taluluto’s diminutive stature. There’s ton of parallax layers used and screen-ripping effects for a few magic attacks. Stages flip from normal real world settings like a school and a neighborhood to the mystical places Taluluto frequents. These magic worlds seep with castles, mushrooms, living trees, and smiling clouds and mountains. Majority of the time, the enemies and locales are quite cutesy and silly, matching the player’s childish demeanor. However, a few bosses like the helicopter and giant demon fight almost seem out of place. The musical score performed by Matsuda matches the theme with very peppy pop beats, leaving you grinning like the clouds. Taluluto has a scant few spoken words in the game, a few “Ooh”s and “Aah”s with a smattering of garbled low-bit words when using a spell or nibbling on his favorite food takoyaki. 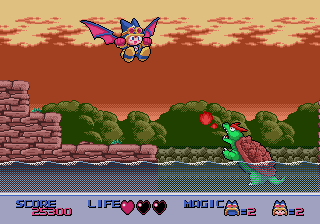 Magical Taluluto-kun is a brief cakewalk, though. While his normal wand swing has a short reach and his health never rises over the 3-heart limit, the enemies are huge targets and projectiles Taluluto can magically pluck from the stage are plentiful, able to bulldoze everything on screen with one toss. The pink flying baddies that carry the takoyaki health pickups are everywhere, and numerous item bags are strewn about to offer up 1ups, life-replenishing jam jars, or magic charges, along with serving as a free projectile as well. Secrets are scarce and puzzle elements few and far between, usually only needing a gliding slide to wedge through a narrow passage, a few blocks that need a wand strike to become temporary stair steps, and an easy maze with obvious arrows pointing the right direction. Your invincibility magic is the only spell worth spending charges on, and makes the bosses a cinch to defeat while you’re free to magically grab the “please hit me with this” object to hurl back at them. The only threats Taluluto really faces are the bottomless pits. These killer pits litter many long jumps that require precision his bat glide cannot give. A double tap of the jump button leaves Taluluto in an uncontrollable glide that most likely will careen him into enemies or right down into pits. The worst section is the auto-scrolling sky segment where the player must hop from happy cloud to happy cloud while leaping and avoiding apple-throwing monkeys and giraffe necks. The game only offers three continues, but with the game so short and easy enough, that’s plenty.

It’s obvious that this licensed title was meant as a beginner’s platformer for the younger Japanese crowd who were fans of the kids’ show and manga. While that doesn’t discredit the game outright, the short and breezy playthough if offers will leave older fans wanting more. Fortunately, the game itself is built solid enough with only a few irritating quirks and moments that places it as an above-average affair, a lucky position that many anime-based or licensed IP games of the era wished they could reach.