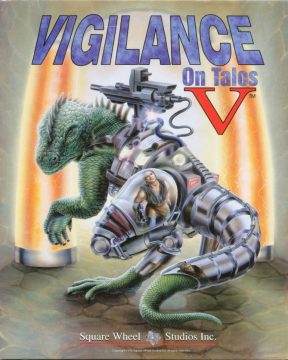 Vigilance on Talos V is a bit of an oddity, being a Super Metroid clone released for IBM PC DOS machines. What makes Talos especially interesting is that it’s a Super Metroid clone. Not a so-called Metroidvania, but a straight up replica of Super Metroid. So much so that a casual glance at it playing on a computer might make you think it’s actually ZSNES running a graphics hack of the original. Having said that though, it does do a few things to differentiate itself, while also being an excellent homage to what is arguably one of the greatest video games of all time. 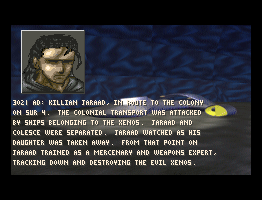 The opening story (and unfortunately the ending too) is brief, told only through two voiced screens of text, but it sets the grim sci-fi tone nicely. The year is 3021 AD, and Killian Jaraad is travelling to the colony on the planet Sur 4. The colonial transport is attacked by the Xenos, and Jaraad is separated from his daughter Colesce, who is taken away to be a slave. From here Jaraad trains as a mercenary, hunting down the Xenos. Three years later Jaraad receives a tip from another mercenary, known as E. Red, who explains the Xenos are holding their human slaves on the planet Talos V. Hoping that Colesce might be among them, Jaraad heads for Talos V. And so the scene is set for three sprawling worlds which mimic the Super Metroid design template.

Describing the game in details is difficult, given how similar it is to Super Metroid. One of the first items you discover is the Saturn Ball, which allows you to shrink down much the Morph Ball and roll through tight passages. One slight difference is that you’re able to jump immediately, without need to first find the Spring Ball add-on. Next you find bombs which allow you to destroy secret holes in walls, of which there are plenty. Afterwards you acquire missiles, needed for tougher enemies and opening special doors – all of which, by the way, look and operate identically, even down to the whole screen going black and shifting mechanic. Further items include Jump Boots for higher jumping, an X-Ray Beam for scanning the walls for secret passages, and a Grappel Hook for swinging from special blocks. The difference here is that when you swing, you do so while in Saturn Ball form. Plus there are extra energy tanks to collect, each one holding 99 units of energy. The best thing is that most of these items are given to you via a statue which has a striking familiarity about it.

There are other similarities. Unusual for a computer game is that you save in special saving archways, which also recharge your current energy tank. Further energy top-ups can be had from enemies, and there are even “enemy spawners” which cause tiny flying enemies to come out of the ground and fly at you. Many elements, such as the long elevator shafts and pools of acid, can admittedly be found in plenty of other games, but the way they’re portrayed here you can’t deny what their influence was. Several background designs and enemy types are also reminiscent of Nintendo’s classic. In fact the final boss is almost an exact replica of Doraygon from Meridia, albeit looking exactly like Kraid from Brinstar. He even grabs you in a similar fashion to Doraygon. 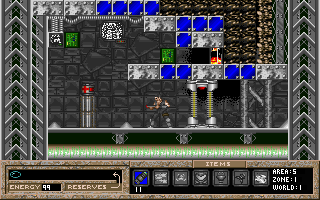 As mentioned though it does bring some new ideas too. There are teleporters which give the world a much bigger feel, albeit at the cost of a singular cohesive structure. There are several functionally interesting aspects to the environment. At one point there’s a spawning bubble which carries you across a chasm – it’s never used other than in specific instance, but it’s interesting. There are also vines you can grab and slide down or, if you hold the jump button, continuously leap up from, allowing to scale large heights. Not as much fun are the enormous rotating arms made from spiked balls, which act as traps in some areas. Although they do very little damage, they do knock you back and can prove infuriating in places, especially when you’re desperately trying to avoid enemies and use the Grapple Hook to traverse a large area. One misstep and you fall below, forcing you to redo an entire section. Generally though the levels are structured in an enjoyable way which recreates a fair amount of the magic of exploration in Super Metroid. The music is also entirely different, eschewing ambient sounds in favor of something more tuneful.

The biggest shift though is that you lose all of your items between each of the three worlds. In effect this makes Vigilance on Talos V akin to three, very small Super Metroids crammed into a single game. Which isn’t a criticism, since the best part of the Metroid series has always been item acquisition. Each world is only about an hour or so long, giving proceedings a much faster, more arcadey pace. There’s still a focus on exploration though, with every stage containing some fiendishly placed secret passages for use with the Saturn Ball. In fact in the first level you can only reach the final boss by rolling into a deadly pool of acid and bombing the floor for a secret passage.

Which also leads us on to the criticisms. The game is extremely short and seems to end abruptly after the third world boss. The ending hints that there’s more to do, but the main protagonist refuses and then it’s over. It says he rescued his daughter, but you don’t even see this. The game almost feels unfinished, especially when you consider that the third weapon in your inventory is never made available, and some items such as the flamethrower are only accessible right at the end for the final boss. The impression is that the team had a looming deadline and had to complete it quickly.

Rushing to finish would explain some other things. The collision detection is at times dodgy. Nothing game-breaking, but it’s possible to clip through walls using the grapple hook and some things don’t work quite as smoothly as you’d expect on a console release. You also can’t fire at an angle or even straight upwards. For some this could be a deal breaker, and certainly it’s annoying in places. The game does try to compensate though, mainly by (usually) avoiding situations where you’d specifically need to fire upwards, and also by giving you an item which grants infinite homing missiles. Even so, there are times in the final area where you’d really like to crouch to shoot the egg-pods spawning tiny flying creatures.

In spite of these criticisms, none of them prevent you from playing or completing the game and, given its short length of around three hours, all of the idiosyncrasies lend Vigilance on Talos V a certain charm. It’s a remixed version of an old favorite. Without doubt this is Super Metroid, just not the version Nintendo would ever allow you to see. It copies the Japanese console design template but infuses it with that distinctive style you find in old DOS games. It’s a warped marriage that creates something both instantly recognizable and yet genuinely unique.

There’s a very good chance that all the DOS versions floating around online are the result of HG101’s own copy editor, Jorpho. As he explains:

“As you may know, I did a lot of work on the old Home of the Underdogs, and I would never have given the game a second thought had it not been on Ms. Underdogs’ old Most Wanted list. When I stumbled upon it I did not immediately dismiss it as shovelware. You may be aware that the DOS version of the game was published by an outfit known as Square Wheel Studios, headquartered in St. Laruent, Quebec. I think after they went out of business all their old stock got sold to a computer liquidator there named 123 Compute, or maybe the same people behind the studio just went into the computer liquidation business afterwards. At any rate, wandering through Verdun one day, that’s where I found what may very well have been the last sealed boxed copy of the game in existence. After making the relevant scans and copies I eventually shipped it off to Thailand for Ms. Underdogs’ personal collection. Oddly, when placed on the site, she incorrectly listed the publisher as PolyEx; as I understand it, they were only responsible for the OS/2 version (and good luck finding that!).”

Given the rarity of the game and any material relating to it, we’re also providing the manual scans in a ZIP file.

Although not tested, screenshots imply that the OS/2 release is identical to the DOS version.