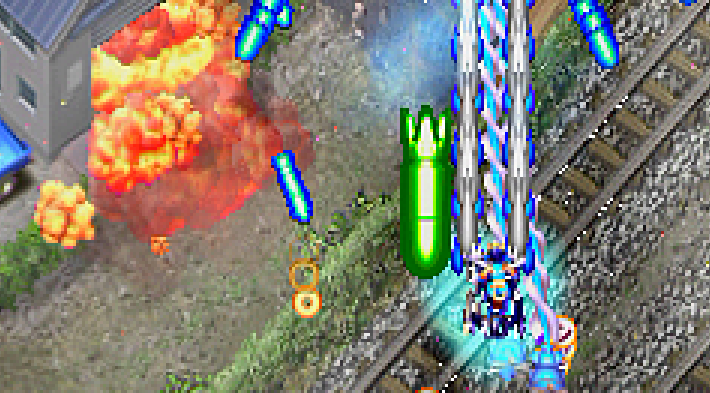 These are the words that appear (in Japanese, of course) on an advertisement for Muchi Muchi Pork!, a 2007 shooter from Cave. Japan has long ago introduced the “cat girl” to the rest of the girl, so it seems logical that other animal-human conglomerations should exist – this game here stars “pig girls”, with are characterized by pink ears and a chunky physique. The enemies are all various other animals dressed in military garb – Major Sirloin, Officer Lamb, the penultimate foe General Pork Fillet – and there’s a recurring theme of pork dishes, appearing literally in some menus, and as names of some of the characters. It is largely inexplicable – Deathsmiles had some precedence with its gothic lolita theme due to the popularity of the Touhou shooters, but even when viewed with the typical “LOL JAPAN” sentiment, this is pretty damned bizarre. 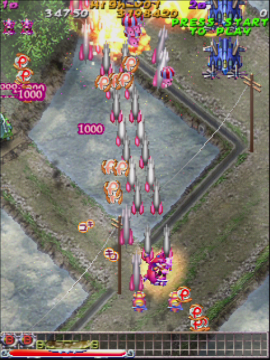 The story involves a trio of females from Butazuka City who have been transformed into pig-girls by the evil General Pork Fillet, who comes from the far away planet of Iberiko (a reference to the Iberian peninsula, where Spain is located, also known as a country so obsessed with pork products that it actually has a famous restaurant called “Museum of Ham“.) The pig-girls fly via bikes (called “ketta machines”, which derives from the word for bicycle in the Nagoyan dialect), which are powered by pedaling (to lose weight, one might surmise?). The characters are designed by Kazuhiko Kawasaki, who is well known for illustrating rather plump, cutesy women.

The “main” girl. She’s only 15 years old, apparently? Momo’s options stay in a set formation which increase in wideness as you power-up, and her Lard attack consists of two powerful, albeit relatively short-range, chainsaws. The “bara” part of her name is a reference to the word “butabaraniku”, which means “bacon”.

Ikuo’s options shadow her movement and fire out lasers which can lock on to enemies. Her Lard attack is a single concentrated long range laser. Her name is a kanji pun – it’s spelled “肩口 一久青”, while “肩ロース”, means “short loin”.

Rafute’s options circle around her ship, and her Lard is a yellow morning star which can lock on to enemies. As for the token pork reference, “Rafute” is an Okinawan pork dish. 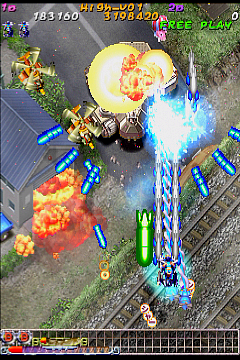 Of course, the theme is really only something to attract players to the game itself. Muchi Muchi Pork! was programmed by Shinobu Yagawa, who helmed a number of games for Raizing before moving over to Cave. His games, while still quality overhead shooters, have never quite meshed well with the rest of Cave’s library – his previous shooters, Ibara and Pink Sweets, were practically the fourth and fifth installments in the unofficial Yagawa Raizing shooter trilogy of Battle Garegga, Armed Police Batrider, and Battle Bakraid, and didn’t always mesh well with the likes of Dodonpachi, Espgaluda or Mushihime-sama. Muchi Muchi Pork!, however, is a much more comfortable blend of both development philosophies.

The scoring systems in Cave games typically rely on the interplay between two weapon types, usually a shot and a laser. In Muchi Muchi Pork!, one of your weapons is a standard rapid fire shot, upgraded by collecting P chips. (Presumably these stand for “Pork” rather than “Power”, considering your pig girl enthusiastically yells “Pork Up!” upon being upgraded.) The laser is known as a Lard Beam, which can drains the Lard Meter and can be replenished by picking up pigs. Pigs appear when enemies are shot, where they parachute to the ground, but other times they are innocently found grazing, waiting to be harvested.

Enemies destroyed by the Lard Beam will drop score medals, and here is where the influence from other Raizing games come in. With every batch of enemies you destroy in a single lard attack, the point value of the medals go up, from 100 all the way up to 10,000. If a medal falls off the screen, then the next batch will be at a tenth of the value. (Which is rather kind, considering in previous games, missing a medal would reset their value to the lowest.) Like many other Cave games, simply letting up on the Lard attack button will suck in the medals like a vacuum, which might presumably make things too easy. But other enemies will randomly drop medals which will not be automatically obtained (unless you fire your standard shot, fire a lard shot, then let go). Obviously, if you don’t pay attention, these errant medals can fall by the wayside and screw up the medal values.

Figuring out the best balance between the two weapons – how often and where to use the lard attack to build up medal values, and where to lay off so you can rebuild the lard meter – is the crux of the scoring system. It’s not without other quirks too – a lard meter is segmented and will always use up a set amount of power regardless how long you keep it active, so you can’t increase the value of the medals too quickly. And if either one of your weapons is fully powered up, then any errant P-chips or pigs will give a substantial amount of points too. Bombs actually call out a gigantic robot, which rampages forward and converts bullets to power-ups, in addition to providing temporary invulnerability. Like other Raizing games, bomb stock is replenished by grabbing “B” icons on the ground, which will grant you a full bomb when enough are obtained. There is also no visible hitbox, and bosses do not have life gauges, though they can be easily milked for higher scoring.

There is no such thing as an “easy” bullet hell shooter, but at the standard level, Muchi Muchi Pork! is on the lower side of the difficulty scale – not quite as approachable as Deathsmiles, but also less oppressive that Yagawa’s other shooters. The bullet patterns are less dense than a typical Cave game (barring some bosses) and many projectiles are of the oblong, spear-type, another hallmark of a Raizing title. While it still features a rank system, which cranks up faster as you build up your medal counter, it’s also not quite as rough as other games, and it drops a bit every time you die. The game is decently paced with five levels overall, and expert players will find two more courses – Harahara, which is the second loop, and Manpuku, which is flooded with suicide bullets – which can be enabled in the Options menu.

Graphically, it’s mixed – outside of some bouncy cleavage shots during the character select and the pre/post-boss scenes, the slightly embarrassing fetishism is largely absent from most of the game. But at least the theme is unique, in an odd way – the rest of the game resembles a generic cute-em-up, where you could change around a few sprites and call it a new TwinBee game… and merely an average one at that. It’s not at all ugly, but it is mostly indistinct, missing the candy-colored toy army vibe of Pink Sweets or the retro military feel of Ibara. The only exceptions are some of the enemies, which mesh the animalistic designs with mechanical planes and tanks, with predictably strange results. The action is full of random little sprites – every peddle of the bicycle ship pops out little onomatopoeia, as does every explosion of larger ships, but in motion, it missing some of the visual intensity found in other games. The music is simultaneously catchy and cloying, although the chirpy vocal theme song (only heard during the credits and in this curious promo video) is almost enough to convince one to take up chain smoking.

Muchi Muchi Pork! is not one of Cave’s more well-regarded shooters – it failed to capture the otaku audience that Deathsmiles did, and its relative ease didn’t exactly go over well with the more hardcore players. In spite of its initially off-putting aesthetics though, it’s eminently approachable, with a difficulty curve that isn’t maddening and a scoring system that’s both rewarding and easy to grasp. Its general unpopularity meant that it wasn’t ported to a home console until 2011, when it was released for the Xbox 360 on the same disc as Pink Sweets, another not-quite-successful Yagawa shooter.

Getting two games for the price of one is relative bargain, but the downside is that Cave didn’t quite put the same level of polish as their other 360 titles. Most noticeably, unlike most of its other retail ports (Mushihime-sama Futari, Dodonpachi Daifakkatsu, Deathsmiles, Espgaluda II and Akai Katana), the graphics have not been redrawn at all, so it keeps the same 240×320 resolution visuals as the arcade title. Purists have noted some small issues with the port quality – tiny bits of slowdown that differ from the arcade version, a few waves of enemies missing in later loops – but nothing that would be even remotely detectable for anyone who wasn’t an expert player on the arcade board, making the port quality otherwise more than satisfactory. There’s also a visible “Difficulty Gage” off to the side which keeps up with the rank.

In addition to a slightly revised 1.01 version (which is generally easier than the 1.00 arcade version by refilling the lard meter quicker and slowing its drainage, as well as loosening requirements to meet the second loop), the 360 release also includes two bonus modes. In Arrange Mode, you have a visible hit box, and the Lard meter is no longer segmented, allowing you to use it more, plus it will also slow down enemy bullets. You no longer need to climb through the medal ranks – by default, enemies destroyed with the Lard attack will drop 2000 point medals, although if you destroy a long enough string, they will increase to 10,000 points. Similar to Deathsmiles, there’s also a counter that increases as you destroy enemies. When it reaches 10,000, you can activate Fever Mode by either getting hit or dropping a bomb, which will not only convert all of the bullets onto screen into medals, but also make all enemies drop 10,000 points medals for the duration of Fever Mode or until you get hit. The fact that you no longer need to climb through the ranks to keep and maintain medal value means it’s not quite as rewarding as the standard Arcade mode, but it’s an amusing diversion nonetheless. It also has a new soundtrack, which isn’t nearly as good as the standard OST, but you can mix and match the original and arranged songs however you like. The Matsuri mode is unlockable only via a DLC code included with the initial release, which adds in boss fights from Pink Sweets. These don’t replace the normal bosses, but rather they show up right beforehand in addition to the regular fights. The disc is also region free, making it easy for importers to play without a Japanese region Xbox 360.