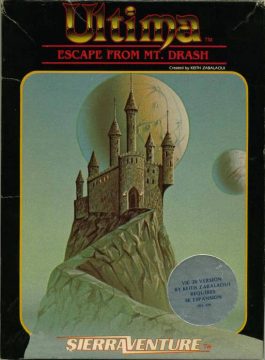 From the game manual:

“Escape from Mount Drash is a game of life, and unless you can prevent it, a game of death. You are a prisoner of the wretched, evil Garrintrots whose stronghold is high atop the treacherous Mount Drash. The mountain is honeycombed with old mining tunnels that have been long since abandoned by human life. The Garrintrots have stocked the caverns with all manner of creatures, and now use the caverns as gaming arenas where you are the main attraction.” 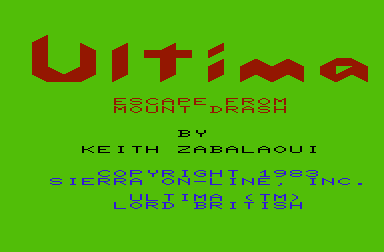 The previous paragraph has almost nothing to do with the actual gameplay, but that’s to be expected in the early eras of computer gaming; Atari VCS plots get much thinner. Escape from Mount Drash is a very odd game. It was created by Keith Zabalaoui, a friend of Garriott’s who helped to program Ultima II. It has been a persistent myth that Mount Drash was released by Sierra On-Line with no permission or involvement from Richard Garriott, but more recently it has been revealed that he was well aware and consented to using the Ultima title, to help coerce Sierra into publishing his friend’s project. Escape From Mount Drash has little to do with the rest of the series and is related to Ultima only in name (‘The Mines of Mount Drash’ are a location in Ultima I). The game is a simple dungeon crawler that looks superficially similar to the dungeon-crawling of Akalabeth and the first four Ultima games. The screen is divided into a first-person viewpoint in the upper left, an overhead map in the upper right, and a side-view of your character fencing with monsters on the bottom half. You have 99 seconds to find your way through the maze to the exit, and there are fifteen randomly-generated mazes in total. The game handicaps you slowly as you advance through the levels: at level 5, you must now find hidden gems to use the exit. By level 7, the maze overview disappears, by level 9 monster encounters now happen without warning, by level 11 your compass vanishes. The game requires an 8k memory expansion cassette to run. 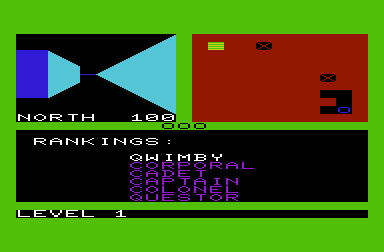 It’s very simple as dungeon crawlers go. It is also absolutely terrible. It is absolutely, horribly unplayable, and all because of the handicap. After level 4 the game simply becomes a frustrating exercise in pure luck to play, and when the maze map vanishes you might as well stop there. Without a fantastic sense of direction you’ll be blindly stumbling around in the dark, and forget drawing maps on graph paper in fine Wizardry or Bard’s Taletradition, because you only have 99 seconds and the maze is randomly-generated each time. This isn’t to disparage Mr. Zabalaoui directly (the game is, after all, an early work), but Mount Drash just isn’t very fun to play at all.

In 1983 Richard Garriott had already left Sierra to found Origin Systems, taking the lucrative Ultima brand with him. It seems like Sierra, in an attempt to milk the name a bit more, slapped it onto an unrelated game which was intended for their SierraVentures series of adventure games. Any history on Escape From Mount Drash is little better than hearsay; Sierra themselves barely advertised it (one ad in Compute!, July 1983) and not many copies were ever shipped. The release was low-key enough that Richard Garriott himself didn’t know the game existed until some years after the fact. Sierra seems to have sold enough copies to recoup production costs and pay the author, and then dumped the rest of the cassettes. In a callback to the internet-famous apocryphal story of thousands of unsold Atari E.T. cartridges dumped into a New Mexico landfill, one of the known surviving cassettes was actually found in a garbage pile. Escape From Mount Drash has become something of a collector’s darling in recent years due to the extreme rarity of the game, and eBay auctions on surviving cassettes have reached nearly $2000. If you happen to have one gathering dust in the closet somewhere, by all means go cash in; it’s not like you’d want to ever play this thing. Go play Runes of Virtue instead.

As of 2003, Ultima fan Kasper Fauerby has made available a Windows SDL port of Escape From Mount Drashwhich is faithful to the very rare original. The Windows port of Escape From Mount Drash has been released under the GPL and is open-source, and is available for download from Dino’s Mount Drash Guide, a website which is linked below. Since the tape image of the original game has been intentionally withheld by the current holders to prevent the creation of counterfeits and fake cassettes, this is the only real way available to play the game. All screenshots in this article are from the Windows version of Mount Drash. 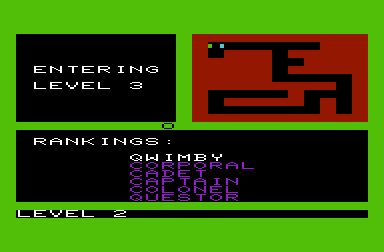 In 2006, amateur programmer Santiago Zapata, going under the handle Slash, released DrashRL, a roguelike dungeon-crawler based heavily on Escape From Mount Drash and Ultima lore as an entry for the 7DRL Challenge, a contest where programmers are asked to design a Rogue-style game in one week. The game still receives infrequent updates and has a small fan community.

Keith Zabalaoui is currently the president of Atomic Games, a North Carolina developer known best for the Close Combat series of computer wargames.