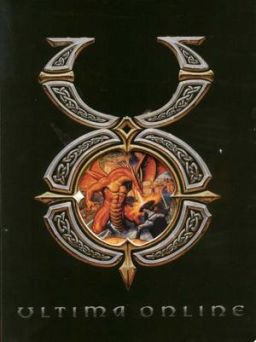 The scope of Ultima Online easily deserves an entire article to itself the same length as the rest of this one, and so this section will touch on it only briefly. If you’re interested in giving the game the full treatment, get in touch with the Hardcore Gaming 101 staff.

These days MMORPGs are prolific, with games like World of Warcraft, Rift, City of Heroes, Aion, Lineage, Maple Story and probably hundreds of others out there soaking up the time of tens of millions of people all over the world. With this proliferation of skinner boxes masquerading as games infecting every corner of the gaming industry, it’s hard to imagine the concept being new. In 1997, it was. Massively-multiplayer online games have existed for a long time, to be fair; commonly in the form of text-based MUDs (Multi-user dungeons), which were around as early as 1980’s Essex MUD on ARPAnet. What we would first recognize as something not quite unlike an MMORPG was at the time called a ‘Graphical MUD’, Stormfront Studios’ Neverwinter Nights on the America On-Line network in 1991, which inspired a small series of followers from other companies. These, however, were never what you’d call popular with the average gamer; the players of MUDs and Graphical MUDs largely being limited to a tiny subset of hardcore computer hackers, enthusiasts, and the limited number of technological early-adopters who took advantage of network services in the early ’90s. It wasn’t until Ultima Online that MMORPGs became a phenomenon, sucking up years of player lifetime and making millions of dollars in sales and monthly subscription fees. Ultima Online is the granddaddy of them all, the game that introduced the concept to the general game-playing public, popularized the genre, and invented most of the traits and concepts we associate with it. 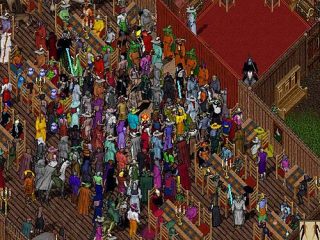 Ultima Online was designed primarily by Raph ‘Designer Dragon’ Koster, a grandfatherly figure to most Ultimafans, with creative producer Richard Garriott and director Starr “Lord Blackthorn” Long assisting, and a massive number of Origin people aiding in the creation of the game, including eventually the entire Ultima Ascensionteam. As the story goes, when the Stranger from Another World shattered Mondain’s Gem of Immortality, reality split into ‘shards’, reflected in the faces of the broken gem. The main Ultima series exists in one shard, and Ultima Online‘s version of Britannia exists in another. Players create virtual avatars and join a world of colossal size populated with other players, where they can go on quests, slay monsters, duel other players, uphold (or break) the law, build houses, trade in game goods, craft items, and all the rest: you, reader, know how an MMORPG works and do not need the gameplay described to you. Ultima Online was a fantastic, record-smashing success for Origin and Electronic Arts, and even today nearly fifteen years after launch it still has players and is receiving new content, graphical updates and a steady stream of almost yearly expansions from 1998 onward. After the closure of Origin Systems in 2004, EA-owned studio Mythic Entertainment, now Bioware Mythic, took over development of expansions and now maintains UO. 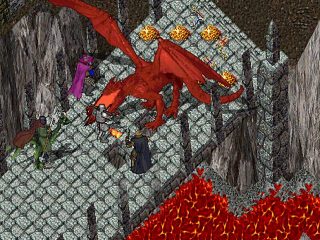 The very term “massively-multiplayer online role-playing game” was coined by Richard Garriott to describe Ultima Online. While MUDs had existed since the early days and other products such as Meridian 59 had predated it a bit, it created the whole modern concept of MMORPGs, and the ideas and effort that went into it have undeniably changed the very face of video gaming… just like Ultima Underworld, Exodus, Quest of the Avatar and The False Prophet did. 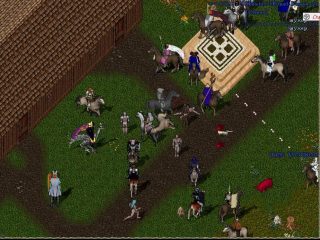 Ultima Online. This is where it started. It’s still probably among the best one of the lot, too. 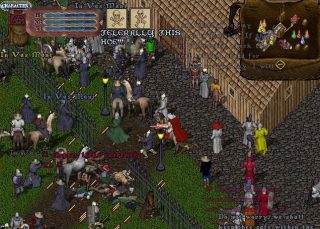