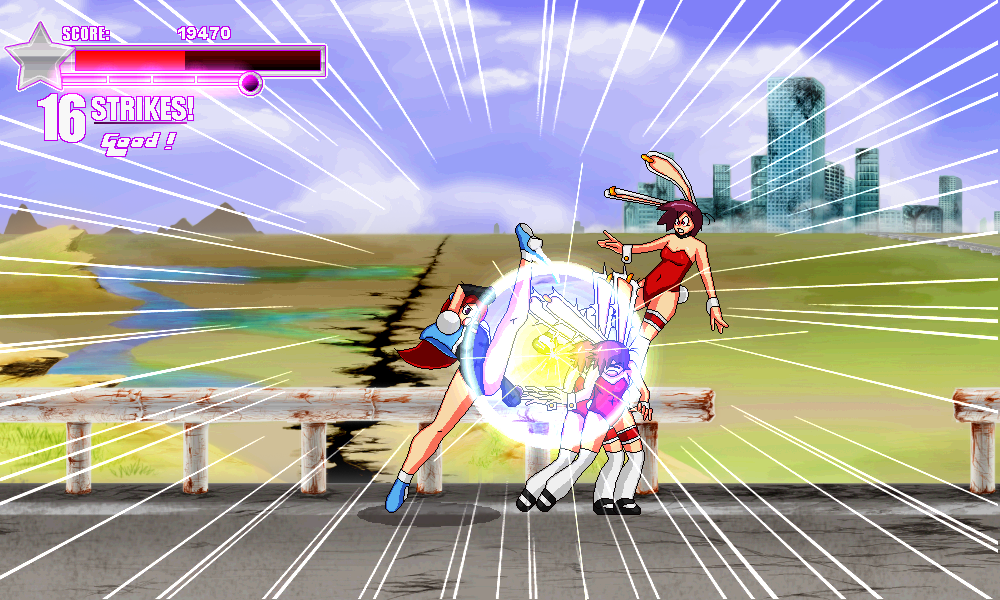 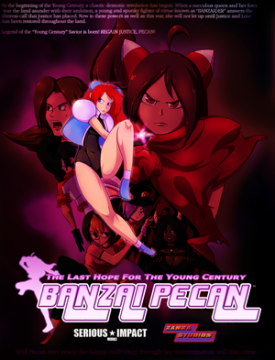 Hey, do you love anime from the mid to late 2000s like FLCL and Panty and Stocking? Do you like beat-em-ups in the style of Kung Fu Master? Most importantly, did you laugh uncontrollably playing GOD HAND during its most immature scenes? If you said no to at least one of these questions, you can safely move along. To everyone else, get ready to learn about the most absolute fusion of all three of those things, and chances are good you’re going to love it. This is Banzai Pecan, and it is a LOT. 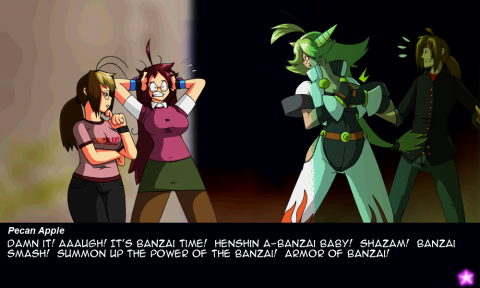 Started development in 2008 and finally released in a finished state come 2012, with an entire engine change in-between with complete sprite graphic re-hauling, Banzai Pecan is basically the entirely of the mid to late ’00s anime and weeaboo scene condensed into a single video game. It doesn’t just wear the pieces of its influences, but outright flaunts them. Almost every other line of dialog is a pop culture reference, Pecan changes into Yoko’s star outfit from Gurren Lagann‘s last arc for a beam special, the plot is equal parts Cutie Honey and Sailor Moon in structure, and even the main villain is just straight up a redrawn Ryoko from the Tenchi series. Even the ending is a riff on the ending of No More Heroes, putting a lampshade on the fact its breaking the forth wall in a similar way, and every single alternate color you can select is a reference to another character of franchise. Heck, one boss just straight up has a stand like a JoJo’s Bizarre Adventure character! I didn’t even mention the moped levels clearly inspired by FLCL (possible inspiration bunny suit wearing enemies as well – or that could possibly Code Geass R2, thanks to the first episode’s most infamous scene with Kallen in the casino).

The whole style of it is drenched in a love for the 90s arcade era, which you can get a hint of with an alt color being a reference to SNK’s Athena. The character sprites are all lovingly detailed, making up for a lack of fidelity and complex animation by using expressive frames that sell the impact of every hit. Pecan herself gets a load of fantastic faces, selling her smug and confident personality. Special moves are all very flashy and satisfying, and the finishers you can do are all delightfully ridiculous, including punching someone into the stars (ala Pokemon‘s Team Rocket) and a very God Hand–like move that shows a picture of a taco being smashed in half. You can piece probably together what that represents. The sound design carries a lot of the weight as well, despite the barely audible voice acting during fights. Every punching sound effect is instantly satisfying and loud, almost drowning out the music (which is quite catchy stuff) as you watch the lights flash and your beat down in action. The only voice that really stands out is the announcer, who gets new lines to introduce every level, all of them very tongue in cheek. Even the starting level text works a bit of that bravado in, using a lot of hot blooded quotes from other, familiar works. The game makes the most of what it has and jazzes it up by taking notes from its various influences, and it works far better than you’d expect for the three dollar price tag. 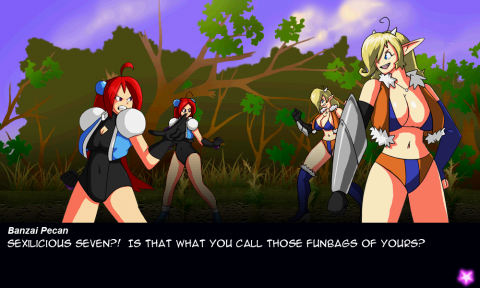 The game definitely has a lot of cheesecake designs but it never crosses a line into particularly tasteless, with exception to the BDSM-themed boss about halfway through and a few suggestive lines the succubi group make about Pecan’s boyfriend early on. As a result, it has a really fun personality to it that actually lets Pecan work as a character and not a lazily designed panty shot magnet. It also manages to give the succubi bosses wildly different themes and personalities that make each of them stand out, from a scatter brained gyaru to a Russian battle nun and even a class rep type with a second violent personality. The base enemy designs are limited to four plus color swaps, but the actual characters get a good deal of range and some fun expressions all their own. The game is irreverent and goofy, but the designers knew you have to put in hard work to make that sort of tone engaging. 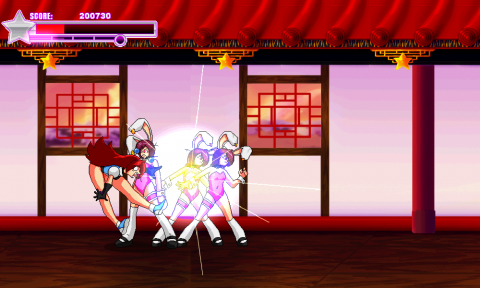 The writing for this game is perfectly in sync with the presentation – ridiculous nonsense. It’s not just the constant stream of references, but the general dialog and casual swearing. Everyone has a different sort of speaking style based on their particular archetype, like a gun totting succubus who refers to herself in the third person, but Pecan herself steals the show with every simplistic, blunt insult and back talk line. She comes off as strangely authentic, like a trash talking bud in a friendly but jokey game chat. It fits well with the game’s general energy, nobody really treating anyone seriously outside one very dark flashback that becomes comedic meta-fodder. It’s just really fun to read, and it never outstays its welcome. Even the bad jokes manage to be so bad that they wrap back around to amusing. 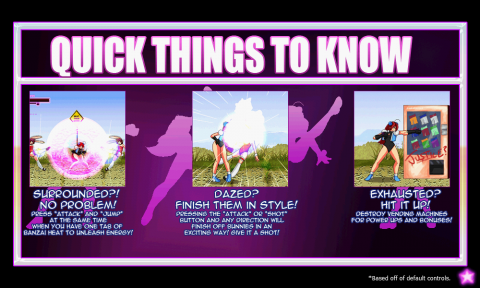 It’s worth mentioning all that God Hand inspiration isn’t just limited to comedy stylings and crotch destroying specials. Banzai Pecan outright takes the dodging and weaving system from that game and applies it to a 2D space, allowing you no blocking or moving up and down lines in the area. Everyone is on the same plane, and they’re always moving or attacking, so the key to getting good here is learning to LOVE that dodge function. You have left and right dodge rolls that move you past enemies, but the standing weave lets you dodge most attacks, exception to some specials and the tasers the bunnies bring (since they’re active for about a second, lasting longer than a weave). This is where the game makes a lot of its challenge, as nothing ruins your day as much as a big old jenny jackrabbit, who can and will wreck you and send you to the ground with one punch if you don’t dodge, enters the ring while there’s still a bunch of taser armed bunnies around. Chaos is the name of the game, and there is rarely breathing room. The aim is to thrive in that chaos, learning canceling and frame count of your moves to best navigate around your enemies and take them out while they go buck wild on you.

An interesting decision here is that the game keeps things down to four buttons. You have one attack, one dodge, a jump, and a special button that shoots minor projectiles on neutral and can activate supers that eat up your bar with proper inputs. Pecan’s move variants rely on directional input and your position on the air or in the ground, ala Super Smash Bros, giving you a down kick, dive kick, rushing kick, and uppercut that can lead into some air combos. You can also gain some meter with the taunt button, which makes everyone on screen pissed off, making it only recommended for advanced players. Combat is dirt simple, where you can actually make some progress against bunnies with button mashing, but once anyone else comes in, you WILL be punished for not knowing how to properly dodge and time moves. Further mastery of timing reveals even more layers, including the oh so satisfying counter system. If you hit an enemy right when you’re attacking you in a split second window, you can toss them across the field, hitting enemies behind them in the process. Your defensive options are limited, making the game one of pure offense and evasion to create flashy, explosive combos and chains. Succeeding here just feels fantastic in the same way getting good at a high end Platinum action game does. Your reward for mastery is spectacle, really showing your growth through explosive feedback. 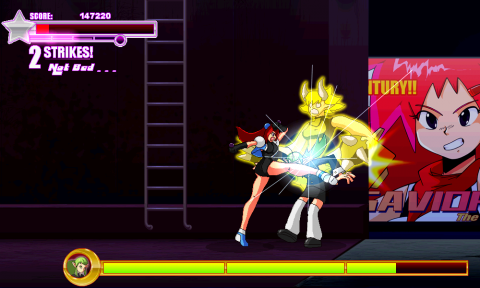 Oh, and when you start playing, it’s highly recommended you read the instructions, some tips, and try practice mode to get a feel for the game. If you don’t, you will probably be dying a lot very early on. Banzai Pecan has a lot of old school sensibilities in its design, which includes not being beginner friendly in any way outside a side area on the menu. If you want to enjoy this game, you do have to put the work in, making it not a great pick for casual players, despite the fairly simple combat system. That simplicity just means there’s more room to up the challenge by just making non-bunny enemies incredibly dangerous, exasperated by the nasty speed the action moves at. There’s also some traps and pits placed in some areas, which is much more annoying to deal with. You die once, and you restart the level from the beginning. They’re not long levels, but this does mean dying because you miss-timed a jump really gets the wind out of your sails. The bosses are also a little disappointing, most of them coming down to “use basic combo over and over, dodge that one deadly move, watch out for odd bunny drop, repeat until dead.”

The constant dying definitely adds hours to your play time, but you can also collect figures from gacha machines in levels to unlock an entire different 8-bit game within the game, which comes with a sound test and level select. As far as extras in modern games go, that is absolutely nuts, an entire game that could be sold commercially hidden as an extra for determined players to complete their collections. There’s also the always appreciated new game plus, which gives you access to a hyper mode used in the final boss fight. It’s also recommend you only use green zone, the easy difficulty, for practice, as the mode cuts content and even the final boss, leading to an amusing ending where Pecan’s best friend Flan interrupts the battle with Lady Strawberry and makes up an entirely different ending. 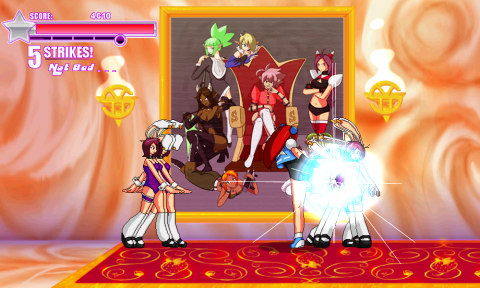 There are definitely issues here, but Banzai Pecan manages to stand out as a fun time regardless. The sheer unrestrained nerdiness just floods out of it, leaning so far into it that it’s difficult not to be overtaken in the mood. The game is so nerdy that it has Pecan recite terrible haikus after defeating a boss before they explode. The game is interesting as a time capsule for a particular time in western anime fandom, but it holds up incredibly well with sheer pizzazz and crazy action. Hopefully more is coming in the future to tackle the modern anime age, as the studio hinted in 2016 that something is in the works. Granted, they haven’t been active on social media at all besides retweeting some fan art earlier in 2018, but who knows. No matter what they do, if they do something, we can at least expect it to be delightfully stupid fun.