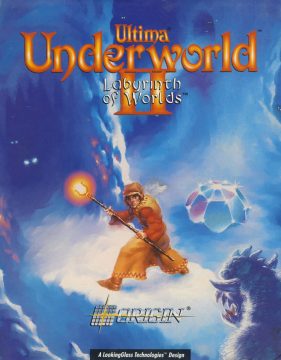 Taking place a bit after Ultima VII, it’s been a year since the destruction of the Black Gate, which sealed the Guardian’s route into Britannia… and your route back home to Earth. The reconstruction of the realm after the Guardian’s clandestine ravaging proceeds; and while there is still much work to be done rehabilitating former Fellowship members, rebuilding the economy and cleaning up the polluted landscape, Lord British has decided that the time has come to celebrate what has been accomplished. A Festival of Reconstruction has been declared in Britannia, and you, Avatar, are invited to Castle British as guest of honor. 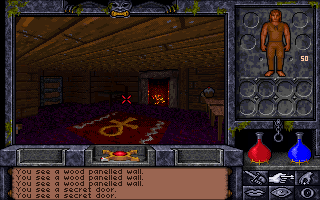 All Britannia’s bigwigs come: the Mayor of Britannia, representatives from the great keeps, the members of the Britannian Council, the King of the Gargoyles and the Companions of the Avatar. All the most important people in Britannia, in one place. Good thing the Guardian’s been defeated, right? Wrong. We wouldn’t have a story if he’d actually been foiled, would we? Casting a spell of brute force to reach across worlds, the Guardian raises a great indestructible dome of blackrock around Castle British, trapping everyone inside and cutting them off from the rest of the world. Nobody is quite sure what’s going on outside of the Castle now, but while Lord British has his best people work on finding a way to break through the dome and the Guardian taunts and tortures everyone within with portents and nightmares about his impending invasion, Lord British’s court mage Nystul and the Avatar discover a way to fight back.

The focus of the Guardian’s spell is a black stone that has appeared in Castle British, and through this stone, the Avatar can pass from Britannia to other universes and weaken the magic from the other side. Doing so requires wandering through the myriad blasted and beaten worlds that the Guardian has already conquered, offering a glimpse of what is stake should you fail. Has he actually invaded the rest of Britannia? Are your friends falling to his armies outside while you’re trapped in here? Can be answers be found in this labyrinth of worlds? 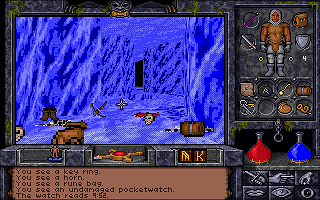 As is already obvious, Ultima Underworld II: Labyrinth of Worlds is tied rather more tightly into the overall Ultimastory than The Stygian Abyss was, taking place between the events of Ultima VII and Serpent Isle. Rather than be limited to a single great multi-level dungeon, in Labyrinth of Worlds you wander a plenitude of universes, all ones the Guardian has already conquered and grown bored of. More than in The Black Gate, the Guardian comes into his own as a fantastic villain here. While he taunts the inhabitants of the castle with visions of the death of their friends and the trampling of Britannia under the feet of his armies, and whispers mockery as they sleep, you get to tour the worlds he has already conquered and see the changes he’s made for his own sadistic amusement. 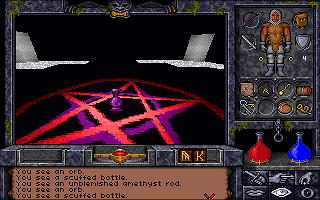 Labyrinth of Worlds has a great variety of environments to wander through. Besides Castle British, seen here for the first time in glorious 3D, the Avatar travels through a prison tower on a world where goblins have overthrown humanity, a city-state frozen into a block of ice, an alien world full of amorphous mechanical-minded beings, the vastness of the ethereal void, and others just as strange. As Avatar, of course, your job is to set things right, or at least set them on the path of improvement; gradually usurping the Guardian’s power while his back is turned to undo his spell and free Castle British. Notable among the worlds is Killorn Keep, a floating castle in the sky of a dark, parallel-universe version of Britannia, full of twisted versions of Britannians like Lord British and Iolo, and even an evil Avatar who becomes one of the major antagonists. Here we see the nature of the Guardian’s mockery of the eight virtues by learning of the version own his own devising he institutes. 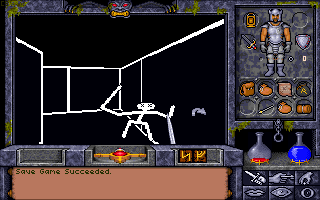 The Guardian’s Code of Virtue

Sobriety – Being free of chemical, magical or other substances or influences that impede the voice of the Guardian from being heard.
Punctuality – The commitment to being prepared in a moment to carry out the Guardian’s orders.
Obedience – Complete submission to the Guardian’s demands and wants.
Vigilance – To constantly be aware of foreign and domestic foes of the Guardian’s rule.
Conformity – Complete acceptance of the Guardian’s values and lack of desire to surpass another of his servants.
Efficiency – The prevention of any waste, in any function of life from food, to energy, to lives.
Silence – The need for the Guardian’s servants to not speak out against his order.
Diligence – the ability to seek a goal and continue towards it, necessary to ensure the victory of the Guardian’s armies.

Ultima Underworld II was developed by Looking Glass Technologies (later Looking Glass Studios), a company created when Blue Sky Productions merged with Lerner Technologies, a small development house best known for their simulation game Chuck Yeager’s Advanced Flight Trainer. The two companies had already been working fairly closely together, and when they started borrowing each other’s employees the merger seemed a no-brainer to both groups. Besides the plot, villain and the imaginative world design, Ultima Underworld II isn’t terrifically different from Ultima Underworld. It has technical improvements, including a rather larger viewport than the previous game, farther draw distance and moderately improved lighting, as well as highly detailed character portraits that put The Black Gate‘s tiny pictures to shame. There is some modification of the skills available to learn, and skills are now taught by NPC trainers. The sound effects are notably improved and more natural-sounding, and the music is decent but not quite as immediately memorable as The Stygian Abyss. Otherwise, the description of and heaping praise for The Stygian Abyss also applies here. 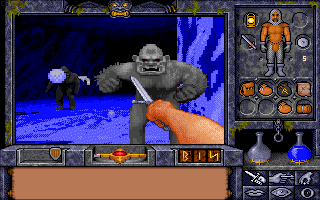 Labyrinth of Worlds was originally created for IBM PC, and is the first new game published by Origin Systems after their acquisition by Electronic Arts. A year and a half after the original release, Electronic Arts Victor released Japanese-language ports for the FM-Towns and the PC-98. Both of these are identical to the PC release except for the language.