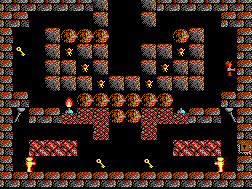 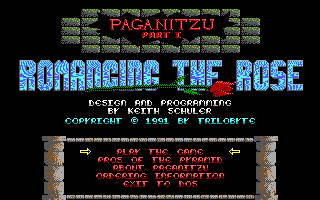 In 1990, Keith Schular released a little puzzle game for the Softdisk disc magazine. The game never became very well known, but a year later, Keith and his new company Trilobye (not to be confused with the 7th Guest guys) released a sequel. They let Apogee publish it, and it would eventually become their only puzzle game.

The story is that you’re Alabama Smith (groan), archaeologist and adventurer. Inside the ancient Aztec temple of Paganitzu (That’s Aztec for “Temple of the Gods”, apparently), lies an artifact called the Jeweled Rose. At the end of the first episode, once he finds it, he accidentally releases a spirit of evil named Omigosh (Double groan), and the rest of the episodes focus on Al trying to find a way to stop him. 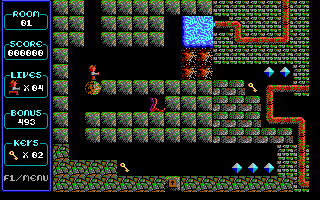 There’s actually a lot of plot involved, mostly in the endings to each episode. While it’s mostly your standard adventure story with one interesting twist at the end of Episode 2, there’s a lot of nice looking EGA art not used in the gameplay itself. It’s quite the step up compared to Duke Nukem, where you just got a couple of headshots and text before the game told you to do the next episode. There’s also a lot of silly humor, including yet another Commander Keen cameo hidden in one of the levels.

The game itself is a top-down puzzle/action game, with each level taking place on a single screen. It’s a little like a darker, grittier Lolo or Chip’s Challenge, in that respect. Everything happens in real-time, so sometimes quick reflexes are needed, although not quite to the extent of something like Crystal Caves. The goal of each level is to find all the needed objects, like keys or gems, and get to the exit. The hard part comes in how you clear your way to the objects and avoid the hazards and monsters guarding them. 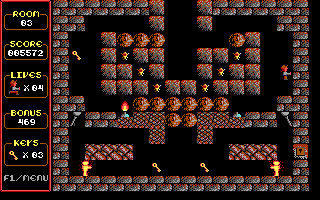 Some of the objects to deal with include boulders, which can be pushed around to make a path through water and trap monsters, dirt, which you can pass through and monsters can’t, and switches to control traps. The monsters also require different tactics to avoid, as some will shoot you if you get in their line of sight, some need to be trapped between boulders, and some can push you into the way of something else entirely. They all have their own pattern of movement, and it’s important to watch them carefully before you make your move.

It’s a difficult game, and one slow move or boulder pushed into the wrong place means you’ll have to start the whole level over. You only get so many lives, although the fact that you can save and reload your game from any level makes a lives feature a little pointless. A lot of the puzzles do get quite challenging, though, and the game’s old-school design philosophy might get a little frustrating after a while. There’s also a few secret puzzles to find from the original Chaganitzu hidden in some stages as well. 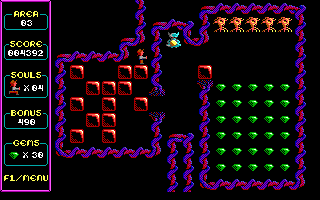 Graphically, the game is decent enough for a puzzle game, although it’s not quite up to par with some of Apogee’s other games of the time. It’s a very gloomy looking game, since the most common colors you’ll see are brown, gray, and black, but that’s a pretty appropriate choice considering the game’s setting.  There a few nice touches, like the death animations. Get touched by a spider and Al will fall apart into a bloody mess, although the small sprites make it more humorous than anything else. The sound, much like the rest of Apogee’s games of that period, is only from the PC speaker, and these are even more minimal than usual.

Paganitzu is a pretty decent puzzle game, especially if you’re into reflex-oriented stuff like Lolo or Boulder Dash. There’s a good amount of puzzles, and an actual story involved worth playing through. There were actually plans for a side-scroller sequel to Paganitzu, known as “Alabama Smith and the Bloodfire Pendant”. The game was eventually released as Realms of Chaos, with the Paganitzu references mostly removed. The exception is the next-to-last level and the ending, which pay tribute to Schular’s previous game. 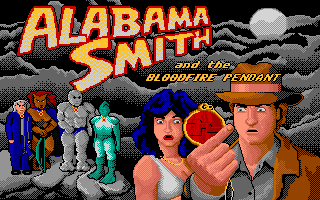 Thanks to Stijn van Empel for the heads up on the remaining Realms of Chaos connections!