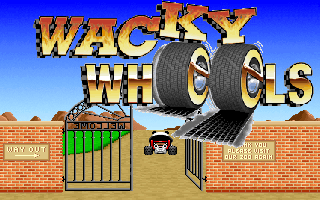 Super Mario Kart was a pretty popular game when it hit the SNES in 1992, although the flood of licensed and mascot-based racers wouldn’t start until after its N64 sequel. So a little shareware company named Beavis-Soft wrote up one of their own. A bunch of zoo animals have escaped, and the first thing they do is… get in go karts and start racing each other. This was long before the days Diddy Kong Racing gave you a reason to sit in a tiny cart and drive around in circles, so a lack of plot is acceptable.

There’s actually a pretty decent variety of modes available, even compared to the original Mario Kart. You have your standard Grand Prix mode, where you race against the AI on five different tracks to see who can earn the most points. There’s also a Time Trial mode, where you race across a track and try to beat the best time on it. The most interesting single player mode is the ‘Wacky Duck Shoot’, where you pick an arena and try to shoot at as many ducks as you can before time runs out. 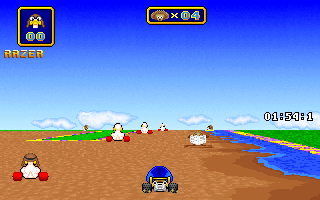 Of course, there’s no denying that most people played Mario Kart for the multiplayer, and Wacky Wheels does a nice job of bringing that experience to the PC. You can have a single race, either with the AI driving against you and your opponent or just head to head. Or you can get into a ‘Shoot Out’, which is basically the Battle Mode from Mario Kart. Two players drive around a small arena, blasting at each other with weapons found on the track until somebody scores a certain number of points. Of course, if you load up the game to play with a friend, you’ll want to make sure you have a decent gamepad that DOSBox will accept so that you don’t end up crowding the keyboard.

Surprisingly enough, there’s actually a mode for online play, although good luck getting it working through DOSBox or an authentic DOS-era computer. You can even taunt your opponent online or off with the function keys, a little trick called ‘Remote Ridicule’. This will cause a little demon to pop up on his screen and either moon him or insult him with a giant sign. Remote Ridicule would show up again in Apogee’s other multiplayer games, such as Rise of the Triad and Duke Nukem 3D, but with voice clips instead of graphical taunts. Pretty impressive, especially once you consider that Mario Kart wouldn’t actually get an official online mode until the Wii incarnation, 14 years later.

The actual racing itself does decently, and the programmers did a good job of replicating Mario Kart’s Mode 7 effects, although the scrolling isn’t quite as smooth as on the SNES. There’s a little more than 30 tracks in all, but aside from their basic layout, they all tend to be a bit same-ish. The only real hazard on the tracks is deep water, which will heavily slow you down until you get out. Oddly enough, lava works the same way. 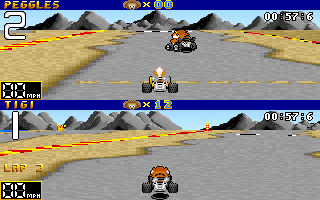 What’s odd about this game compared to other kart racers, however, is that there’s a way to lose a race before it even finishes. If you hit a solid obstacle while going too fast, your animal will fly out of the cart and hit the screen, cracking the monitor. This does take away one of your three lives, so you’ll want to avoid having this happen if possible.

There’s a few powerups you can collect, although not quite as much of a variety as Mario Kart. The most common powerups are hedgehogs that litter the track, which you fire out of your kart like a green shell. There’s also spread shot fireballs and bombs and oil slicks you toss behind you, best saved for tailgaters. Oddly enough, the AI is completely incapable of using powerups at all, which will come as a blessing to anybody who’s lost a race because Mario turned on his starman in front of you just before the finish line. 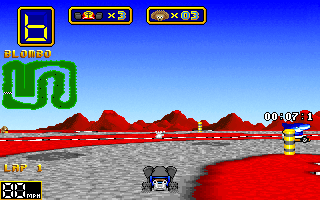 Of course, that doesn’t stop the AI from being a pain, especially on the higher difficulty levels. On the Champion difficulty, the AI racers will teleport themselves right behind you if you get too far ahead of them. Of course, if you’re really terrible, you can always activate the ‘Kid Mode’, which makes all the karts including yours extra slow, auto-accelerates, and makes the AI pretty much impossible to lose to.

The graphics are pretty good, even if the tracks could do with a little more scenery and detail. Of course, Mario Kart had the same issue, so it’s just a small complaint. All the playable animals are cute to look at, and the hedgehogs you collect as ammo have a few amusing animations while they’re sitting on the track, like reading a newspaper or lifting weights. The music is your standard DOS game soundtrack, which sounds pretty good, if unremarkable. The constant honking and animal noises that play whenever you get near another kart can start to wear on your nerves, though. 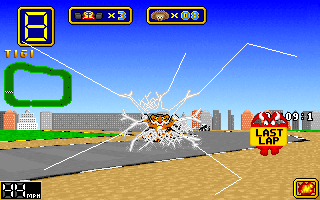 This is also one of the first of many cameo appearances of the infamous Dopefish. Sadly, you can’t play as him, but there’s a way to get him to appear over your driver. When the race starts, hold down the brake and start moving in a circle without having the lion leave the screen.

All in all, while most people will end up preferring the real thing, Wacky Wheels is a great substitute for anybody who wanted Mario Kart’s racing action on the PC. The racing is fast and enjoyable, whether you’re playing by yourself or with friends, and there’s enough variety in the different modes to keep you entertained for a while. .