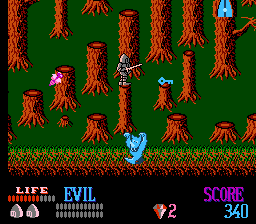 In 1987, if you wanted medieval fantasy on the NES, you didn’t have much choice. You really only had Ghosts ‘n Goblins, which was like a dish of frustration served with a side of flagellation. Famicom owners in Japan could play Final Fantasy and Dragon Quest, but these didn’t get exported to the west until some time later.

Enter Rare, who impressed Nintendo with NES tech demos put together by reverse engineering the console without documentation, and became its first western developer. The only games they developed up to this point were VS. Slalom for the Nintendo VS. System, and its console version Slalom not long after that. Rare would of course eventually be well known for games like Battletoads, Donkey Kong Country, and GoldenEye, but next in line after their skiing game was a completely original action adventure called Wizards & Warriors that would scratch that medieval itch and ultimately spawn three sequels, now largely forgotten since the 8-bit era. 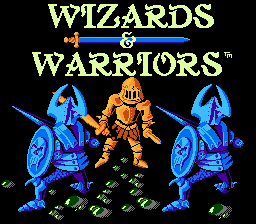 The title is unfortunately misleading, as there is only a single wizard in the game, and your character Kuros is the sole warrior. The box art, too, is notoriously inaccurate, depicting the knight protagonist as a Conan-like barbarian battling foes, an art choice that would carry over to every one of its sequels until III, as well as his appearance on The Power Team segment of 1990 video game show Video Power. The bare-bones story is the typical “villain kidnaps princess” plot and is explained via a few paragraphs in the game’s manual (remember those? If you’re under the age of 20, of course you don’t). The princess never even gets a name in the game.

The gameplay itself, though, is compelling and largely holds up today. Each level finds Kuros traversing trees, caves, and eventually a castle with platforming action vaguely similar to Metroid. That is, you often have to jump from tiny platform to tiny platform in order to get to the top of an area, while praying that you don’t miss a jump or slip down a slope that sends you tumbling from whence you came. Each level is fairly large and features impressively smooth 4-directional scrolling, something that was unusual in platformer games at the time.

Along the way, you need to collect colored keys in order to access doors of the same hue, a game mechanic that Doom would later popularize for its level progression. Each level also has a handful of colored treasure chests that can only be opened once you get the appropriate key. There’s one last requirement to finish each level: you need to acquire a certain number of diamonds to get a red knight guardian to move out of the way of the level’s exit. These diamonds are littered about the levels, with some liberally placed behind hidden doors that are only visible if you bump into them. Once you appease the red knight, you face a boss whose defeat opens the way to rescue a fair maiden, a la Super Mario Bros. 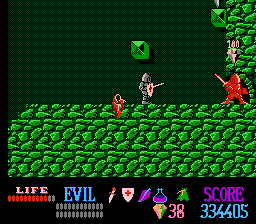 For a game that came out fairly early in the NES’ lifespan, the jumping feels surprisingly precise. You have quite a bit of control of Kuros after lifting off from the ground, more in line with the movement of Mario in Super Mario Bros. 3 than the original SMB. You can’t change the direction Kuros faces once in the air, but you can fairly liberally move left and right as he jumps and falls.

His sword controls, on the other hand, feel a little off, primarily due to the clumsy animation of him swinging his sword as if he’s swatting at flies, which, ironically, are an obnoxious pest in the first level. You can’t swing your sword while jumping, but being airborne often makes it easier to defeat enemies; after Kuros’ feet leave the ground, you can simply aim the point of your sword at the baddies and stick them like a pincushion. Fairly early on, you can find the Dagger of Throwing, one of two additional boomerang-like weapons that you can toss at enemies to complement the short range of your sword. It’s so useful, in fact, that it largely becomes your main mode of attack for the rest of the game. 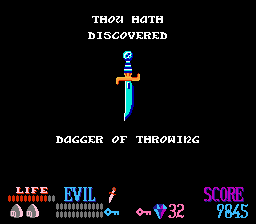 There are several other artifacts you can find along the way to make the job of getting to the final princess easier. Oddly, another early find is Kuros’ shield, something he apparently left behind when otherwise fully suiting up for fighting evil. Occasionally, you’ll also find colored potions which briefly augment an ability: blue for fast movement, pink for jumping high, and red for invincibility.

The music, by Rare’s longtime composer David Wise, is pretty catchy, with a fugue-like song greeting you at the title screen. The tunes in the various levels range from upbeat and encouraging (the opening tree level) to atmospheric (the fire caves) to cliché yet fun (an 8-bit version of Mysterioso Pizzicato used for the boss fights). The fire cave theme is unfortunately also used in the two subsequent levels, so it eventually gets monotonous and mars an otherwise decent soundtrack.

The game has a few other annoyances. If you get down to 3 health bars, the music changes to a bothersome warning tune, though it serves its purpose to alert you that you are about to die. Irritatingly, the common enemies quickly respawn off-screen, making exploration a bit tedious, though the environments would largely feel lifeless if they didn’t. Finally, if you don’t like the disappearing block challenges in Mega Man games, you likely won’t be a fan of the first castle level towards the end, which features tiny platforms that retract into the castle walls. They don’t completely disappear from view, however, so they’re less daunting than the Blue Bomber’s. 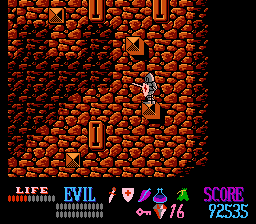 The overall difficulty of Wizards & Warriors is very low, in stark contrast with the “Nintendo Hard” caliber of many games in the NES era. You start with 3 lives but have unlimited continues, and more generously still, you start in the exact spot you died every time you come back to life, even after using a continue. In fact, the only real disadvantage of losing your last life is that your points reset to zero, and if you found an upgrade for your throwing weapon, that gets set back to its base level as well.

This means that just about anyone can beat the game with relative ease. The boss fights provide the only real challenge; some are harder than others but usually can be overcome by tossing your ranged weapon and then letting it do all the work while you dodge. The final boss, the titular wizard named Malkil, is remarkably harder than all the other big baddies, thanks to a combination of his lair being much larger than the other bosses’, a double life bar, and regenerating health. If you defeat him, you get a very basic ending, par for the course for early NES titles: you save the princess, just like all the other levels, and then get to enter your initials for a high score table. 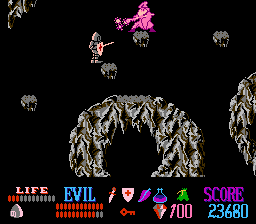 Overall, Wizards & Warriors is still very playable and, thanks to its generous difficulty, enjoyable today. Rare has been developing well-known games for a few decades now, and it’s worth hunting this one down to check out a piece of their early history, their first platformer game before the likes of Donkey Kong Country and Banjo-Kazooie.

The NES sequels would refine the basic framework of this game, creating a more original story and less focus on the treasure hunting in the second game Ironsword: Wizards & Warriors II, and providing a more open-ended design in the third, Wizards & Warriors III: Kuros: Visions of Power. The first one, though, is the only NES W&W to solely be developed by Rare, as the later games were contracted out to fellow UK-based developers Zippo Games. The Game Boy sequel (the peculiarly-numbered Wizards & Warriors X: Fortress of Fear) was developed in-house by Rare and focused more on action than exploration.

The Japanese version was reprogrammed by NMK and published by Jaleco, and renamed Densetsu no Kishi Elrond (“The Legendary Knight Elrond”). Curiously, Elrond is the name of the kingdom in Wizards and Warriors and Kuros is the knight, so it’s strange that they swapped names. The title screen has a different orientation, with the hero’s back facing the camera. There are less enemies in the stages – the opening area doesn’t have any – plus some bosses and item locations swapped.  You have a longer life meter, represented as a numerical figure rather than as a gauge, but to balance this out, you only have a single life. NMK was seemingly was so enamored with the game they developed a somewhat similar arcade game called Legend of Makai. 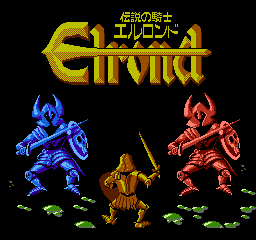