After a long vacation on Zack Island, the Dead or Alive series finally went back to fighting games in 2011. Dead or Alive Dimensions is not an entirely new episode, but rather a retelling of the story so far. After all, the story ark of the big feud between the Mugen-Tenshin ninja clan and DOATEC came to an end after the fourth tournament, although you are not to blame if you didn’t notice it.

Dimensions sets out to fill all the gaping holes in the series’ formerly extremely thin narration by leading players through a “Chronicle” mode, which covers all four tournaments, with extensive cutscenes and fixed character selections for each episode. The story should be either called fleshed out or just drawn out, though. Especially the first two chapters are mostly concerned with turning Kasumi into an even more of a Mary Sue than before. You’d assume the opposite after Tomonobu “she’s my daughter” Itagaki took his leave, but apparently the new Team Ninja desired to prove once more that they’re still really bad at storytelling without him (see Metroid: Other M). That said, after taking the focus off from her, the third and fourth chapters are actually tolerable.

While the game contains only one (hidden) new character with ninja-boss Shiden, it features the biggest roster in the series yet, as every character from the series (with the understandable exception of the Halo guest character) is playable, including the bosses. Even the encounter with Genra is turned into a normal fight and much less annoying in consequence. There’s also a rather high number of stages. A couple of them are new, but most are carried over from previous games. Backdrops that go crazy with many animated or breakable objects, like the aquarium, the safari or the seaside market, are generally avoided, though. As a nod to Other M, there’s also a Metroid stage. A teaser had hinted at the possible inclusion of Samus Aran as a fighter as well, but she’s not in the game at all.

No experiments have been made with the fighting engine, which is closest to Dead or Alive 3, ditching the stiff controls from Dead or Alive 4 and the arbitrary input exception for mid-kick counters. Cheap counter abuse is as present as ever, together with the extreme disadvantage when being bounced against a wall. 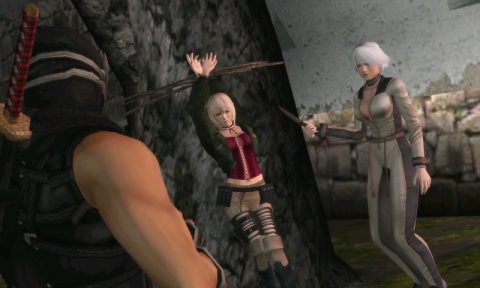 The storytelling is more elaborate than ever.

The additional playing modes are the usual deal, but each brings new annoying issues. Worst of all, with the exception of Free Play you’ll find no difficulty setting in the options. Instead the arcade, survival and tag match modes offer a number of courses, each with their own difficulty level, but of course the game forces you through the laughably easy stages in order to unlock the “hard” ones. After Dead or Alive 4 had been the hardest game in the series yet, Dimensions is unquestonably the easiest. Survival mode is especially laughable, as only the bosses that appear after every ten enemies might or might not require you to actually look at the screen to win. Technically, the last 20-or-so fights in the 100 enemies challenge are somewhat worthwhile, but by that time any formerly sane person has long lost that distinction out of sheer boredom. You certainly won’t be looking forward to try again when losing in the final round after 80+ fodder enemies.

The greatest fail is tag mode, which always teams you up with an AI partner instead of giving you control over both characters. The AI is simply terrible, switching you in at the most inconvenient moments. The recovery rate for the resting character is insane, though, that’s why most of the tag challenges put you up against bosses that easily deal 80% damage with a single attack.

You might be looking towards online play after being disappointed by the single player modes, but online is a letdown, too. Most matches fought for this review had terrible lag, and while you can turn down a challenge based on an opponent’s fighting record, the game doesn’t give you a ping or any other orientation for the connection quality. Oh, and there’s no tag multiplayer at all. 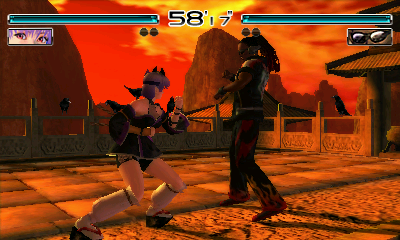 Some of the costumes are unique to this episode.

Finally, there’s a stupid and useless “Showcase” mode, in which you move the 3DS to change angles and take 3D pictures of the fighters standing in boring poses; or more precisely, one boring pose in the beginning, as the rest have to be unlocked, a whole 1000 different “figurines,” one more boring than the other and often the same poses just in different costumes. It seems the premise for the mode was a desperate attempt to somehow use the 3DS waggle capabilities in the face of a complete lack of ideas.

When you walk past other DOA players with their 3DS in sleep mode, you get so-called “Throwdown” challenges against an AI character representing them. Every once in a while, Tecmo also puts up official throwdown challenge with completely arbitrary difficulty. Beating them gives you “special rewards” (read: more boring figurines unlocked).

There aren’t that many costumes that can be unlocked by playing the game, because – tune in the next silly, forced inclusion of 3DS features – the rest of them have to be downloaded. But you can’t download them at will or even buy them. No, you have to wait for Nintendo’s schedule of one costume a day, and leave your 3DS lying around with activated wireless internet connection until the game downlaods it automatically. There are up to three downloadable costumes per character, and the schedule seems to be in random order, so be prepared for months of waiting until you get everything. Meta-game rewards are fun and all, but do they need to be done in such a stupid and unnecessarily inconvenient manner? Of course, if you play the game in five years or so, chances are the costumes aren’t going to be available at all, anymore. The amount of overall costumes per character is about on par with Dead or Alive 2 Hardcore, but most are well known, with fresh designs mostly reserved for the newer characters that hadn’t already gotten the DOA Ultimate treatment. 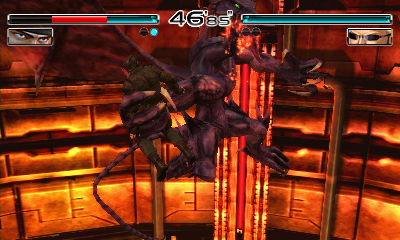 Ridley takes an active role in the Metroid stage.

Aside from the confinement to smaller, less eventful fighting areas, DOA Dimensions looks close enough at least to its big brothers on the original Xbox. Keen observers will notice simplified hair physics, which incidentally results in much fewer clipping errors. The pull behind the graphics of course is supposed to come with the 3D. The game doesn’t add any fancy additional exploitation effects other than a focus blur during the pre- and post-fight taunts, but the effect is used quite convincingly, aside from one glitch in the snow stage that makes the characters appear as if they were transparent. The 3D mode comes with a noticeable framerate drop, though.

The “small” version of Dead or Alive might be actually the biggest in content yet. But even if you’re a fan, it finds plenty ways to annoy you with unnecessary limitations and backfiring features. The core mechanics are as solid as ever, but after so many revisions the formula is really starting to get old. For anyone who always wanted to be enlightened about the DOA canon, this is just the right fix, but otherwise it stands only on its merit of being the first handheld version in the series.