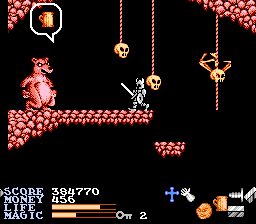 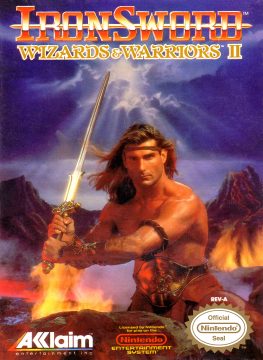 When Rare impressed Nintendo early on with their NES technical chops, the Japanese company gave them the unique privilege of producing as many games as they’d like, getting around the limit Nintendo usually put upon publisher’s producing games for the NES.  There was just one catch – Rare had to find a publisher willing to put their games out.  So, the games they developed came out under many different labels like Acclaim, GameTek, Milton Bradley, and even Nintendo themselves.

Rare had an incredibly prolific output on the NES, but even they had a limit to what they could do.  Thus, they occasionally farmed out development to others and handed the reins of Wizards & Warriors to fellow UK-based development studio Zippo Games for a sequel. 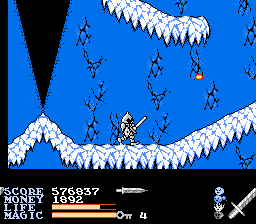 The knight Kuros returns in Ironsword: Wizards & Warriors II, in a game with a less cliché storyline than the first.  It simply but effectively lays out the structure for the game: Malkil the evil wizard has returned and overtaken the four elemental powers: Wind, Water, Earth, and Fire.  Kuros has to travel to the land of each one, befriend an animal king for assistance, and then stop the evil elemental terrorizing the area.  Each evil power is protecting a piece of the Ironsword, and once Kuros can assemble the shattered weapon back together, he has to stop Malkil again.

Quite a bit has changed since the first game, much to the detriment of a sense of fun.  The original Wizards & Warriors game is notable for being very generous to the player: you have unlimited continues, you pick up right where you died when starting a new life, and very little resets after losing your last life and continuing.  It helps offset that game’s slightly janky controls and ultimately provides little challenge as a result, but it’s still quite fun to play. 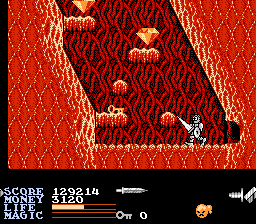 The sequel, on the other hand, metaphorically kicks the player to the curb, throws gasoline on them, and then lights them on fire.  First of all, the enemies are unrelenting and respawn frequently – you never get more than a second or two break before being bombarded by angry animals, monsters, or projectiles that rush toward you from off-screen.  While that’s actually not that different from the original game, damage inflicted upon Kuros here is seemingly random.  Sometimes, he’ll take a slight ding to his health bar, but other times he’ll suddenly die without warning upon colliding with a common enemy.

What’s happening in actuality is that there is no brief invincibility after running into an enemy, unlike in W&W I, where Kuros would flash for a couple of seconds and can’t immediately be hurt again.  So, if his body crosses paths with an onscreen baddie for more than a split second, his health gets quickly sapped.  Furthermore, shields in this game don’t block projectiles like in the first; they simply provide a bit of damage reduction and don’t completely stop rocks and arrows.  So, Kuros has to keep moving and dodging to have a chance at staying alive.  In fact, he apparently was in even more of a rush to get out the door in Ironsword than in the first game, as he not only forgot his shield at home this time around, but also his helmet. 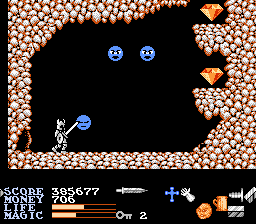 Kuros’ sword slashing ability is just as poor as in the first game, but he no longer has a boomerang-like dagger or ax to compensate for it.  The in-the-air sword stab that worked well in W&W I often results in Kuros taking damage too in Ironsword, at least until he gets a longer weapon later on that with a bigger hit zone, the better to protect the knight from all the stuff cascading through the air and actively trying to take him out.  Overall, his offensive and defensive capabilities from the start are much worse here than in the first game.

When he loses a life, Kuros once again picks himself off the ground and dusts off his iron pants right where he died, but he no longer has unlimited continues.  This is arguably fair and par for the course on the NES, though you’ll likely burn through them really fast, due to the sheer amount of things that are trying to hurt Kuros.  A big game design flaw, however, is how the final level ignores any continues you had left – they’re simply gone.  Think you have an extra set of 3 lives banked up to handle what is by far the hardest boss in the entire W&W series?  Surprise!  That final continue fell out of Kuros’ pocket on his hike up to the last mountain.  The game’s manual does in fact warn you of this fact, but that’s little consolation of what’s possibly Ironsword’s most egregious design decision.

There’s some hope, though. The developers added a password system so that you can pick up at the level you left off at later on.  Oh, wait – it doesn’t keep track of Kuros’ hard-earned money, nor the hard-to-find magic he’s been saving up.  Adding insult to injury, you can only see the password mid-action on the spell selection screen.  If you forget to write it down before you lose your last life, then you’re out of luck, as the password is not displayed on the game over screen.

Long story short, the game actively tries to grind you down from the beginning.  The developer Zippo Games, being new to the series and not being involved in the original game, might account for why the game mechanics changed fairly drastically in the sequel. The end result is that the sense of fun present in W&W I is very decidedly lacking in Ironsword, having been replaced by frustration and angst.

Not all the changes are for the worse, however.  The story, as noted above, is a step up from the first game; gone is the princess needing to be rescued at the end of each level.  There is in fact no human royalty in sight in Ironsword.  The music is also a highlight and was done by Rare’s main composer, David Wise, who wrote the tunes in all the W&W games.  Some of the arrangements feel a bit sparse, but they set the appropriate mood for each level, with the possible exception of the final stage – it features the happiest-sounding music for an extremely difficult fight that will see Kuros get trounced again and again.

The level progression has been simplified a bit: gone are the multi-colored keys, doors, and treasure chests. Each level is split into two main areas.  Kuros needs to find a golden object desired by a friendly animal king in the first half, who will then grant passage to the second half.  While in the latter, Kuros needs to hunt down a special offensive spell to damage and defeat the evil elemental taking up residence there. 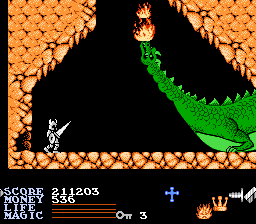 There’s one catch, though: once Kuros obtains one of these boss-defeating spells, simply swinging his sword activates it and slightly saps his magic bar.  Magic can be a pain to come by in some levels, and it’s very easy to accidentally use up a significant portion of the magic bar by simply swatting Kuros’ sword at everything trying to kill him.  If his magic bar depletes before the boss is defeated, Kuros has to tediously kill as many minor enemies as possible for the small chance that they’ll drop the item that fills a tiny part of his magic meter, and this sometimes requires running away from the boss.

Once an elemental is defeated, Kuros receives a part of the Ironsword.  Unfortunately, any keys remaining in his inventory don’t carry over to the next level, as they’re turned into points for your largely meaningless score.  Kuros also loses the special spell that he used to defeat the elemental.  Both of these facts are a bummer, as keys are rare, and being able to accrue the special elemental spells for use in the rest of the game, say, Mega Man style, would have helped to elevate Ironsword’s fun factor and balance the difficulty.

The game features ingeniously designed boss sprite art, pulling out tricks like combining static background art with moving sprites to resemble a much larger sprite, and stacking sprites vertically (such as the friendly Dragon King in level 3’s volcano) to get around the NES limitation of 8 sprites per horizontal scanline.  They really do shine when compared to the much more diminutive boss sprites in the original game. 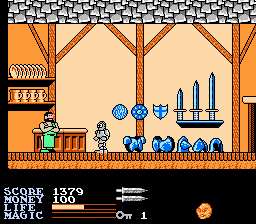 The last noticeable change in Ironsword is the addition of a shop, which can be found in most levels and is the main reason this time around for gathering up the diamonds that litter the world.  Each emporium of goods contains keys, food, and a special item or spell.  If you’re the type that enjoys throwing money in the trash, rather than for nourishment or an extra life, there’s also an option to gamble it away in a simple pachinko-like cup game.  You choose 1 of 4 possible receptacles into which a bouncing skull will fall, but in this medieval Vegas, the house always wins in the end.  It costs 100 coins to play, and a win nets a little less than 300.  If you do the math, you can see that it’s a bad idea to play, though if you’re not above such things, using a cheat code or an emulator with save states can beat the odds.

Ironsword has one more thing that actually worked in its favor: its box cover, one of the most notorious among all NES games.  It features an inaccurately barbarian-clad Fabio posing with a large sword, locks of hair blowing in the wind.  Kids probably didn’t notice or care about the discrepancy with the game much, but it almost certainly helped them when they asked their moms to buy it.

Ironsword: Wizards & Warriors II was fairly well-received when it was released, but viewed in retrospect, it hasn’t aged well and its design flaws are obvious.  While the first game in the series may have been too lenient to provide a serious challenge, this game compensates way too far in the other direction and effectively kills any sense of fun.  Ironsword was a portent of that one later NES Rare game that was infamous for its difficulty: Battletoads.