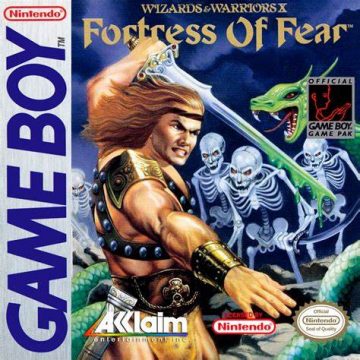 After handing development duties of Ironsword: Wizards & Warriors II to Zippo Games, Rare kept the development of the Game Boy sequel in-house. The oddly numbered Wizards & Warriors X: Fortress of Fear was actually released prior to the NES’ Wizards & Warriors III and is even more of a deviation from the first game than Ironsword was, changing the W&W formula into a straightforward action platformer and mostly removing the exploration. The platforming was never a strong point in the W&W games, and yet it strangely works in favor of this stripped-to-the-basics game, released a mere six months after the portable console came out in North America. The end result is some knight action perfectly scaled for a Game Boy-sized experience.

Best of all, Kuros finally seems capable with a sword! Instead of waving his sword around haphazardly, his basic attack is now simply a jab straight out in front of him. It arguably looks like he’s using a giant dagger, but it’s much more effective in aiming the business end of your attacks. If you hold UP on the d-pad while attacking, he does an overhead swipe, useful for taking out flying enemies. Lastly, his crouch jab is still present, making short work of enemies closer to the ground. That’s it for his arsenal of attacks – there is no weapons you can throw or offensive spells to cast in this game, and his mid-air sword poke is gone, too.

On the defensive end of things, Kuros actually starts fully dressed up for the first time! However, his shield and helmet are merely decorative and don’t imbue him with additional defense or blocking capabilities. There are a few items you can find in treasure chests that will temporarily augment Kuros’ abilities: a shield of protection to halve the damage inflicted upon him, a spell of invincibility, and boots that increase his jump height and prevent long falls from hurting. Speaking of chests, the keys Kuros collects to open them actually for once don’t evaporate into points at the end of each level! They do, on the other hand, disappear from your inventory if you lose a life. What Rare giveth, Rare taketh away.

The story in this iteration is that the evil wizard Malkil hasn’t been heard of for the better part of two decades, and suddenly Princess Elaine has gone missing. (Perhaps she’s the nameless princess at the end of the first game? It’s not clear but would place her close to middle-age by now if so; sadly, always a princess, never a bride). Kuros, without any concrete signs of the malevolent wizard being back, immediately suspects that he took the princess back to the disquieting Fortress of Fear. Rather than ask around for clues first (Rare probably rightly assumed that no one would want to play a medieval-themed detective game), he bounds straight into the castle to knock some heads around.

This plot sets up an interesting distinction from the previous games in the series: the action takes place entirely in and on a castle. There are no caves, no tree climbing, and not a single one of those infernal slippery slopes that plague the first two games. Being in a castle suits the monochrome nature of the game well, as it frees up the level backgrounds to be little more than uncolored backdrops with the occasional stone pattern to remind you that you’re inside a fortress made from stone. Dark cave backgrounds or busy tree patterns would have made the action much harder to make out on a tiny Game Boy screen, a lesson Rare apparently didn’t take to heart when they later created the Donkey Kong Land games.

The graphics are the only time that the W&W series went with a 2.5D perspective. The sprites are traditional 2D but move along floors designed with a three-quarter view, giving the levels a sense of depth that stood out from other portable platformers at the time. Kuros himself is almost a fourth the height of the screen, so his sprite, while tweaked a bit from his NES days, is just as detailed and immediately recognizable. This game borrowed a couple of boss sprites from W&W I, with the bat boss from the earlier game making an appearance as the first boss here, though minus his annoying bat minions. The skeleton boss of W&W I also becomes a regular, though somewhat rare, enemy.

The music is all entirely new, once again created by Rare in-house composer David Wise, and the tunes are usually energetic and upbeat and help propel the player forward. Fortress of Fear has a proper boss theme this time around too (W&W I used a public domain tune, and Ironsword didn’t have one at all), and it’s suitably menacing.

Like its predecessors, Fortress of Fear lets Kuros pick himself up off the ground right where he died, so level progression doesn’t get too frustrating. The game does have plenty of fatal bottomless pits, though, a first for the W&W series and possibly the worst annoyance in the game. Ironsword reduced the number of continues the player had after dying to two, and Fortress of Fear furthers that trend, only now you have no chance to continue after losing your last life! The upside is that extra lives are fairly plentiful around the castle.

Enemy placement and harmful projectiles, while randomized in the previous games, are now fixed, so after repeated plays, you start to learn where everything is and can easily hit the extra life cap of 9 lives before the game’s difficulty starts bringing the count back down. In fact, there are so many projectiles from off-screen, such as flying arrows, axes, and flaming balls, that the mechanics of Fortress of Fear in many ways resemble a basic 8-bit shmup: move to a certain part of the screen, dodge a projectile, attack an enemy, move ahead a bit, duck under the ball of fire coming from off-screen, mow down another couple of enemies, etc.

With this being an action platformer, the level progression is very different from the other W&W games. Generally speaking, Kuros has to go from left to right, eventually coming across a door that ends the level. There are 5 “worlds”, with most having 4 individual levels ending in a boss fight. This sounds vaguely Super Mario Bros.-esque, but there’s a twist: secret exits, sometimes as many as 3 in a single level! These out-of-the-way doors either end a level early, bring you to a bonus area with food and items, or put you at the beginning of the next level like normal, though at a different elevation to get you out of the way of imminent danger.

As such, the exploration in previous Wizards & Warriors games is still present here. There’s no scrolling up or down, so exploring here means looking for walls and ceilings that you can jump over, bumping into secret doors slightly obscured by the pseudo-3D perspective, and waiting a few seconds for hidden platforms to appear over an otherwise untraversable pit. It’s very satisfying to discover these, and they usually contain a stash of food, gems, and/or an extra life.

And extra lives you will indeed need! The game has a reputation for being hard, though not on par with Ironsword. Once you learn where all the hidden areas are and take your time traversing the levels, the remaining challenge is the boss fights. They can be deceptively hard until you notice the pattern of their attacks and find ways to safely dodge them while getting in a few hits each time. Given the medieval theme, initial daunting difficulty, and evade and smack tactics, the boss fights have an almost proto 8-bit Dark Souls feel.

The end result of all this is more than just a pint-sized version of W&W; Wizards & Warriors X: Fortress of Fear is very much its own thing. The core W&W action is present, improved upon, and turned into a pretty fun platformer. The game is long enough to be a challenge, and the difficulty significant enough to keep you engaged for a long time.