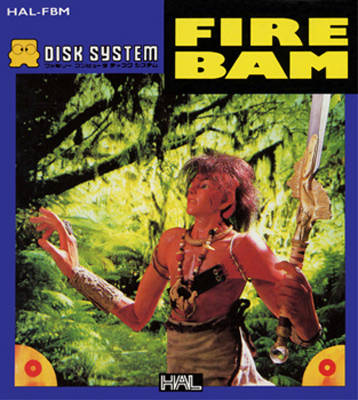 Now this is an odd one: an action RPG released on the Famicom Disk System that not too many people have heard of. Some people are turned away by its garish colors and somewhat cryptic nature, but there is definitely a solid product here, and one with much more substance than you’d think.

Your main method of transportation: a living elevator. Which has no deeper meaning at all.

The game stars Bam, who has to regain the Magic Sword, defeat the clan of the “evil Domes” and “open up” the world. This later term has to do with an interesting twist in the game’s mechanics. When you start the game there doesn’t appear to be anything else besides your home town, where you can save your game and regain energy, by visiting what appears to be a pair of mutated lizards right out of Bubble Bobble… these are actually Bam’s parents, whom he is on a quest to save. You then leave for the woods, which serves as a sort of hub area, but with enemies. These range from weird pink bouncing things to humanoid giraffes carrying giant scissors.

Going around you discover two things. 1.) killing enemies makes them drop fire, which is added to your counter and is actually used as currency and 2.) your starting sword is well and truly useless and with a terrible range. The sword is your main method of attack, and although you do get ranged weapons later on, they’re not effective on all enemies. Thankfully you also get some better swords, with a longer reach and better attack stats. There’s a store system, similar to other action RPGs, where giant reptiles sell you various items for very high prices.

In addition to shops, there’s another type of door you can enter, which will either lead to an action sequence or a dungeon. The action sequences auto-scrolling at an incredible speed and are rather a pain, especially if you don’t have the better sword yet, due to how the enemies come at you from above. Collecting extra health or invincibility is also made difficult by how fast the screen moves and the fact that should an item land behind you it can never be grabbed. At the end you fight a boss, and there are actually seven boss types, although they’re all repeated at least once. After the boss fight a cinema occurs, showing the screen “opening up”. It’s difficult to comprehend if you’re going into the game blind, but these scenes actually mean the world is expanding – new areas get uncovered not only in the woods but in your town as well, resulting in the appearance of new shops where you can buy some much needed gear. It’s as if opening up the pages of a story book; the downside is, due to the repetitive scenery, it gets extremely confusing as to whether you’ve visited an area or not already.

One of the action sequence bosses gets an… upgrade here. Does one even have to comment?

After going through a series of these action sequences you’ll be left with the task of clearing out dungeons. These are entered through the exact same doors, though the dungeons themselves are – obviously – a lot less straightforward. There are dozens of blind paths, elevators going in multiple directions, keys you need to pick up and every place looks pretty much the same. There’s also some difficult jumping sections. Unless you were moving to begin with it’s impossible to induce forward momentum after jumping; it’s unlike Mario, and more akin to Ghosts ‘n Goblins or Castlevania. Jumping from a stationary position results in a useless upwards climb and then descent, which is especially odd, because if you crouch you can perform a rather tall high jump. This means you absolutely HAVE to be running when making a jump. Unfortunately due to the layout of dungeons there are short ledges you need to reach, but because there’s a platform directly above them, you need to perform a precise pixel-perfect running leap in order to avoid the overhanging ledge. Touch the ledge and you fall down, forcing a re-attempt. This kind of easy short jump is common in every platformer, but in Fire Bam it’s elevated to an infuriating new level.

Defeating the dungeon boss will result in the same expansion of the game world, with one exception. Once you face the final boss you need to get yourself killed, because you won’t have the Magic Sword yet (annoyingly this takes away a life and is unavoidable). Clearing all the dungeons replaces the red lizard thing with a woman who gives you the Magic Sword with which you can finally put that satanic gremlin in his place.

Fire Bam is an interesting game, but the dungeons are mazes that can get ridiculously extensive and annoying to complete without a walkthrough. Interestingly enough this was one of the many games released by Hal Laboratory, makers of Kirby. The game’s director and character designer, amongst other things, was Pikio Midorikawa, whose only other credit was Eggerland: Meikyuu no Fukkatsu.