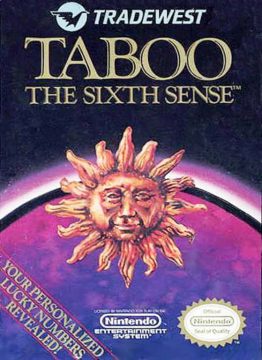 1983 was when I, Robot hit arcades with its prototypical 3D graphics, but it also came with a curious secondary mode billed as “Doodle City: The Ungame.” All it involved was painting the screen with models of all the different shapes and characters. It wasn’t much of a game, but at least it was honest in its description. It would only cost a quarter or two to fiddle around with Doodle City, and it was neat to have something experimental like that bundled alongside the main game. Fast-forward six years to an “ungame” called Taboo: The Sixth Sense being released on the NES for what was presumably full price, then skip ahead many more years later when it’s considered one of the worst things ever released for the system. It’s a bit of a snap judgment to consider Taboo a bad game when it’s barely much of a game at all, and it’s surely one of the most unique things released for a Nintendo system, but its premise more than esoteric enough to qualify it as a kusoge. 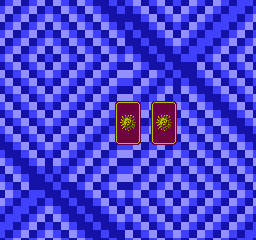 The game was made by Rare, the eventual developers of Donkey Kong Country and GoldenEye 007, who some people hail as one of the greatest game companies of all time. Some people also forget that they actually made quite a bit of crap in their NES days, though that was overshadowed by the likes of Wizards & Warriors and Battletoads. Every company has had their dark days, like when Rare made Who Framed Roger Rabbit and Beetlejuice for the reviled LJN or all those dubious home versions of game shows distributed by GameTek. Taboo isn’t quite on the level of those crappy licensed games, but it’s hard to determine exactly on what level it’s located. Most of its kusoge factor is seen through a back-in-1989 filter where it would cost $50 to purchase a fresh NES game. 1989 may have been the biggest year for the NES in North America with gargantuan releases like Super Mario Bros. 3, Mega Man 2, Ninja Gaiden, and DuckTales among others. A virtual fortune-telling machine whose gameplay merely amounts to typing in a few things without offering so much as a single minigame had no chance of stacking up alongside these heavy hitters.

Before you get to the “meat” of the game, a brief preamble calls Taboo “the time machine on Nintendo,” a phrase which could be considered false advertising. You then enter your name, date of birth, and gender, then you get three lines’ worth of space to ask Taboo a question. And… that’s all there is to your input until the end. You’re treated to a seizure-inducing sequence where a deck full of tarot cards is shuffled in front of some psychedelic demoscene background. Ten cards are drawn and you’re told what each one means and how it ostensibly pertains to your future. If you don’t know a thing about tarot, it’s a type of card set that’s often used in divination, where each card has a significant meaning and may predict an aspect of somebody’s future. Gamers are probably familiar with the Major Arcana set of tarot cards which have appeared as motifs in more recent games, like House of the Dead, Persona, and the Binding of Isaac. There’s also a Minor Arcana which is more or less comparable to a standard deck of playing cards, and Taboo has the whole deck of seventy-eight at its disposal. And after it’s done reading you your fate, you enter a bit of data to get six lucky numbers, just in case you’re into lotteries and raffles and all that jazz. 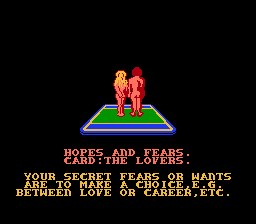 Basically, if you’re a hardcore skeptic, Taboo is one of the worst things in existence. If you don’t know anything about the tarot, then Taboo will look like a waste of money when you can be pogo-ing around with Uncle Scrooge on the Moon. If you’re really, REALLY into fortune telling, then Taboo may actually be worth a glance to see how it does things, but it’s hard to justify paying more than a couple of bucks for it unless you want to “see your future” multiple times, only to find that each reading will likely be different than the last even if you enter the exact same thing. It’s probably worth trying once by anyone just to see one of the strangest things ever released for the NES, but almost everyone is likely to lose interest after their first reading. Though to its credit, it does have some fantastic cuts of music by David Wise, whose tunes are usually the least bad thing of even the worst Rare game. There are also interesting graphics for the cards, like how the Hanged Man drops in from above and how creepy the cards for Devil and Moon are. 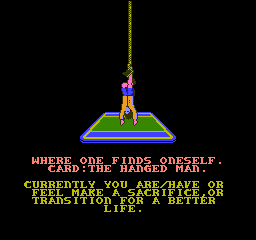 Shock and awe, but there’s even a bit of nudity in three of the cards, something normally banned by Nintendo of America. Strength depicts a naked woman on the back of a lion, the Lovers shows a nude man and woman from the back, and the High Priestess is topless and holding an ankh, doubling up with another Nintendo no-no of referencing to religion. The Hierophant can also technically be considered a religious reference, as that card is also known as “The Pope” in some translations. Besides these unsafe-for-children tidbits, Taboo purportedly attracted a bit of controversy at its time of release for being considered a “mature” game due to the nature of tarot being considered occult by some. If more people gave a damn about it, it could have been banned from public retail and sanctioned by Congress, but not a lot of people really cared about its alleged devilry. It faded almost as quickly as it arrived and is mostly remembered today as a curiosity and an exhibit of censors being asleep at the helm. Rare has released worse in the eighties, but Taboo, if not their worst, is definitely their most offbeat.