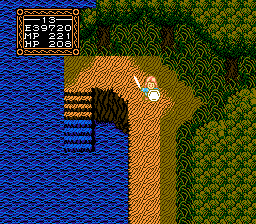 The last of the three Willow variants appeared on the NES. Like the arcade version, it was developed by Capcom, but is a completely different game in every way two games could possibly be different. It’s the most interesting of the bunch because it raises quite a few questions, and is also ridiculously good for a licensed game.

It seems as if Willow at some point or another was an entirely different game that was transformed into Willow when the need to make a Willow game on NES arose. Aside from inserting a few characters from the movie here and there, the game has almost nothing to do with the movie. This isn’t necessarily a bad thing though. Sure, it doesn’t follow the source material, but what’s more important, staying true to a source or being good? Capcom definitely went with the latter on this one. Willow’s story starts off with a legend about two Goddess who bestowed upon the people the power of magic. One of the Goddesses, Bavmorda, becomes corrupt and tries to take over the world. The other, Fin Raziel, prophesizes that a hero will arise to defeat Bavmorda. That prophesized hero is Willow, who must now embark on a quest to do just that. 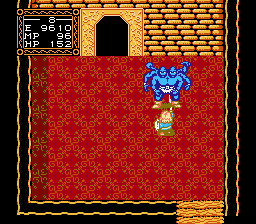 At first, the adventure is somewhat aimless, and you wander around helping various people with their problems, like most RPGs. Exploration is done in much the same way it is done in Zelda, from an overhead perspective, traveling from screen to screen and dealing with the enemies and obstacles on each screen. The major difference between Zelda and Willow is that Zelda has regular dungeons, whereas Willow’s quest is primarily done on the world map with dungeons placed more sporadically and feeling a bit more unique, more like the later released Crystalis.

Willow fights with a sword and has various forms of magic at his disposal, such as fire, lightning, and acorns that turn enemies to stone. Willow’s sword attacks, and even the animation of the attacks themselves, are almost identical to Link’s from A Link to the Past. The funny thing about that is that Link to the Past wouldn’t be released for two more years. One interesting aspect of the swords is the concept of weight. Each sword weighs in differently, and thus affects the speed at which Willow can swing it. But as he gets used to using a sword, it’ll feel lighter and he’ll be able to wield it with more agility. The execution of the spells is similar to the spells in Ys II. There’s even a spell that lets you transform into a monster in order to talk to other monsters and get information from them. Considering that Willow also has EXP levels, this game is something like a combination of Zelda and Ys.

Willow is fairly long, substantially longer than most games of its ilk available at the time, and while it doesn’t go into the puzzling depth of Zelda, it doesn’t get repetitive either. The combat is fun, the boss fights are challenging, and the overall structure of the game is highly enjoyable. 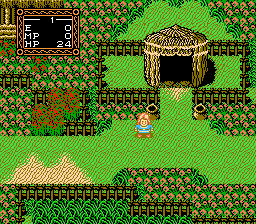 Willow also deserves praise for its presentation. The graphics are almost beautiful for an NES game, using vibrant colors and very clean character sprites that stand out from the backgrounds. The most impressive effect is when a group of enemies appears on the overworld. The entire background suddenly animates and the music changes to a horrific battle theme. The grass and trees in the background blow violently in the wind and other atmospheric effects can be seen in different areas of the game.

The music is particularly good as well. The main overworld music is just as thematic and hummable as the main theme in Zelda, and the way it remixes when enemies appear is just brilliant for a game of that era. Even arbitrary tunes like the theme for the houses are very well composed and memorable.

Willow combines a great quest with spectacular visuals and a very competent soundtrack to create one of the best licensed games on the NES, and a game that holds up to the competition (i.e. Crystalis, Zelda).