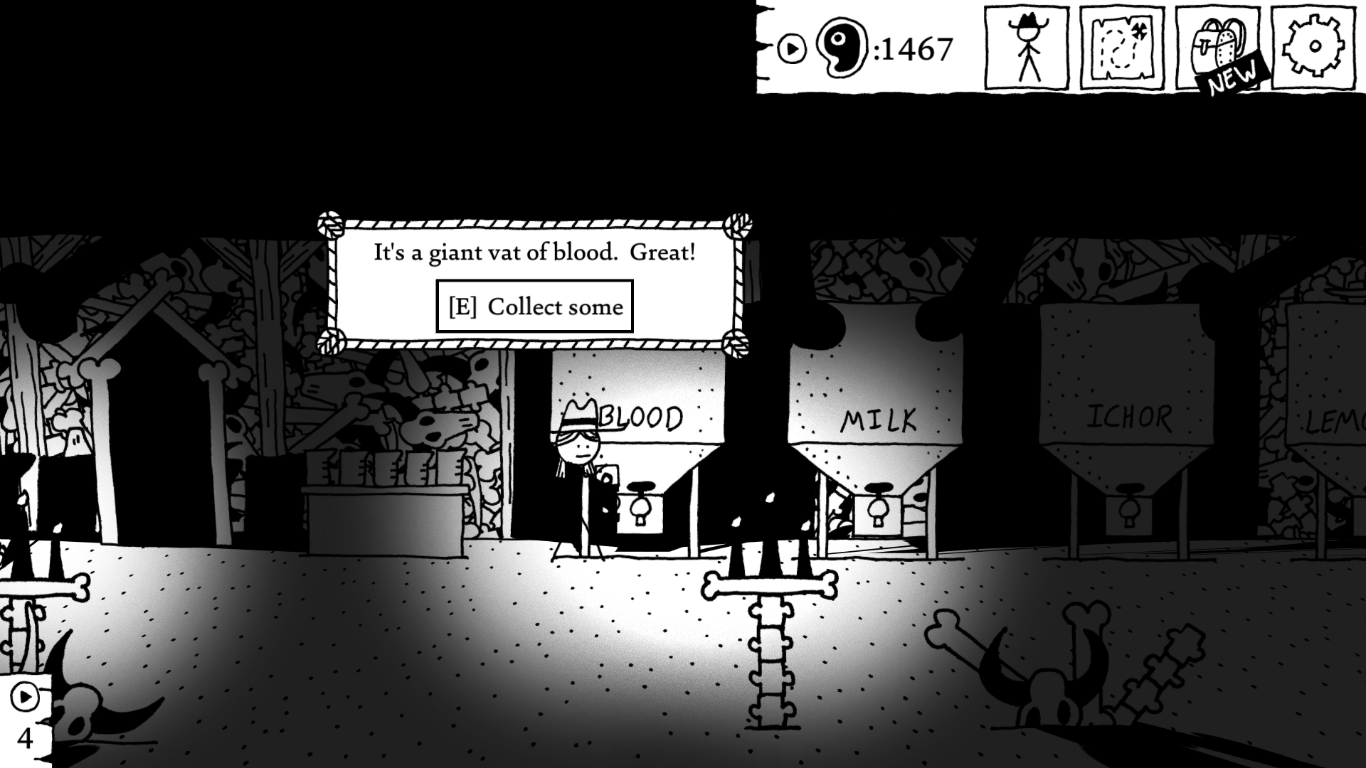 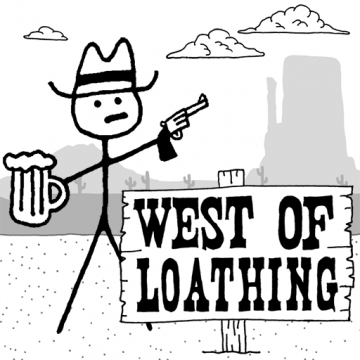 In 2003, Zack Johnson and his Asymmetric Productions launched the single greatest MMO ever created and ever will be – Kingdom of Loathing. It was a terrible looking game of stick figures and scribbles, where your classes of choice included “seal clubber” and “accordion thief.” Your main currency was “meat,” and enemy types included the likes of ASCII smileys and zombies but with the name misspelled because of magic. There’s a boss you can fight called Man Made of Bees and he is a man made of bees who says that he is bees and hates you. It’s still going to this day and shows no signs of stopping, the ultimate pisstake for the RPG world.

That makes West of Loathing, a 2017 spin-off taking place in the 1800s wild west, a bit odd. The attempt by Jick (Johnson’s name in Kingdom of Loathing) and team was to create a single player Loathing experience, but this did require a few tweaks to the tone and writing. While playing through a crude joke is hilarious when you’re doing it with countless strangers, the novelty would wear itself out in a single player narrative heavy experience, so West tried balancing a solid narrative framework with the humor of the MMO. This could have easily been a case of trying to entertain a wider audience and failing, but West of Loathing managed to strike the balance and made for an engrossing single player RPG with satisfying choices that just so happened to include ghost pickles that turn you into a ghost for a day and inheriting your grandmother’s briefcase filled with snakes. 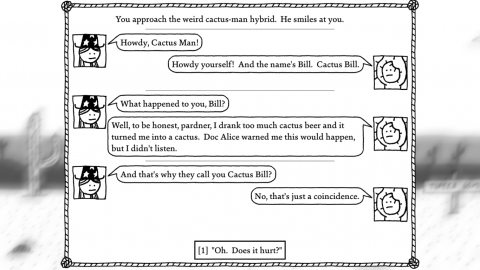 The game cast you as the kid of some poor farmers who decides to go west for one of three reasons you get to decide on (helping people, money, or adventure). You also get to choose a class, each getting different out of combat options, including the kinds of crafting you can do and your given way to solve problems. After a stop in the barely existent villa of Boring Springs to find a traveling companion, you find yourself in the growing town of Dirtwater and join the railroad company to help them move the tracks further west. Oh, and if you want, you can do less interesting side stuff like fighting demon clowns and hell cows who wish to bring upon the apocalypse, not to mention that cult making all those skeleton soldiers or that other cult obsessed with spirals that may or may not be connected to ancient alien ruins and an old god. You can bring along a crazed miner, ex-rancher out for revenge, drunk doctor also out for revenge, or a mischievous goblin who wants to explode himself in order to reproduce. Yeah, goblins are like fungus here.

Despite being apart of the Kingdom of Loathing universe, West of Loathing doesn’t use that as an excuse to phone things in on the presentation end. It’s still stick figures and goofy doodles, but now there’s an actual graphics engine that creates 3D spaces for a pop-up book look, with shadows that shift with light sources. There’s real defined depth, and that keeps the world interesting to look at for long stretches, tricks with shading and shapes used to craft defined cultures through architecture and effects. It’s subtle, but that touch of detail really adds a lot, as does the epic western score (and player piano cover of Cotton Eye Joe). 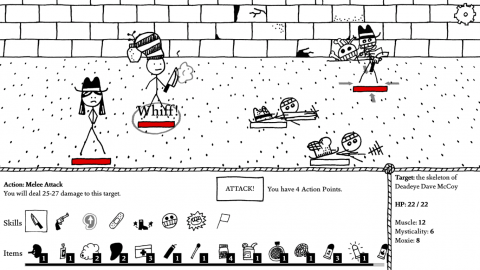 The game plays like what you’d expect a modern RPG to play like, though on a 2D plane with a turn based combat system (bringing comparison to Paper Mario, though there’s no button inputs to worry about in fights). You travel around, talk to people, get quests, do them, and so forth, but there’s also a ton of hidden stuff for you to find if you so choose to get curious. All the writing is fantastic, with plenty of out and out jokes mixed with a proper grounded scenario and dialog writing that sometimes gets used to build up to a punch line. The Shaggy Dog Cave sticks out as a highlight, as does a hidden treasure in an early game mine during the prologue. This is still a Loathing game, so while some elements are played more straight, you can expect the game to mess with you a bit and not always give you the reward you’ve been trained to expect from other RPGs.

There’s a surprising amount of freedom in terms of role playing, as that motivation you give at the start decides how experience or meat is given out. You get meat bonuses if you go looking for riches, while adventure or caring style players get experience bonuses by playing into those archetypes. Even more unexpected is that playing as a nice person feels strangely mature, lacking any ridiculous subversion for going about and doing good deeds for the sake of it. There’s still plenty of dark and cynical humor, but it never drowns out how you want to interact with the game world. Choices also do get proper resolution in the ending, like any good western RPG, and some quests and sub-plots have parts to them you can easily overlook, resulting in very different wrap-ups. 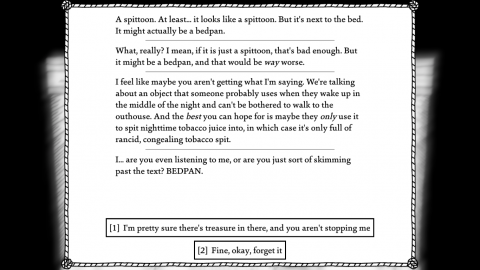 The battle system is on a grid, with you and your partner automatically setting up based on your class. You can pick from cow puncher (warrior), beanslinger (mage) or snake oiler (thief), and all three classes are more complex than you’d initially expect. The cow puncher gets a lot of abilities to do and soak damage, so much so that you feel like a force of nature, though you lack many non-offense options. The bean slinger gets a wide breathe of spells with different uses, giving them plenty of versatility to fit in with any scenario or partner. However, the snake oiler can be turned into a gunslinging machine or a deadly master of poison with their briefcase full of snakes, letting them harvest poisons and healing items. They can even stack poison damage to chip at large foes.

It’s a simple battle system for some classes, more complex for others. It all depends on how much your character needs to use their special moves or spells, which take action points. These do not replenish during battle, so you have to think ahead and decide on the best use of your moves and avoid leaving yourself open for punishment. Invest in them early on, especially if you plan on going beanslinger. The one big issue outside the unlockable hard modes is that the game showers you in experience and consumable items that give day long buffs, only canceling upon going to sleep or failing enough fights in a day. This means you can become vastly over-leveled very quick, depending on how much side stuff you do. The game tries to balance this by having auto-XP spending on by default, though it’s recommended to turn this off. It creates a balanced character with no real specialties, which throws off strategic possibilities. 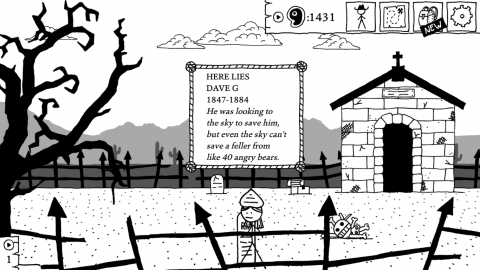 The game has a dizzying amount of content with little unwanted fat, with a really full playthrough lasting up to fifteen hours or so, making replay easier to see different quest and decision outcomes. You do come across the issue of some RNG randomization, but you can trigger the events you want more often with the horse you pick at start and through special items you find through the game. Just remember you cannot re-buy items you sold to a vendor after you leave the vendor once, as this causes an instant refresh, and the game does let you sell quest items. Prepare to hoard if you want to complete as many quests and side content as possible (though the game does kindly label what little vendor trash you find).

There’s also DLC to look forward to, as one new campaign has already been added. Called Reckonin’ at Gun Manor, the campaign has you exploring a haunted mansion and solving its many crafty puzzles. More is planned for the future (supposedly to add actual content to the empty late game desert area), showing the game has a long life ahead of it. It’s one of the most fresh feeling RPGs out there, and absolutely worth looking into if you want a good laugh or an engrossing role playing experience. What other game will question and mock you for wanting to put your hand in every spittoon you find? THERE COULD BE TREASURE IN THERE, GOSH DANG IT!