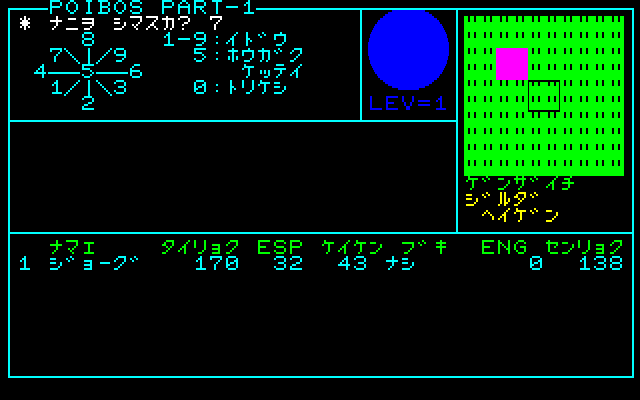 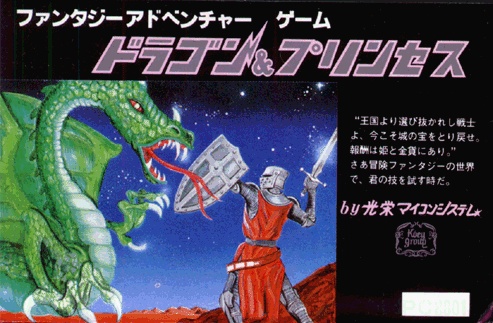 Greetings! The above is actually the cover for Dragon and Princess, which we already wrote about, but we couldn’t find a cover scan back then. Well, here it is.
Circumstances have put this series on halt for rather long breaks, but in the meantime we’ve come upon a bunch of more games that don’t justify a dedicated blog bost, because they’re unavailable, unplayable, or otherwise elude a more detailed examination. Without further ado:
Tokugawa Ieyasu 1. Shounen hen (徳川家康 1.少年編) – MZ-700, FM-7 (1983)

This was supposedly a very early game we’ve missed before. As the numeral implies, it was meant as the start to a whole series depicting the live of the famous-infamous warlord Tokugawa. This first episode deals with his youth, but it’s easy to see that it doesn’t take things strictly historical and young Ieyasu fights monsters made out of extended text characters. Apparently there was a second part, which was more of a strategy game, reflecting Tokugawa’s rise as a warlord, but that seems even more obscure than this RPG. 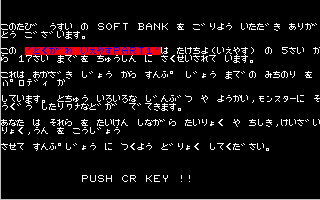 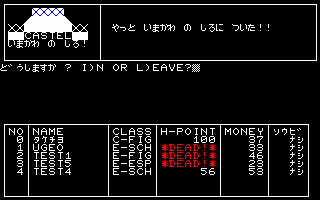 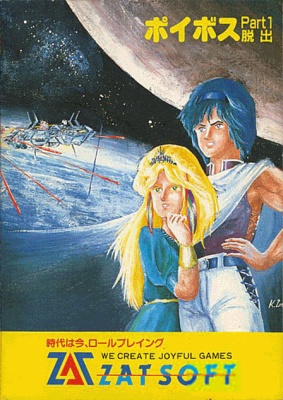 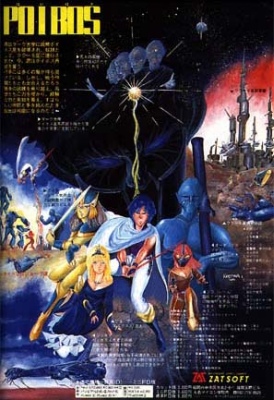 Poibos Part 1 – there never was a part 2 – is notable for probably being Japan’s first RPG in a SciFi setting. The advertisement clearly channels Star Wars. 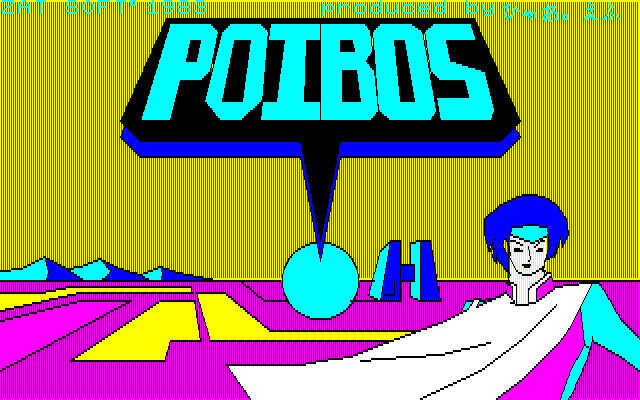 The tiny graphics window doesn’t betray much of the setting, though. In case that isn’t clear from the very minimalistic graphics, it shows a top-down view of a planet surface, where the player (the hero starts out alone but apparently can recruit companions later) can move around freely. 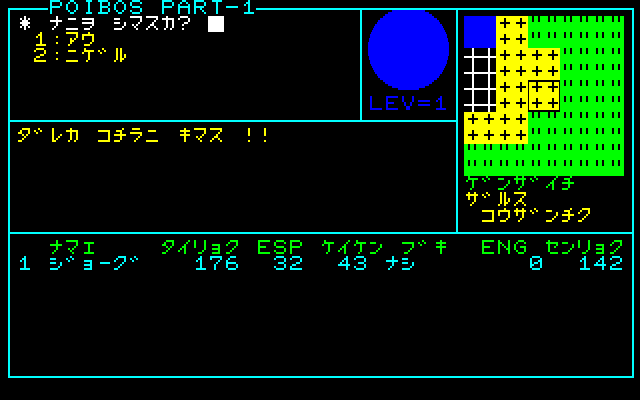 Every few steps occurs a random encounter, which offers some options, but always seems to result in a fight or the player’s escape. The odds are stacked severely against the player, however, and it seems impossible to survive more than two encounters. Without any apparent means to heal or find companions before dying, this has turned into a very short trip. 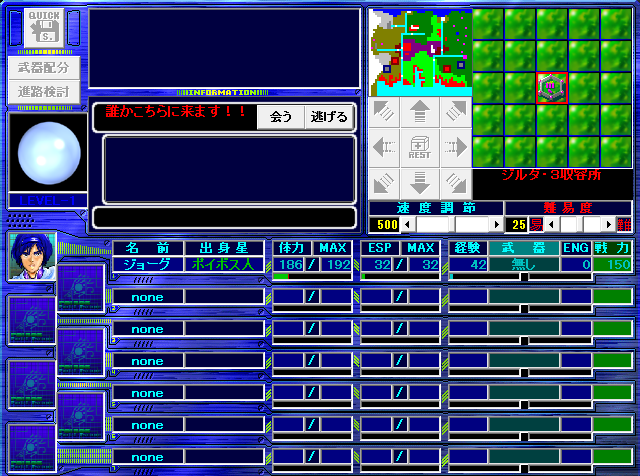 Around the turn of the millennium, there was actually a fan remake of Poibos Part 1, which offers a glimpse of hope in the form of selectable difficulty levels, but since it was made A) for a Japanese OS and B) old versions of Windows, it reliably crashed upon every single encounter during testing.
Parallel World (パラレルワールド) – X1, PC-88 (1983?) 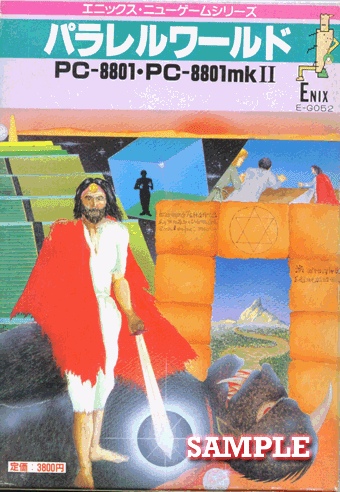 Parallel World is notable as the first RPG published by Enix, although the later Dragon Quest crew had nothing to do with it. It’s also about the only RPG that was first programmed for the Sharp X1, which among Japanese computer enthusiasts was more known for its arcade ports. It was programmed by one Toshiyuki Nagase, and the back of the box advertises it as “A true role-playing game with 26 verbs, 100 characters, 10 monster types, 20 types of food, 26 swords, 26 crystals, 21 dungeons and 100 ilnesses”, where the player would travel between 7 parallel worlds.

A tape image of the PC-88 version could actually be found, but in the only emulator that supports tape image files, it crashes right after the title screen (which contains the hilarious message: “Loading Data. Please wait 15 minutes”). 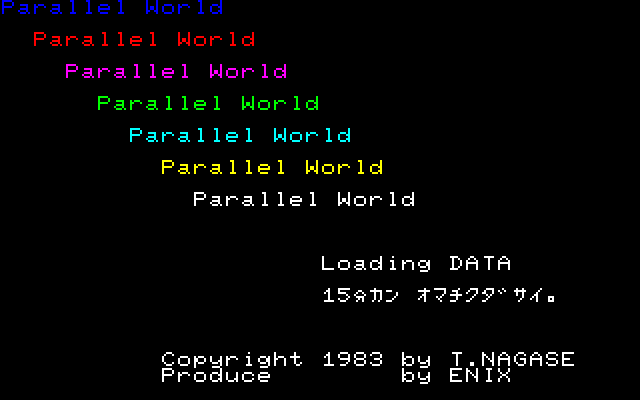 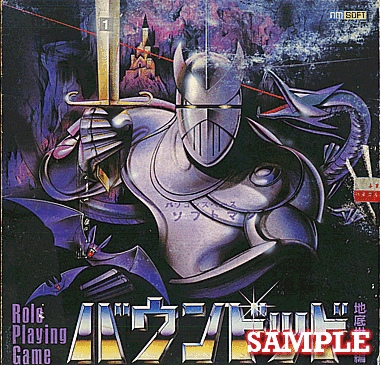 Bounded by the little known Nihon Micom seems like a more typical fantasy RPG, once again mostly using a text-adventure like interface with just a tiny graphics window. We could never find a disk image of it, so there’s not much else to say. The screenshots below say they come from a “vol. 2”, but we got no clue what that actually means, as the Japanese databases only seem to list this one title. 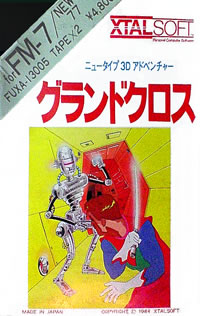 Another very elusive game, this one was made by Xtal Soft, whom we shall meet again several times later in this series. It appears to be a SciFi dungeon crawler with more of an adventure game angle. 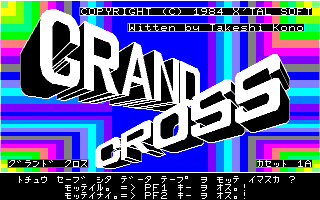 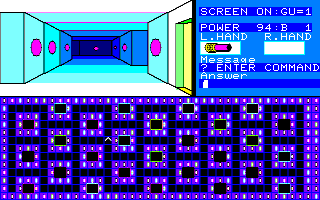 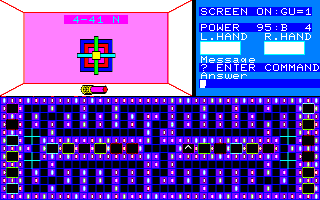 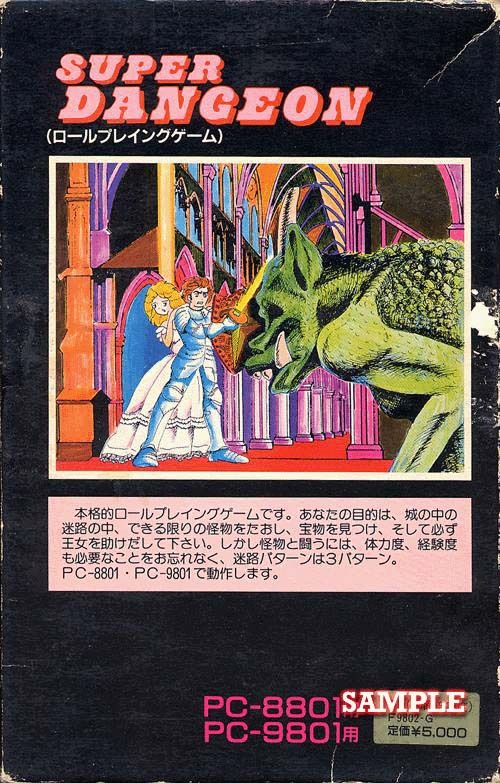 Published by Fuji Onkyou RAM (yes, we’ve never heard of them, either), the hilariously misspelled title is a wireframe dungeon crawler. Once again, that’s all we’ve got. 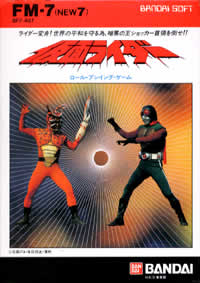 Kamen Rider of course is based on the seminal tokusatsu show. The game tie-in by Bandai seems to have been a rather typical dungeon crawler, but with huge sprites showing the hero and his enemies fighting. 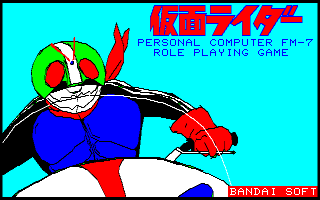 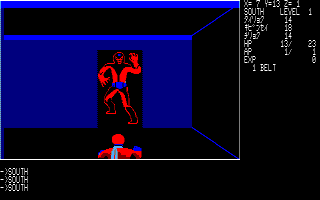 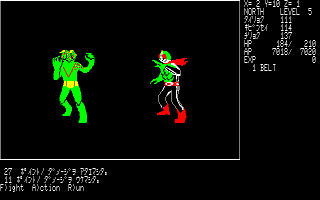 Some Games We Cannot Play (Dark Age of JRPGs)