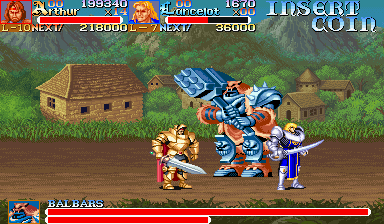 Of the three arcade beat-em-ups Capcom released in 1991, it’s easy to get the two fantasy-themed ones confused. The King of Dragons is sort of a successor to Magic Sword, borrowing RPG themes and heavily borrowed from Dungeons & Dragons, while Knights of the Round is a slightly more grounded take, focusing more on the swords and less on the sorcery, and also plays a little more like Final Fight with swords. The game puts you in the role of King Arthur and two of his most faithful knights as they venture through the British countryside to take back the Holy Grail from the evil Garibaldi.

The King of England, who pulled the mystical Excalibur from its stone. He’s the average, balanced character, and has an upward swing attack.

Lancelot’s saber is fast and has great reach, but isn’t all that strong. He also has a special somersault kick.

Perceval’s axe is strong but has short reach. He’s an odd character since technically he’s the strongest, so he should be the slowest, but he’s also the only character that can dash (at short lengths). 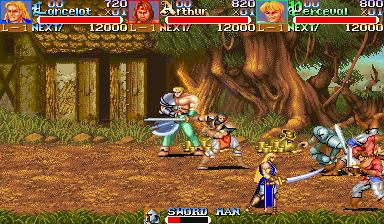 Since all of the characters have their own weapons, there aren’t any secondary weapons to pick up. Instead, there are occasionally horses you can ride, which increases your speed and attack power (though Perceval is at a disadvantage due to the short range of his weapon). They can not only leap on top of enemies hordes but can be commanded to stampede forward and knock down anything in its path. (Of course, after this, the horse is gone.) There’s no grappling system at all, which does make the game feel a little limited. Like The King of Dragons, you can block enemy strikes by pressing backwards and attack, or perform super swings by pressing forward and attack. Being able to counter enemies is almost essential for some boss fights, but the timing for both of these moves is so tough that they’re hard to pull off consistently. The trick is that you have to press the button and then immediately hit a direction afterward, hoping that your timing is right. Arthur and Lancelot’s secondary moves are executed by pressing up and attack, while all three have the usual health-draining crowd control move.

Also like The King of Dragons, there’s a level-up system tied to the score. There’s a unique scoring system where the multiplier increases if you continue to kill the same type of enemy. An interesting idea, but in practice, the game is always sending you different types of bad guys so your combo can rarely get too long anyway. Countering or using powerful strikes also increases the odds of them dropping items too. Plus, you can attack certain treasures and they’ll divide into smaller ones, leaving more score items that will (usually) grant more points separately than if you’d just grabbed the single item. Leveling up increases your stats and restores your health, plus your knight’s appearance changes over the course of the game. Arthur and Lancelot don progressively cooler suits of armor, while Perceval goes through the largest change, somehow losing his hair and growing beard immediately upon attaining the proper level. 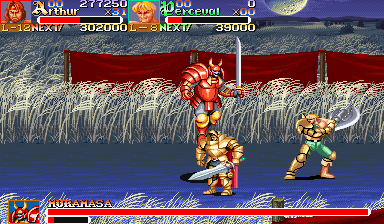 The game is less fantastical than games like Golden Axe, so the types of enemies are largely relegated to different kinds of armored knights. It’s not exactly historically accurate in its setting of course – there’s a Japanese knight here named Muramasa (that somehow ended up in Britain) who uses magic attacks, and the mechanical Iron Golem is obviously far beyond medieval technology. While other Capcom games open each stage with a map that shows the route though each stage, here the level is introduced with a tactical war map that shows the stage in its entirety. If upon running out of lives, the continue screen will also show your progress through the stage.

With the awkward mechanics and (relatively) humdrum characters, Knights of the Round is on the lesser tier of Capcom beat-em-ups, but it’s still as solid as ever, and the visuals and music are still excellent even if they lack creativity. 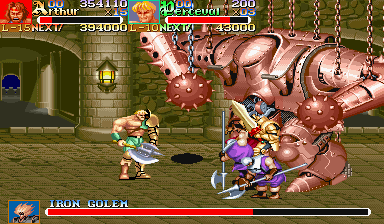 Knights of the Round was also ported to the SNES. The number of simultaneous players was downgraded from three to two, the visuals are slightly downgraded, and there are less enemies on screen. However, it adds a separate block button, so it is quite a bit easier to play. The game also shows up in emulator form on Capcom Classics Collection: Reloaded (PSP), Capcom Classics Collection Vol. 2 (PS2/XB) and the Capcom Beat’em Up Bundle (PS4/XB1/Switch/Windows).

Incidentally, Arthur is also name of the hero of Capcom’s Ghosts ‘n Goblins series. In the mobile spinoff game Gold Knights, he’s joined by two other warriors, Lancelot and Percival. This could be a callback to Knights of the Round, though since they’re historical characters anyway, it could also just be coincidental. 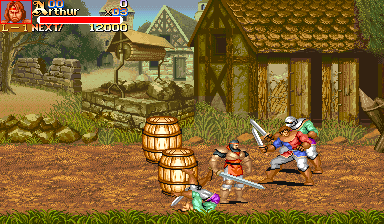 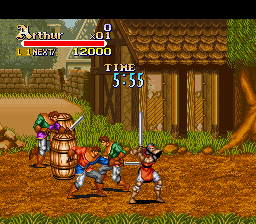