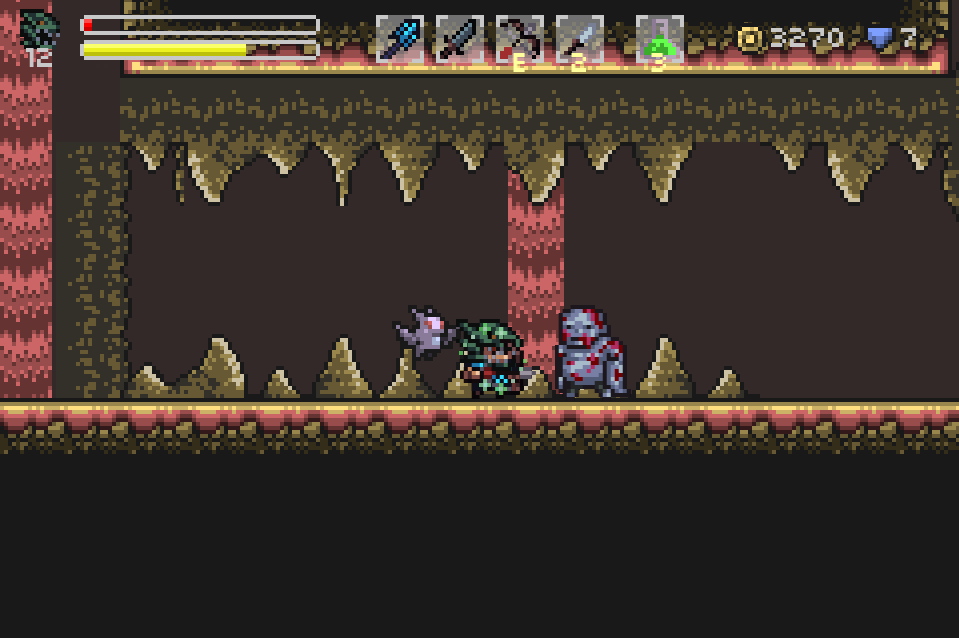 Evil Hazard looks typical at a glance, but offers a very challenging experience despite being a little rough around the edges. The game, Pixel Blitz Studios’ first, aims to duplicate the tension and difficulty found in classic side-scrollers like the Castlevania series, at which it mostly succeeds. While the game offers many weapons and pieces of equipment to take advantage of, its protagonist is always just a few small hits away from death. This glass cannon approach to action design has slowly crept its way back into the mainstream over the years with big hits like the Dark Souls and Bayonetta series. Its presence in Evil Hazard helps the game live up to its purportedly brutal difficulty.

Evil Hazard also lives up to its name thanks to the many obstacles and traps scattered throughout its world. These are all highly damaging and require good timing to escape completely unscathed. Several of the levels also offer a few different paths to take to reach various extra weapons. Mastering each of these weapons is important, as each one is alternately vital or useless depending on the situation. Evil Hazard can only officially be played with a keyboard, and there is no way to reassign what keys take what action, but it’s very easy to pick up. On top of that, they H key can be pressed at any time to bring up or dismiss a helpful list of the game’s controls. The accessible action and weapons make for a game that’s easy to learn but difficult to master, allowing Pixel Blitz Studios to go nuts with the enemy layout. Like in classic platformers as well as notoriously hard contemporary games like Demon’s Souls, players will rarely be confronting more than two or three enemies at a time, but the layout of the area quickly positioning oneself with the right weapons in hand makes each encounter potentially lethal.

The game’s graphics are successful, easily evocative of many of the most iconic classic fantasy games like Castlevania and Final Fantasy IV. While many of the sprites and weapon designs may seem a bit too familiar, however, the pixelated backgrounds are much more interesting. They recall the dreary and claustrophobic visuals of many NES and Commodore 64 games like Faxanadu or Castle Master but without the constant flicker and uneven movement that often accompanied them. It’s also always a pleasure to see different armor and weapons actually appear on the character ingame. All of this gear can be upgraded (along with the character’s own attributes) at certain points throughout each area. This is a great feature for a game with such high difficulty as new players can focus on improving whatever aspect of the game will make it more accessible, while more experienced ones may opt to limit or skip the upgrading entirely. 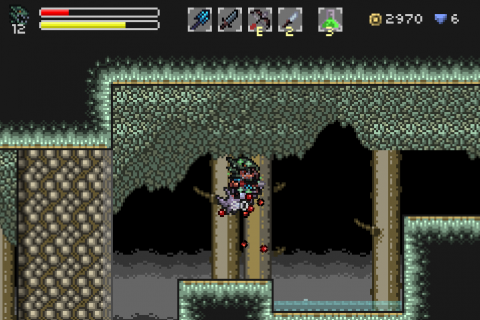 Two thing that hurt Evil Hazard, however, are its music and its hit detection. Each level is accompanied by a different short loop of music that doesn’t really go anywhere. While the variety of styles ranges from industrial to more serene, complementing each area of the game, each track is extremely repetitive and short. In a game built around playing the same area repeatedly the soundtrack will quickly wear out its welcome. The game’s sound effects being so typical do little to help, and given the variety of weapons and enemies in the game a more distinct sound effects set would add more personality to each and help the game stand out more than its current soundtrack. While atmosphere is not the game’s strong suit, sound effects could go a long towards making up for what some would see as a lack of style in the game’s brusque introductory text.

The hit detection can be a bit more frustrating for players, as the spear one starts the game with must be used very precisely to actually hit enemies. Shortly into the game, however, a sword and bow will be found, the latter of which is much easier to wield. Since enemies do not react to any attacks landed on them, it’s much safer to use the bow as one doen’t have to get near them. Also, among the obstacles encountered among the game’s assortment of spiky pits and crushing ceilings, are continuously spinning stone hammer mounted into the walls. These must be carefully jumped over or walked under to avoid taking damage, in theory. Often these will pass through the player harmlessly, and there seems to be no real pattern as to what causes this.

Despite those issues, Evil Hazard‘s level design and difficulty makes for a fun game, well worth the low price it currently goes for on Steam. It’s relatively short length and mid level checkpoints also make it well suited to playing in short bursts to further master each level and experiment with its different weapons.